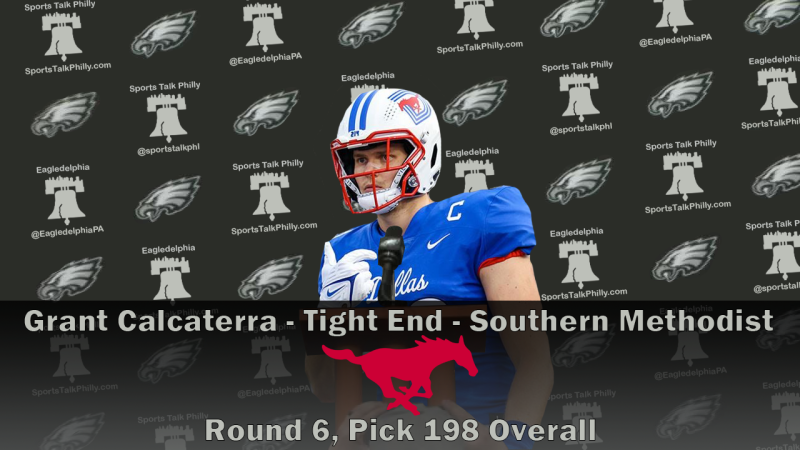 Of course, it’s been reported that JJ Arcega-Whiteside is switching to the position to add another to the competition.

With pick 198, the Birds added SMU’s Grant Calcaterra to the fold for that spot, as well.

Calcaterra spend three seasons with Oklahoma before retiring in 2019 due to too many concussions (he was a teammate of Jalen Hurts for a brief time). Although he planned to be an EMT, he decided to return to football and played for Southern Methodist in 2021.

He served as a team captain and put up 465 yards in his return to the field, adding four touchdowns to his stats in an offense that was not particularly high-powered.

His skills are his route running and processing capabilities; he’s essentially a highly studious player so excels at the cerebral aspect of the game.

Surprisingly, he has not played much special teams – something that is often common with prospects that excel in this area.

With his concussion history and having previously retired because of it, it’s fair to make that a major red flag, particularly for someone who’s thinking is the reason they could excel.

He also does not seem to have the speed or strength that would allow him to fight through contact or break/miss tackles, so that’s an area the Eagles coaching staff will certainly look to address.