If you ask the Philadelphia Phillies faithful their thinking on the bullpen, what answer would I expect? The loudest! Usually, many comments occur when a reliever has a bad outing; and knowledgeable fans question Dave Dombrowki, PBO (president of baseball operations), for this hurler being on the 26-man roster.

The Phillies and other franchises measure relief-corps success differently from their supporters, barring an exception for ones they like. Realistically, though, organizations don’t expect all good performances from everyone, but some fans have expectations an All-Star couldn’t achieve to their liking.

“Some days you tame the tiger, and some days the tiger has you for lunch.” - Tug McGraw

Addressing the ugly coyote at the Bank is first. Basically, James Norwood either had a poor outing or threw imprecise strikes counting on his defense. And Corey Knebel wasn’t ready for a save with a six-run lead and three outs remaining. However, Ricky Bottalico remembered his similar shut-it-down inning.

With a basic plan, Joe Girardi wanted Norwood to regain his confidence after his poor outing on May 1 against the New York Mets, and a six-run lead was a chance to fix Norwood. Unfortunately, things went sideways to everyone’s shock.

Because most have never experienced climbing an entertainment or sports mountain, they can’t fathom the work, sacrifice, and luck involved. With success at Double-A, the summit is visible halfway up the mount, and I experienced that in the recording industry. So, I respect every player wearing a big league uniform.

Management considers acceptable (bend without breaking) performances for all hurlers in four of every five opportunities or 75 percent over a full 162. Moreover, each new reliever per game increases the possibility one will have a bad appearance except for rarities.

Baseball has some misconceptions due to color and postgame analysts using certain phrases: It’s his job doesn’t mean any poor outing is unacceptable. Yet, knowledgeable fans remember every bad performance, which produces a magnified negative view of any moundsman due to half information.

Judging bullpen pieces by their ERA can be misleading if it supports a fan’s negative belief on an individual or everybody. And although two innings took the pen ERA from 3.90 to 4.50, it increased Knebel’s ERA from 0.87 to 3.27, and Norwood’s last two appearances of one out each before Sunday upped his ERA from 2.87 to 10.29.

While Nelson (two) and Bellatti (one) have options, Norwood has none. And these three hurlers are on the roster because Bailey Falter is at Triple-A, while Sam Coonrod and JoJo Romero are on the 60-day injured list since March. For now, Falter is there as a starter with inevitable doubleheaders ahead.

Brogdon was also there after decreased velocity on his four-seam fastball from an average of 96.1 mph to 94.4 mph. Due to COVID-19 protocols for Zach Eflin and Zack Wheeler, however, Brogdon –not his fastball speed– is back. He had  a 1.59 ERA with one save at Triple-A and could replace Norwood.

Phillies Demoted Relievers through May 8:

For the sixth and seventh innings, Jeurys Familia, 32.5, is no longer the dominant fireman of 2018; but he’s not pitching in the ninth frame either. Currently, Familia has eight good and acceptable outings out of 10 or 80 percent. Despite that, though, some are leery of him.

Flamethrower Jose Alvarado has a sinker and control issues, but most relievers are there because of command difficulties. Otherwise, they’d have a rotation spot. But he has a 3.12 ERA for 8 ⅔ innings, yet he can either give up a run or allow an inherited runner to score.

Phillies Relievers through May 8:

* Southpaws  ** His addition lowers the total percentage from 75 percent.

In top form again, fireballer Seranthony Dominguez has had only one bad performance out of 11 or 90.9 percent with a 3.48 ERA for 10 ⅓ frames. Apparently, he deals with high-leverage situations before the eighth inning if both Brad Hand and Knebel are available. Plus Girardi is hoping Alvarado can handle a similar role.

With Hand, the red pinstripes have a backup closer or a solid eighth-frame arm to count on. So far, he has a 2.45 ERA, one save and three holds for 7 ⅓ innings, but he is slightly below the 75-80 percent goal. And he has put 2021’s bad start behind him, plus his success means a $20 million, two-year contract.

Working the ninth frame, Knebel has a 3.00 ERA with five saves in six chances and has acceptable performances in 10 of 12 outings. But, now, doubting Thomases will remember only one of his 12 appearances. Moreover, some will be upset even if he has a save ratio of 90 percent.

Due to recent campaigns, some will emotionally view the bullpen, team, or management through a negative lens despite few healthy relievers: two in 2019 and one in 2020. Mentally, though, they may base their conclusion on one inning of one game out of a full 162 or roughly 1,458 frames: 0.0007% of the schedule.

With two comebacks in ‘19, the Phillies had beat the Mets with a five-run ninth on June 27, and they bested the Chicago Cubs on Aug. 16 with a six-run ninth: walk-off bombs via Jean Segura’s three-run blast and Bryce Harper’s grand slam respectively. And what did their fans feel after those defeats? Now, you know. 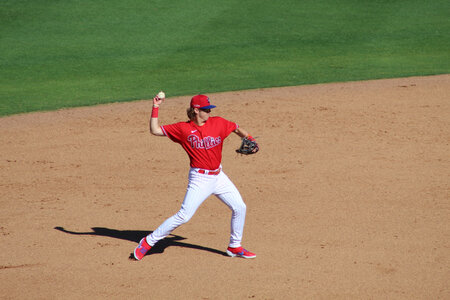 I will admit to being in the "Holding my breath" segment of fans but there seems to be more stability in the pen this time around. Good article Thanks