While Philadelphia Phillies and other baseball supporters dwell on offensive deficiencies, this designed situation could come from the lords of Major League Baseball. And it means the campaign may be broken into three pieces but two parts. Ergo, it bases a fifty-fifty split on the weather: cold ends and hot middle.

If you see just one month of standings and sluggers’ power stats, you’re missing the old-fashioned element in April and September influencing the entire 162. My best guess: Players cannot swing for the fences until June and must play small ball to win in April, May and September. Habit-forming, no?

In Arizona and Colorado, those organizations had installed humidors, and it slowed the homer barrage for those National League West clubs. Now, the MLB has humidors in every big league stadium. And –surprise!– bombs are down and many are noticing.

While veteran outfielders are going to the wall judging by the swing and the sound, stars have disbelieving faces when the ball just dies well shy of the fence. And, sometimes, the outfielder must move quickly forward to the grass for the catch. Yes, outfielders and hitters are misjudging flies in 2022 they didn’t during 2021.

Translation: Balls going to the warning track now will land in the stands in June, July and August. And teams wanting to win now must play good old-fashioned baseball, or they’ll lose. So, will they resort to only the long ball during the hot three months or score both ways into October?

Pitcher Chris Bassitt of the New York Mets has publicly complained about balls being different after 3-4 innings, while others have noticed raised seams. Moreover, the lack of baseballs without tackiness may be to blame for more hit batters because of the difficulty gripping them.

Eric Chavez, Mets hitting coach, stated many players have noticed marquee games, like Sunday Night Baseball, are different because home run balls are similar to ‘21. However, some don’t believe it could be possible. My take: Owners could use balls stored somewhere else.

The red pinstripes have five stars who can achieve 20 blasts or more, and that estimate is more realistic than each launching 40-50 apiece. But if you were among those with lofty expectations, the current tally disappoints you. And even realistic totals were recently down.

Intriguingly, the left-handed bats of Bryce Harper and Kyle Schwarber were at or near their ‘21 output until the Los Angeles series, yet right-side hitters’ numbers are down: Nick Castellanous, Rhys Hoskins and JT Realmuto. Is there a there there?

In Los Angeles, the warmer weather probably made a difference because the home runs had carry, and there were no surprised faces. Plus Fightins sluggers gave the faithful a preview of June, July and August. Moreover, they piled on runs because they didn’t wait for homers.

One statistical measurement reveals the upside-down nature of the standings and lower-than-expected numbers from power hitters. When, though, a player is hitting the ball hard, the manager and coaches don’t want him to change his approach. Basically, hard-hit percentages are a success indicator.

In the standings, the Arizona Diamondbacks are 18-17, and this is an unexpected development because they are NL ninth with 37.6 percent hard contact. Meanwhile, the Toronto Blue Jays are MLB second with a hard-hit rate of 44.6 percent and are also 18-17.

Pointed out on WFAN in New York City, the Metropolitans probably can’t maintain taking two of every three contests because of their soft contact. And even their 5.5 game advantage isn’t enough to silence a few doubts from their sports media. Yes, one did the research and didn’t like the answer.

The reason is small ball –aka Charlie Manuel’s little ball– equals victories when the humidified baseballs only carry to the warning track until warmer weather arrives and stays. But if your franchise’s roster revolves around power, they could roughly be a .500 team until June, and the Fightins are up to 17-18 due to this approach.

Yes, Phillies batters have come to a collective agreement to score any way possible and won’t wait for round-trippers to produce triumphs. And you’ve most likely noticed their base running, sacrifice flies, hitting to the opposite field, and taking free passes. Expect this to continue even past hittin’ season.

(Opposite is soft contact and all stats are through May 15)

In fourth place to the Los Angeles Dodgers’ 31.9 percent, the Phils hurlers have 36.4 percent for soft contact, and the Mets are second with 35.2 percent. Ergo, the Fightins pitching staff excels here also, and it made the series in Los Angeles more interesting. Plus it bodes well for ‘22. 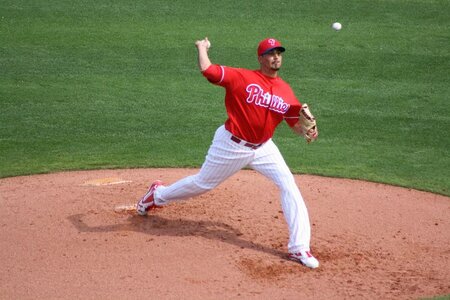 Ef could be back on Tuesday!