The Philadelphia Phillies faithful are negative and positive, but the negative ones have the loudest voices, highest expectations and longest lasting disappointments. Moreover, they embrace the worst-case scenario for players and the organization. Guaranteed unhappiness, no?

The Phillies five-man staff wasn’t the only one off to a “bad” start because only a few hurlers were past the spring-training phase of ‘22. Translation: Pitch-count limits covered only up to five frames under most circumstances. To illustrate, Zack Wheeler’s first three outings totaled 12 ⅔ innings but 38 ⅔ for his last six performances.

“People who write about spring training not being necessary have never tried to throw a baseball.” - Sandy Koufax

Some critics have doubted every hurler on the Fightins. Please, don’t confuse domination with consistency, which is four acceptable –bend, don’t break– outings out of every five: 80 percent but 75 percent for a full 162. And a six-frame average overall is what management expects.

Maybe, locals’ memories of the old days include the four aces’ career highlights. To them, bad games probably didn’t exist, and they are against pitch counts and innings limits. Well, pitching through pain –until a moundsman couldn’t lift his arm– was the longtime norm: the forgotten part.

Flamethrower Jim Wright was the Phillies top rotation prospect, but he never threw 150 pitches in an MLB start. With streaming tears, his arm felt on fire, and Wright chucked his last 1979 bullet because his bone snapped in half and protruded through his skin. Yeah, I remember hearing the bad news.

Fans here relished Halladay’s perfecto, but Josh Johnson of the then Florida Marlins was matching zeros in a 1-0 game. Later that year, manager Joe Girardi had brought him back after a long rain delay, and the right-hander was never the same again. Taking the heat now, Girardi refuses to ruin another pitcher’s career.

Johan Santana fired the first no-hitter in New York Mets history, but he needed 125 bullets. Yes, he had secured the no-no but was never the same afterwards. I always think of him when fans bemoan going to the bullpen due to a pitch count near the 115 mark for a milestone. If they want to, will some –now– think differently?

Losing an investment equals the contract plus hefty insurance premiums covering only 75 percent of the pact. And even though money is a factor, it’s secondary to going without a star:  learned usage. Basically, a stud or a potential ace isn’t an everyday commodity and gives his team a competitive edge.

MLB supporters anticipate the highest plateau a player has or hasn’t reached. And if your expectations are considerably higher than the franchise’s, they either set the bar low or you set it too high. So, how many of you believe baseball lifers are wrong?

Fans want to dominate an opponent, sweep their rivals, go coast-to-coast in first place, and easily win the World Series. Yes, they want a rookie to have immediate success and basically avoid growing pains and development. And they want a Double-A star promoted and expect the same numbers. A lot of wants, no?

After not facing major leaguers in an abbreviated spring camp due to offseason shoulder soreness and COVID-19 protocols, Wheeler’s first three appearances were uninspiring. But most starters needed three pitch-count outings. Yes, the ace had an 8.53 ERA for those three but has a 1.40 ERA for his next six.

Predicted to be a three or a two, Aaron Nola had a career year in 2018: 17-6 with a 2.37 ERA. According to many locals, however, he isn’t an ace but they want those stats annually. Yet, he is only his forecasted self: Not what some want. But though he had a 5.52 ERA for his first three starts, he has a 2.93 ERA for his next seven.

* Seven innings in his first pitch-count start: He fired 82 bullets.

Considered a mid-rotation arm, Zach Eflin had a 3.95 ERA for his first three starts, but he has a 4.91 ERA in his last five. Despite that ERA increase, the righty has coughed up 12 of 16 earned runs for both appearances against the Mets. Silver lining: He has a 1.89 ERA in the other three, and the next Metropolitans set will begin on Aug. 12.

Kyle Gibson’s first three opportunities led to a 3.57 ERA, but he has a 3.96 ERA in his last seven contests. However, he allowed eight runs (all earned) out of 16 total in one clunker against the Mets over 3 ⅔ innings: one out of his last seven games. But it will be the outing some will base their evaluation on.

If you had expected Ranger Suarez to repeat a 1.36 ERA, you underestimated his opponents figuring him out while earning their pay. Unfortunately, he has a 4.88 ERA for his six appearances since a 4.38 ERA in his first three contests. But he has coughed up eight of 17 earned runs in his last two chances: 7 ⅓ innings.

In ‘21, Suarez reached the summit but now he must learn to survive there. And there’s no guarantee he will achieve that. Though, he hasn’t disappointed the doubting Thomases yet, who don’t want Eflin and/or Gibson and will again question Nola.

For the Triple-A Lehigh Valley IronPigs, southpaw Bailey Falter is building arm strength between major league spot starts for the parent club. And he will handle that role, barring a better option for make-up doubleheaders after rainouts.

Overall, the Phillies have one of the better starting staffs in the majors according to a recent nationally published article. And local baseball men think the rotation is a strength, not a weakness. In this order, though, some believe Wheeler, Suarez, Nola and two acquisitions would fix the five-man staff. 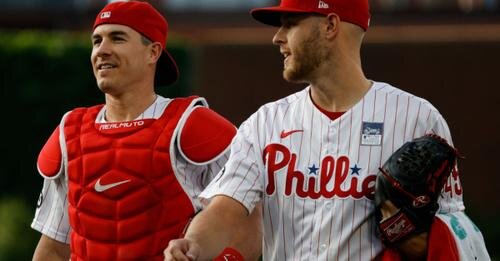