Should The Phillies Pay Zach Eflin? 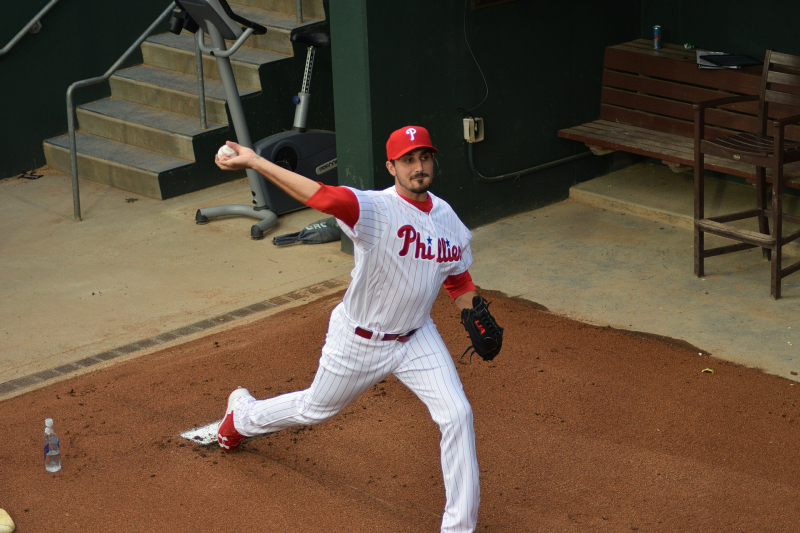 Sunday's game will be one to remember, even if Zach Eflin's 12 strikeout performance may not be the main reason. Eflin for the most part carried a pathetic offense for seven innings, allowing only two solo home runs against the best team in baseball. He allowed only four hits and had 12 whiffs on his curveball.

Eflin is another polarizing player to Phillies fans, but he's been molding himself into a solid starter over the last three seasons. Since 2020, Eflin has about an average ERA of 4.02 but a drastically lower FIP at 3.46. He is striking out about a batter per inning and has done a good job at limiting walks with only 1.7 walks per nine.

Even though his 2021 was cut short due to injuries, he's been a pretty reliable arm. In 35 starts over this span, he's pitched over 200 innings, which is pretty difficult to ask of most starters in today's game.

While we can mention this period, his jump this season feels significant given the circumstances. Eflin is on a contract year with the team and should be demanding a payday so taking this leap is important.

Diving deeper into the numbers, a smart team will want to pay Eflin some cash. While his strikeout rate hasn't jumped as it did in 2020, he has taken other significant leaps to produce high-quality pitching.

Eflin is doing a great job at limiting hard contact with an average exit velocity of 83.2 miles per hour, which is in the top one percent of pitchers. His hard-hit rate is only 27.5 percent, nearly 12 percent better than 2021, and he's only allowed five barrels on 109 batted balls.

Any analyst would tell you that any pitcher's ability to limit hard contact will lead to success but Eflin has been one of the best in the entire sport.

The one off-the-page leap has been the development of his curveball with a whiff percentage of 47.2 percent and a .148 opponent batting average making it the best secondary in his arsenal. Eflin trusts his curveball much more this year and is throwing it over 18 percent of the time, the most of any secondary pitch.

Back to the original question of this article, should the Phillies pay him? That answer might have to be yes.

The Phillies rotation could look a lot thinner in a couple of seasons with both Eflin and Kyle Gibson set to be free agents this year and Aaron Nola the following season.

While yes they do have three high potential prospects in the system in Andrew Painter, Mick Abel, and Griff McGarry, none of them will likely see the show in the next two seasons and it would be nearly a miracle if all of them hit their ceilings.

Eflin also is only 28 and might be hitting the prime of his career with this leap so it would be quite dangerous to let him walk.

There's a chance Eflin may not reach his full potential in Philadelphia, with Alec Bohm having a solid offensive season and Rhys Hoskins still around, it is not the best roster for a ground ball pitcher. There are two sides to negotiations and Eflin should probably want better defense around him.

Is it a slam dunk that they must bring back Eflin? I would wait until the end of the season to find that out but he is making a very strong case right now. The Phillies did agree to a 15 million dollar mutual option extension with him for next season but those usually don't exercise. If the Phillies want to keep Eflin around, it will require a real payday.