For some knowledgeable Philadelphia Phillies fans, one bad outing by any back-end reliever –especially the closer– spoils the entire bullpen. Unfortunately, even the best ninth-inning firemen have poor appearances or barely escape with a save. And the Phillies just scored on two of the top four MLB closers. Yes, even the best!

Starters throw 60 percent strikes and can miss with a centered fastball or hang an offspeed pitch. And if they can’t achieve that, they become relievers from middle frames to late-game innings. With rare exceptions, though, they are going to have rough patches to work through.

“Coaches and ownership are just like the fans on the street. They can always do it better, and they would always have done it differently when it doesn't work out.” – Billy Wagner

What is Billy Wagner saying? When a player doesn’t always perform up to his potential, some major league supporters are unhappy because they think he’s not doing his job. But averaging .300 is failing at a 70 percent rate; however, they expect a clutch hit at a much higher percentage: contradictory.

Even though Aroldis Chapman, Brett Myers and Jonathan Papelbon were rotation worthy, control mostly determines a hurler’s role from Single-A to the majors. Ergo, Chapman and Myers wanted the ninth frame over starting, but Papelbon as a rookie filled the pen’s need due to a set five-man staff.

When locals view players with assumptions, they vilify the ones they don’t like and give a pass to those they do. In fact, they are quick to turn on relievers who have poor outings too close together. And I remember a fan who was down on a reliever due to two recent opportunities after a lights-out stretch but still at 90 percent.

To clarify, a good outing can be two singles sandwiched around a double play because it wasn’t a nail-biter. But if you're feeling anxious about a fireman being one pitch away from defeat with the opponent rallying, that escaped jam is a bend-don’t-break appearance. Therefore, getting the job done is acceptable.

On June 9, southpaw Ryan Sherriff received his Single-A rehab assignment, and the Fightins expect him by month’s end. Also, Sam Coonrod’s rehab will be soon, and they anticipate his return by June’s end. In early July, JoJo Romero will likely complete his as-yet-determined rehab.

Table bases performances with inherited runners considered and was a rolling tally.

Presently, lefty Romero should rejoin the Phils before the All-Star break. And portsiders will compete for much needed relief. So, the red pinstripes will need at least one –maybe two– after Brad Hand from Jose Alvarado, Sherriff and Romero.

For now, the Fightins have nine bullpen pieces, but June 19 is the last day before the 13-pitcher rule again takes effect. Therefore, one of the two remaining relievers above or Norwood's replacement won’t be on the squad. (James Norwood was out of options.)

Basically, the Phillies faithful want a dominant closer, but those expectations call for a Josh Hader. And when he becomes a free agent after the 2023 campaign, he’ll probably be the first ninth-inning arm to receive $20 million a year.

The more interesting question is why do you want the top bullpen piece? Realistically, you want every save converted with ease, and you’ll consider one or two outings: acceptable or bad. Translation: You want Mariano Rivera or 2008 Brad Lidge to be what? Comfortable?

* After returning due to building up arm strength

Because relievers have enough command to close –but not start– they mostly have only one frame to complete, albeit a high-leverage inning. Due to not having pinpoint control, it is easier to hang a breaking ball or fire a center-cut fastball. And that’s if their pitches are working: trouble otherwise with no warm-up tip-off.

To illustrate, righty Raisel Iglesias, a top-four closer, has two blown saves out of 14 opportunities; and the second one was on June 5. He came in with the bases loaded and one out in the eighth frame, but he hung a centered changeup to Bryce Harper for a game-tying grand slam into the upper deck.

In the next contest on June 7, lefty Hader, the top fireman, suffered his first blown save in 19 chances. First, Alec Bohm tied the game in the ninth inning by blasting a high inside fastball (96.4 mph), and Matt Vierling two batters later launched his bomb on a center-cut, knee-high slider for the lead.

In many games, there are two save situations. Yes, the last frame is one but it’s not always the more difficult inning. Seranthony Dominguez receives the call if the opposition poses a serious challenge in the seventh or eighth. Translation: He occasionally must extinguish the threat another reliever left.

Corey Knebel has a mid-90’s heater and a 12-6 curveball to keep hitters off-balance. Basically, he gives the Phils a reliable arm to preserve a victory. Like most relievers, though, he must gut out a frame with just his fastball if he doesn’t have his hammer to neutralize the opposition. And this isn’t unusual for a solid fireman.

To sum up, reinforcements are coming, and the bullpen isn’t a liability because a guy has a bad outing. Therefore, locals don’t have a unicorn, but what do they have for the final outs? An unappreciated stallion! 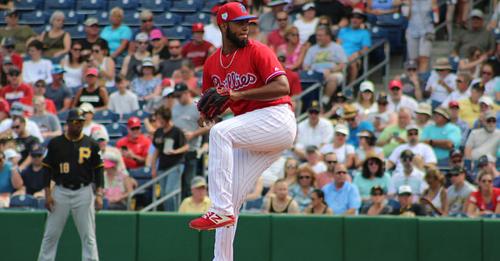