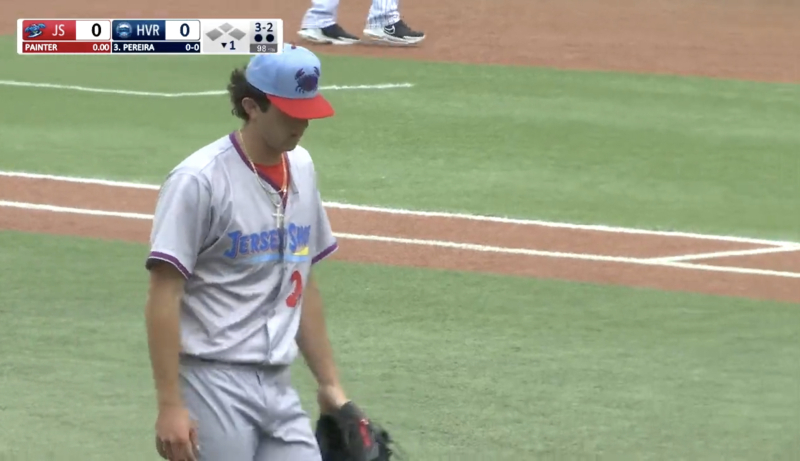 Sunday marked the beginning of the next journey for the No. 1. prospect in the Phillies farm system. Andrew Painter toed the rubber for the first time with High-A Jersey Shore. The 19-year old, second year pro was recently promoted from Low-A Clearwater after a tremendous few months on the Gulf Coast.

For Painter, his first start with Jersey Shore showed glimpses of his dominance but also provided his first struggles as a professional.

Painter’s first inning with the BlueClaws started like many of his innings with the Threshers, dominating opposing hitters. He sat down the Hudson Valley Renegades (NYY) in order and he did it via the K.

The second inning was as economical as the first despite a pair of Hudson Valley singles. Painter forced three flyouts despite the singles and was more efficient with his pitch count.  It was the third inning that doomed Painter.

Painter allowed three hits, including a homerun, three walks, and three runs on 36-pitches in the third frame.  He was uncharacteristically wild and struggled with the Hudson Valley batters jumping on his first pitch.  Painter exited the game after the inning and earned a no decision in Jersey Shore’s 10-7 loss to Hudson Valley.

Despite the setback, if you want to call it that, Painter showed exactly why he was rated as MLB's Top Prospect in the Phillies farm system.  The onus will now fall on Painter and ‘Claws pitching coach Brad Bergesen to improve upon his first outing at a higher level.

Painter will likely be back on the mound on Thursday or Friday during Jersey Shore’s six-and-half game homestand against the Aberdeen IronBirds (BAL).