Some Philadelphia Phillies faithful believe the Fightins have no shot against their two divisional foes, and rival fans agree. Ergo, their franchise will succeed, while the red pinstripes will fail as usual. In fact, their supporters think there are only two clubs able to secure the National League East pennant.

While the Phillies have a decent rotation and a potent offense even with a struggling power hitter, their relief corps has some solid pieces, and their defense is capable of making routine plays. Plus the front office has roughly $15 million available and can still be under the second tax threshold. A gambler’s chance, no?

“Think of success as a game of chance in which you have control over the odds. As you begin to master concepts in personal achievement, you are increasing your odds of achieving success.” – Robert Foster Bennett

In their minds, New York Mets supporters believe their team has a lock on the NL East, and they expect a coast-to-coast ride for ‘22. Unbelievably, most even dismiss the Atlanta Braves as a competitor, plus the red pinstripes aren’t worth mentioning. And since the below clip aired, Atlanta and Philly are both 15-3.

Braves fans think New Yorkers are slighting the defending 2021 World Champions, and they want to knock them down a few pegs. That stated, these Georgians view the Phils as Mets fans see them. Plus they can’t believe the Fightins won nine straight and can match their 15-3 June.

Basically, Atlanta locals consider the Phillies as an annoyance. And they think the red pinstripes only have sluggers and nothing else with a porous defense plus a hapless bullpen. Translation: We don’t belong on the same field.

Some devoted Phils faithful magnify every defensive miscue or poor relief outing as proof of ineptitude, and they believe the Fightins are going nowhere without correcting these deficiencies. However, improbable expectations shroud realistic positives: Pointing out only negatives and grudgingly mentioning pluses.

The offense is averaging roughly five runs per game and producing the expected firepower. Yes, stars go into slumps due to struggles and flagging confidence: Most are streaky because success precedes self-assuredness. And the same is true for the club. Facts: Winning and losing streaks go with periods of .500 ball.

And even though Nick Castellanos is struggling, he’ll go on a tear to give the Phillies a chance at victory and the opportunity to catch the Braves and Mets. Realistically, the franchise is June’s 15-3 (winning), May’s 10-18 (losing) and April’s 11-11 (.500 ball). But if you expect the ups and downs, you'll keep your sanity.

After their first three starts on pitch counts, Zack Wheeler is 6-0 with a 1.41 ERA, while Aaron Nola is 3-2 with a 2.64 ERA. Basically, the entire rotation’s first three turns were spring camp’s end due to the lockout and abbreviated April schedule. Expectation: They are a solid one-two punch, but they could each have a monthly clunker.

The red pinstripes have two mid-rotation arms: Zach Eflin’s 3.98 ERA and 5.9-innings average before a balky-knee exit and Kyle Gibson’s 4.04 ERA plus 5.3 frames per outing. In October, teams have four starters, and few clubs have solid hurlers after their top two: Four aces was a rare occurrence. This is a strength!

While Ranger Suarez has regressed from ‘21, he is averaging 5.3 innings a start with a 4.43 ERA: a four-slot arm. And Bailey Falter has only faced the Washington Nationals since building up his arm strength. So, he’s a 27th man and a spot starter for doubleheaders due to rainouts and scheduling.

If the PRP injection is successful, Bryce Harper will be fresh for the second half and improve the outfield defense. Also, the DH spot will be a brief rest day for many regulars while keeping their bat in the lineup. And since all players boot the ball occasionally, the defense must make routine plays with normal –not magnified– errors.

Realistically, the pen isn’t lights-out, but it’s not the worst either. Yet some have written off Corey Knebel before frowning on the closer by committee. However, Knebel isn’t giving up, and he recently had an appearance with the fastball and curveball he’s betting on to get a multi-year contract: I wouldn't wager against him.

Seranthony Dominguez earned his first save since Tommy John surgery, and closing is his coveted prize. Eventually, he and Knebel will give the Phils a solid one-two punch to preserve triumphs. And that contrasts reputation-wise the bullpen divisional rivals are expecting.

Moreover, Connor Brogdon and Brad Hand can handle the seventh inning and fill in for the eighth frame as well. Translation: Healthy starters go 6-7 innings, and the relief corps has a decent back end. So, their average needs are five runs a game, six frames per starter, basic fielding and four back-end relievers.

To only credit a new manager for the turnaround isn’t realistic because of other factors. For instance, humidors kept homers down until June. Moreover, the front office sent a do-it-now message to not waste a softer schedule, while their foes sleep on them. And what will it take for the execs to plug holes in July? Winning! 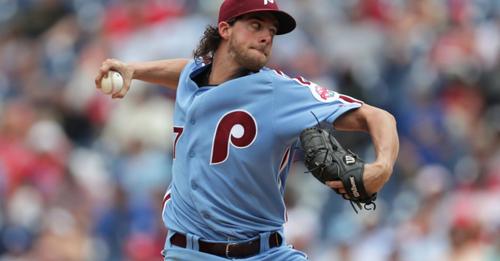