Down on the Farm: Checking in on the Philadelphia Phillies Top Prospects 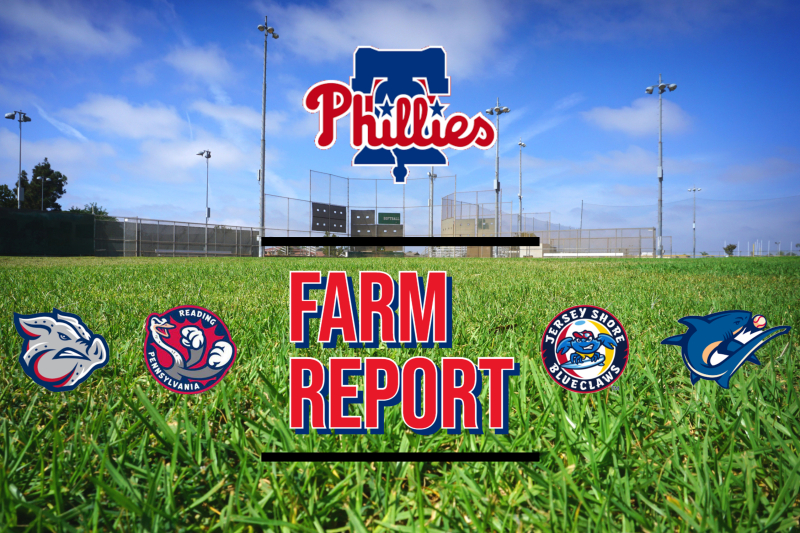 This week “Down on the Farm” I take a look at how the top ten prospects in the Phillies system are trending.  For reference, I used MLB’s Top 30 Phillies prospect list and MLB’s Top 100 in baseball list, respectively.

The Phillies farm system is ranked 19th overall by MLB and 23rd overall by Baseball America.

It’s easy to see why the farm system, and by extension the Phillies, are so mediocre.  There are plenty of good-to-great things going on in the farm system but there’s also a lot of “WTF” moments and players.

Let's get it started with the number one prospect in the Phillies system.

Andrew Painter | RHP | High-A Jersey Shore- The 19-year old was recently promoted from Low-A Clearwater to High-A Jersey Shore.  Painter made his first start last week against Hudson Valley and showed flashes as to why he’s the number one prospect in the system.

Mick Abel | RHP | High-A Jersey Shore- The 15th overall pick in the 2020 June MLB Amateur Draft, Abel has opened eyes this season in Lakewood.  The 20-year old is 4-4 with a 3.56 ERA, 57 Ks, and a 1.356 WHIP.  The ERA is deceiving, Abel had one bad outing against Bowling Green that inflated his ERA.  He has been a strikeout machine for the BlueClaws.

Mick Abel struck out 6 over 6 strong innings tonight, allowing just five hits, 1 ER with 2 BB for Jersey Shore … Got punchouts on fastballs at 98, 96 and 97, and really used the breaking ball down and away to righties well pic.twitter.com/KDDtaizWzQ

Logan O’Hoppe with an absolute seed to left field that sneaks over the wall for his 14th home run of the season to give Reading a 2-0 lead pic.twitter.com/pg2vtWfWKW

Hans Crouse | RHP | Triple-A Lehigh Valley- Crouse has only made three appearances this season for the IronPigs, all of them in April.  The 23-year old, who was acquired from Texas in the Spencer Howard trade, has given up nine earned runs over 7.1 innings.  He was placed on the IL with an injury and then the COVID-19 reserve list.  There is no timetable for his return.

Luis Garcia | SS | High-A Jersey Shore– Garcia, the prized signing of the 2017 international signing period, hasn’t played since April 20 due to an injury. Before being placed on the IL, Garcia only accumulated 34-at bats with a .147 AVG, 4 RBIs, and 13 Ks for Jersey Shore.

Francisco Morales | RHP | Triple-A Lehigh Valley- Morales made his Major League debut on May 9 when he pitched two scoreless innings in the Phillies 9-0 win over Seattle.  He struck out three and walked one.  Morales made one more appearance for the Phillies, he earned his first MLB save on May 13 in the Phillies 12-10 win over Los Angeles.  He walked three and allowed an unearned run in that appearance and was optioned back to Triple-A Lehigh Valley.  He has been inconsistent since returning to the IronPigs posting a 22.50 ERA with 3 K, 6 BB, 1 HBP, and a 5.00 WHIP in three appearances out of the ‘Pigs bullpen.

Erik Miller | LHP | Double-A Reading- Miller, the Phils’ 4th round pick in the 2019 MLB June Amateur Draft out of Stanford University, has been impressive in 2022 for the Reading Fightin’ Phils but recently found himself on MiLB’s Developmental List.  Before finding himself on the DL, Miller was 1-0 with a 1.52 ERA, 30 Ks, 12 BBs, and a 1.14 WHIP in 13 appearances (seven starts) for the Fightin’s.

Keep an Eye On

Mickey Moniak | OF | Triple-A Lehigh Valley- It’s absurd that Mickey Moniak is on the “Keep an Eye On” list but here we are! Moniak was optioned back to Triple-A Lehigh Valley on June 14. In his first game back with the ‘Pigs, Moniak was 2-for-4 with a homer, a run scored, and an RBI.  Perhaps some consistent playing time at the Major League Minor League level will allow him to get back into a groove and eventually rejoin the Phillies.

Jordan Viars | OF/IF | FCL- Rookie– Viars was the Phils’ 3rd round pick (84th overall) in the 2021 MLB June Amateur Draft out of Reedy High School in Frisco, Texas. Baseball America raved about Viars’s power as a high school player and projected him as a 30-plus MLB home run hitter.  His season is just getting started down in Florida, Viars is hitting .222 with 1 2B, 5 RBIs, 6 Ks, 4 BBs, and a .333 OBP.  The FCL-Phillies are seven games into their season.