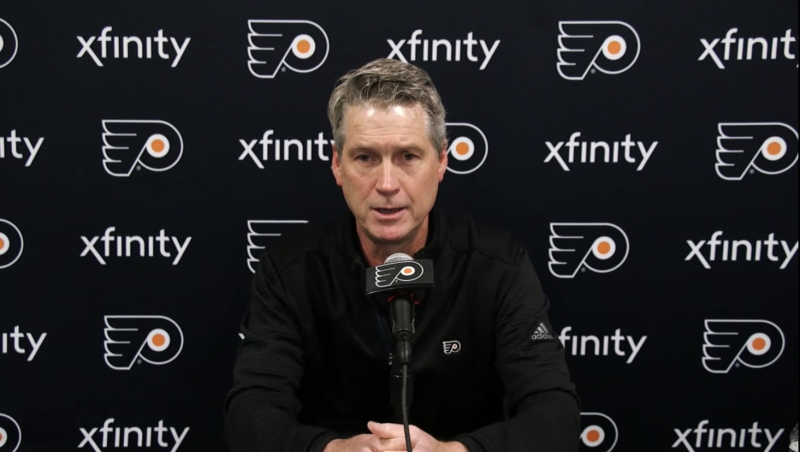 Before we can dive into this, let’s start with what was said at Tortorella’s introductory press conference. A head coaching candidate is only going to have so much involvement in the process. While the Flyers may have operated within their search by having coaches pitch them on why they should be the next head coach, there comes a point when the coaching candidates are just standing by and waiting for the next steps.

So, from Tortorella’s perspective, this is understandable.

“A lot of questions in different areas, about the person, about the game, about how to approach the game,” Tortorella said of the process. “I just felt comfortable right from the get-go with my conversation with [GM] Chuck [Fletcher.] I thought it was easy flowing, he was to the point. I just thought, I hope Chuck feels the same way, I felt so comfortable talking with him. It was like two guys talking hockey.”

There have been numerous and conflicting reports about how the process was in reaching the decision of Tortorella’s hiring. These reports, most notably from Crossing Broad’s Anthony SanFilippo in this article and further detailed on the latest episode of Crossing Broad’s Snow The Goalie Podcast, include that Fletcher specifically didn’t have Tortorella at the top of his coaching candidate list and that the use of an outside agency was an idea that Fletcher wasn’t thrilled about.

It was reported by numerous outlets, both locally and nationally, that the Flyers made an offer to Barry Trotz, one that would have made him the highest paid coach in the NHL, and he turned it down. Obviously, the ball was always in Trotz’s court there, so if he decided against the offer, the natural pivot was to a coach of Tortorella’s stature, especially with the Vegas Golden Knights also jumping in and hiring Bruce Cassidy. It was always going to be a high-profile head coach for the Flyers, and that makes Tortorella a natural fit.

Fletcher did confirm at the press conference that there was the use of an outside agency in this coaching search called The Coaches Agency. This is still an uncommon practice, but has been used in the past by multiple franchises across the major sports. On The Coaches Agency website, the Vancouver Canucks and Anaheim Ducks are listed as clients and, locally, the Philadelphia Eagles have used a different agency in their recent coaching search.

With the help of the agency, Fletcher detailed how the process took place from his perspective on Friday.

“It's not a common practice yet, but I think sports will probably start to mirror corporate America a little bit more by using these types of search firms in the search. They allowed us to set up a process,” Fletcher said. “I've hired coaches before, but I can't say ever had a great process. I interviewed some great candidates. We really wanted to go through it methodically. Create an ideal candidate profile for what we're looking for.

“They came to us with a list of well over 50 names of candidates that we placed into different buckets. We use that candidate profile to filter through the initial list of names. Got down to about 15 or so names. We did some research. We had some meetings. We filter that down to about eight names. They were very involved in that initial vetting process. They had some great ideas in terms of the interview template, how to run a proper interview, the types of questions to ask. We came up with a plan where we basically asked the coaches to pitch us.

“All eight coaches we interviewed are great coaches. All of them could have coached the Philadelphia Flyers. We knew they were good. It was less about ‘tell us about your life or your history.’ It's more about ‘why you, why you for the Flyers, and how would you run our team?’ From there, you could get into questions. They were very involved in that process, but once we got down to eight candidates, as I mentioned before, we took over the process in terms of the interviewing. We met as a group, Danny Briere, Brent Flahr, Dean Lombardi and me. After interviews, we debriefed. We talked about strengths and weaknesses of the candidates. Who did we want to go forward with? That process was great. We had four second interviews. The last of the second interviews was this past Sunday. By Monday, I made the decision that John was the guy.”

There are two names that were not mentioned there by Fletcher. A source confirmed that former Flyers GMs and current senior advisors Bobby Clarke and Paul Holmgren were utilized in the process for input and feedback on candidates. Both Flyers Governor Dave Scott and Fletcher value the opinion of Clarke and Holmgren, hence their involvement.

This can create a situation of too many voices. Fletcher, Flahr, Briere, and Lombardi may have their thoughts, but ultimately Scott signs the “blank check” and Clarke and Holmgren are valued as traditional hockey minds. It creates a situation where it’s impossible to have one clear-cut top candidate that everyone agrees with.

And there’s the problem in a nutshell. Management is intended to be leadership. Fletcher is both the general manager and President of Hockey Operations for the Flyers. A person in those roles can certainly lean on the advice of senior advisors like Clarke, Holmgren, and Lombardi and assistant GMs like Flahr and Briere to bounce around ideas and have discussions, but the ultimate final decision should be coming from the general manager who both orchestrates and leads the search and has the trust of everyone involved in the process.

Fletcher may have said that Tortorella was his first choice. He may have said this was his decision. But where there’s smoke, there’s fire, and the decision to use an outside agency from a business perspective – note the use of the word “corporate” by Fletcher – makes it feel like this was far from a harmonious process.

It all creates a lack of trust in the management group that is ultimately tasked with the bulk of the work. The Flyers had arguably their worst season in franchise history a year ago – not by final point total, but certainly by the lifeless nature on the ice and the pure apathy of the fanbase off it.

Hiring a coach like Tortorella definitely creates, as Fletcher alluded to, a selling point for the Flyers. It puts a face to the franchise that is a reminder of the passion that the fans feel and the standard that was for many years the defining part of the Flyers tradition, being a hard place to play and a tough team to play against.

But it is ultimately the players that do that. Tortorella can coach up any group and attempt to turn it into what becomes the standard in the NHL. Every player can play to the best of his ability and have it not be enough. It ultimately falls on the management to make the right decisions, to be smart with the moves that are made, to get legitimate talent via every avenue. That starts with Fletcher, whose seat couldn’t be any hotter now with Tortorella behind the bench. If things don’t start turning around for the Flyers in a hurry in the 2022-23 season, that may mark the end of Fletcher’s tenure in a hurry.

But with or without Fletcher, there are too many areas that appear to be a disconnect. The amount of voices, whether from an outside agency, within the organization, or from the business management side of operations, should all eventually circle back to the general manager that is making the final call on everything on the hockey side, because there’s trust in the general manager to make the right decisions based on the candidates interviewed or the way the game is trending when it comes to building a team.

It’s one thing for the fans to not have much trust that Fletcher can hire the right coach or repair this team based on track record and the product they have watched on the ice. But if it’s happening within the rest of the management group or the business operations side, then why has Fletcher even survived to this point?

That wasn’t what the standard used to be, an organization that always prioritized winning, spared no expense to do it, and always seemed like one big happy family. Now, it’s just one big dysfunctional mess, and no coach or player is going to repair that overnight.