The Philadelphia Phillies faithful make snap judgements about their stars, management and expectations for the immediate future, plus they react after each game. Mostly negative! Despite contradictory evidence, though, many conclude the team is how they are playing at any given time: good or bad.

Phillies fans –like their counterparts rooting for other major league franchises– reach immediate conclusions as if there’s only one possible answer. Realistically, there are many factors involved because baseball, sports and life are complex. But, unfortunately, many conclusions are emotional, not mental.

“For every complex problem there is an answer that is clear, simple, and wrong.” – H. L. Mencken

Basically, it takes six months to play a full 162, and it’s nearly impossible to win two of every three contests. Granted, some clubs in baseball history have, but a titanic majority hasn’t. No, seasons contain ups and downs: periods of winning, .500 ball and losing. And the Fightins have done all three this summer.

In April, the Phils were a .500 team with an 11-11 mark. And this record indicates their rotation, bullpen and offense had victories because these three components complemented each other. Though, at least, one part failed and led to defeats in half of them.

Losing means one element or more failed: 65 percent for the red pinstripes in May. Thus, they had only 10 triumphs out of 28 games. But, unfortunately, some locals gave up on them and probably believe the real ‘22 Phillies played in May.

Even though the Fightins are 18-6 in June, doubting Thomases will probably find any reason to discount their current success: easier competition, luck, and playing a good club having a rough patch. However, the opposite –a tougher schedule– with bad breaks is irrelevant to them.

For players, being hot is due to confidence gained from success, but this is a double-edged sword because failing causes doubts. And negative thinking creates a subliminal overreaction resulting in a slump. Basically, to compete at this level requires precise mechanics in a relaxed state.

According to Larry Bowa, position players and hurlers have slumps, but it doesn’t stop the fanbase from quickly doubting someone who’s struggling. So, Rhys Hoskins was the get-value-now trade after 2019’s second half. Plus Alec Bohm and Didi Gregorius were on 2022’s replace-him list during the offseason.

Presently, some locals demand the release of Corey Knebel after his struggles. And they want more than just another closer. In reality, they want the Phillies to eat $10 million and replace him with rookie Mark Appel. Ergo, the conflict is between making a move and succeeding (a must).

The knee-jerk reaction to designate a player for assignment after a couple bad outings is strictly an emotional one. Besides, the replacement will also have flaws, and you’re starting over again. But though you want a dominant fireman, they probably aren’t externally available.

Another misconception is a winning organization with stars on the injured list will be even more dominant when they return. Realistically, the replacements are taking advantage of the opportunity to produce during this limited time. And the reason is to make themselves valuable for other franchises.

Hypothetically, Max Scherzer’s return to the New York Mets doesn’t mean they’ll play .700 ball instead of their .635 currently. And the reason is replacements played above their heads. Moreover, additional victories don’t magically happen, and they haven’t faced adversity yet.

Who, Where and When Equals Why:

While many MLB supporters unquestionably believe a strong team should always defeat a weaker one, this is a flawed expectation. For instance, this thinking assumes a weak team can only win a series against another weak franchise. Ergo, they never have a winning streak, not even with good fortune. Never.

Many organizations below .500 have a better home record. Yet, fans expect stronger teams to, at least, win the set if they can’t sweep this inferior opponent, aka playing down to the competition. Players, however, are more comfortable –an important factor– not living out of a suitcase.

When the games occur is the biggest clue to the outcome of any set. Therefore, a hot weak club can take a series against a cold stronger opponent, and this is especially true in the also-ran's home. Translation: Outcomes are more predictable if all factors receive consideration.

On June 1, the Phillies ended a five-game losing streak by besting the San Francisco Giants. And, then, they faced the Los Angeles Angels on an eight-game skid: a sweep at the Bank. Next, the Milwaukee Brewers had lost five of their previous six before adding three more defeats at home to their tally.

To further illustrate, southpaw Josh Hader of the Brew Crew and righty Raisel Iglesias of the Halos have a combined three blown saves out of 38 opportunities. Two of which occurred in consecutive games on June 5 and June 7 against the red pinstripes.

To sum up, the Phils are 1.5 games out for the third wild card with 88 contests left. Ergo, it’s possible even without Bryce Harper. And the Braves series may be one without Harper and Ronald Acuna Jr. Moreover, what will the Fightins stars earn by continuing to play winning ball? Stretch-drive acquisitions. 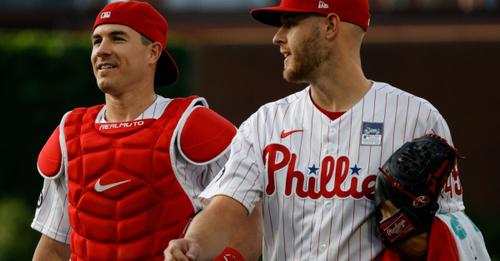