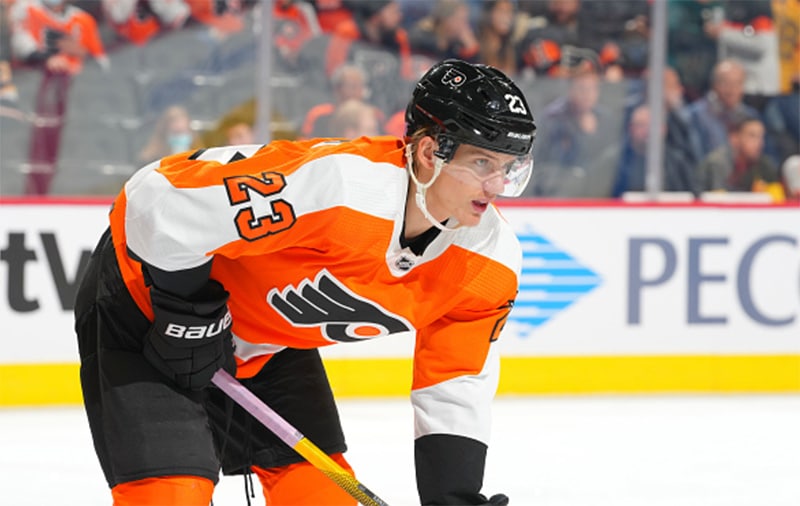 Free agency opens on Wednesday at noon and the Flyers plan to continue an aggressive approach to the offseason. That has been no secret. From hiring John Tortorella as the new head coach to acquiring and extending Tony DeAngelo over the weekend, the Flyers certainly aren’t in a rebuild.

So what’s next? Many believe the end goal of free agency is to land a big name like Johnny Gaudreau. But to do that, the Flyers need to free up more cap space. In doing so, one move they are making will save them some money, but come at a cost.

The Flyers will buy out forward Oskar Lindblom, who was set to enter the final year of a three-year deal in the 2022-23 season, placing him on unconditional waivers on Tuesday afternoon. His current cap hit was $3 million and the buyout saves the Flyers $3.33 million toward the cap.

“This was a very difficult decision to make and one that we spent a lot of time examining,” Flyers GM Chuck Fletcher said in a statement. “No one can question the desire, will and strength to overcome all that Oskar has been through off the ice in order to return to the game he loves. Further, Oskar’s commitment to his teammates and impact in our room has been immeasurable. He is truly an inspiration to us all and he will always remain a special part of the Philadelphia Flyers family. We wish him all the best as he continues his NHL career.”

The Flyers also announced that Flyers Charities will be donating $100,000 in Lindblom’s name to a local organization supporting families impacted by cancer.

Then came Lindblom’s diagnosis with Ewing’s sarcoma in December of 2019. He admirably beat the disease, remaining cancer-free today, and returned in the 2020 Stanley Cup Playoffs, but his production and playing time took a significant hit as he worked to become the player he was prior to the diagnosis.

Lindblom will almost certainly land on his feet and get a short-term deal elsewhere in the NHL. He’s proven that he can still play years after the initial diagnosis, but given the approach the Flyers are using this offseason, he becomes a cap casualty. It certainly comes as a cost to the Flyers fanbase, who rallied around Lindblom following the diagnosis and loved his personality. With the buyout, a fan favorite is leaving, no question about it.

In addition to Lindblom, there is discussion that the Flyers want to move James van Riemsdyk’s contract. Unlike Lindblom, buying out van Riemsdyk wouldn’t result in much of a savings this season for the Flyers and carry a cap penalty of $1.33M next season. There is a market for a player like van Riemsdyk, but the price tag could require the Flyers to add a sweetener to the deal to make it happen.

Buckle up for what is going to be an eventful 24 hours leading up to free agency and beyond.