Even though it may be early for the Philadelphia Phillies faithful to consider the percentages at the All-Star break, it’s similar to Opening Day predictions before pitch one. In fact, this is prior to the trading deadline of Aug. 2 (July 31 is a Sunday), and organizations will still have Aug. 1 to wheel and deal.

Even if the Phillies have a 50 percent chance for postseason glory after Aug.2, it won’t be due to acquiring a front-of-the-rotation arm or a stud closer because they have those stars. Remember, even four aces lost to the hot club in 2011 after a coast-to-coast campaign with a franchise record 102 triumphs. That’s why!

“Pessimists calculate the odds. Optimists believe they can overcome them.” – Ted Koppel

Realistically, Dave Dombrowski, PBO (president of baseball operations), has two requirements for stretch-drive expenditures. The stars must play around .600 ball and be heading in the right direction, plus the glaring holes will be the ones he addresses with $14-15 million. Now, they have difference-makers.

According to the second-half schedule, the Fightins have 12 contests against the Atlanta Braves (seven home) and nine (four home) versus the New York Mets. Basically, these games are an opportunity to gain ground, but only three home contests against the Braves will precede the Aug. 2 deadline.

The first opponent immediately after the Aug. 2 swaps will be the Braves at the Bank, and hopefully the red pinstripes will be near full strength including deadline pickups. Yes, this will be the first test of the stretch drive for a wild card or a divisional pennant for both organizations. May the best team south of New York win!

The IL (injured list) reveals significant personnel losses for Philly, Atlanta and New York (NL). For the Metropolitans, Jacob deGrom will roughly miss four months, Max Scherzer was out for 6-7 weeks, Tylor Megill will be on the IL for 3-4 months total, and catcher James McCann will miss 12 weeks overall.

If they activate setup man Trevor May by early August, he’ll be another arm out for half a year. Ergo, the Bravos have picked up eight games on the Mets, and the Phillies have gained four. But after the Mets had jumped off to a 34-17 mark, they went 13-13 but without a rough patch so far. Are they equal to the 2011 squad? No!

Atlanta’s long-term absences are starter Mike Soroka, who could return in early September, and reliever Kirby Yates, who could play two months in ‘22. For now, second baseman Ozzie Albies will play only half a season but possibly a bit more. Basically, they assembled their roster with Soroka and Yates as unplanned bonuses.

On the short-term side, Kenley Jansen and Ronald Acuna Jr. have missed roughly 2-3 weeks, but Acuna’s production is below expectations. Perhaps, his fans are anticipating the 2019 superstar: .280, 41 home runs and 101 RBIs. But doubling his current stats would equal .265, 16 homers and 44 RBIs.

Unlike the Fightins, the Braves and Metropolitans won’t be playing in Toronto this summer. Recently, the Phils suffered two of four defeats because of two bullpen games, JT Realmuto’s unvaccinated status and Alec Bohm’s injury: half a lineup. Of course, this pales next to the 10 Kansas City Royals restricted players.

The red pinstripes had Bryce Harper defensively for roughly eight games and 56 contests as a DH, and he’ll be out about two months total. Moreover, Jean Segura will miss half a season. Both, though, will return during the stretch-drive’s final two months. But if the Phillies are in the playoffs, it won’t be due to rivals’ injuries.

In the first half, the rotation was without Ranger Suarez for his 15-day stint and Zach Eflin, whose balky knee is questionable: a replacement is necessary. But keep in mind, playoff teams use a four-man staff, so a fifth starter won’t require top prospects. In the minors, though, no standout has the requisite Double-A success.

Although players won’t be pacing themselves from now through game 162, there will be ups-and-downs. To illustrate, the St. Louis Cardinals are also fighting for the third wild card, so splitting a four-game series in their park wasn’t a sign of inconsistency for either club. In fact, not expecting it is ignoring reality (or to complain).

There will be a back-and-forth due to the competition and the expectation to sweep also-rans. Yes, the scoreboard will determine who’s gaining on you, or whom you are catching. And the faithful will be living and dying with each pitch on this emotional roller-coaster ride: Hold on!

Competing for the final wild-card berth with the Cardinals and the San Francisco Giants, the Fightins have roughly a 40 percent chance. And the Milwaukee Brewers could fall behind St. Louis, but one of those two franchises could be hosting the three-game wild-card set, barring injuries, luck, and a scorching hot streak.

For some reason, baseball fans pigeonhole their team and its stars, like a television series where the main character always survives. And locals want to know they’re a postseason club worth their time, a .500 team or an also-ran they can ignore. Hence, they keep pulling many back in.

The exec must pick up a difference-maker for the stretch drive. Therefore, he waits because his biggest need may be around the corner. For instance, Eflin had a similar difficulty last August, when it was too late to rectify. But this time, it’s correctable with an acquisition.

Despite those four circumstantial defeats, the Phillies are vying for the playoffs. True, naysayers can point to previous Septembers ending in disappointment and consider every loss as proof. But if they aren’t falling behind in the wild-card race or emptying their tank to stay relevant, where are they heading? The right direction. 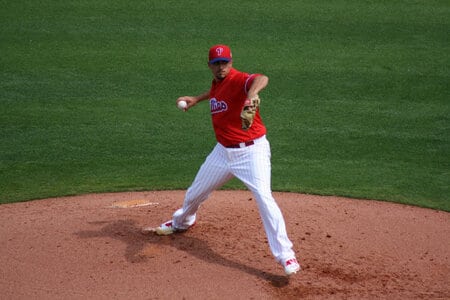