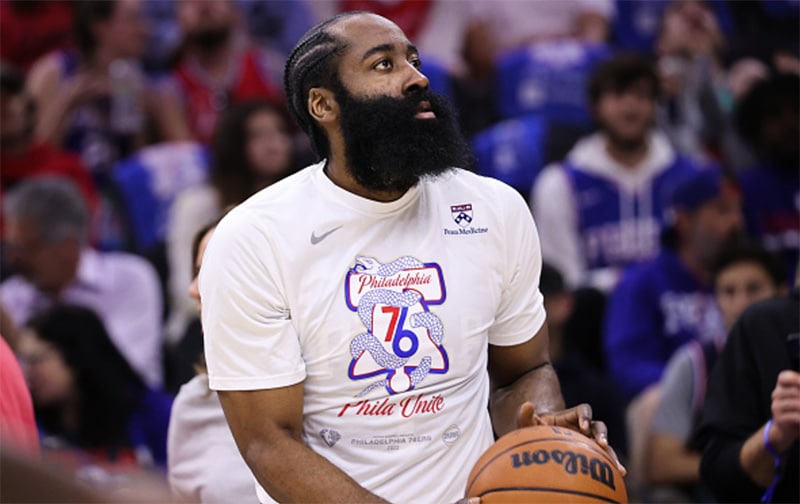 When James Harden took a pay cut and opted out of his $47.4 million player option for the 2022-23 season, it gave the Philadelphia 76ers the ability to improve the roster through free agency. The team then used free agency to add two of Harden’s old teammates, P.J. Tucker and Danuel House Jr., using the full non-taxpayer’s mid-level exception and the bi-annual exception. The only questions then remaining surrounded what Harden’s extension with the team would look like.

Shams Charania of The Athletic on Friday afternoon reported Harden is taking a $15 million pay cut for next season and signing a two-year contract with the Sixers that comes with a player option for the second season.

Sources: James Harden is taking a $15 million paycut for next season that allowed Philadelphia to elevate roster — with sole focus on a championship run in 2023. Harden opted out of his $47M player option and now plans to sign a new two-year deal with a player option in Year 2.

While the contract extension is not official, a $15 million pay cut would put Harden at around $32 million for next season. This reported extension would also leave the team with roughly $4 million in room under the tax apron, allowing the Sixers a little bit more flexibility for smaller moves either this offseason or during next season.

A 1+1 contract structure for the Harden extension gives both himself and the team flexibility moving forward. The first step, regardless of all the other potential possibilities, is for Harden to suit up in Philadelphia next season. The two sides then have the option to re-negotiate a new contract after the 2022-23 season, Harden can opt out altogether (which seems unlikely), or Harden can opt in for the 2023-24 season before then becoming a free agent.

The 1+1 contract structure, combined with the pay cut he is reportedly taking next season, gave the Sixers more flexibility this offseason while also leaving them with options going forward. For Harden to take a $15 million pay cut for next season, many thought it would come at the cost of adding more years onto the extension. However, Harden elected to bet on himself by taking the path of future flexibility (being able to hit the free agent market as soon as the summer of 2023) while also helping put the Sixers in a better position to win a championship in the next year or two over taking less money in a longer-term contract.

The best outcome for the Sixers would be to take advantage of Harden’s production on the court for at most the next two seasons before letting him go in free agency as he gets deeper into his 30s. This would allow the team to have major cap flexibility as both Harden and Tobias Harris‘ contracts come off the books heading into the summer of 2024, leaving the team with boatloads of cap space to both presumably re-sign rising star Tyrese Maxey (whose contract also comes off the books then) and to rebuild the roster around Joel Embiid.

Harden taking this big of a pay cut should warrant some praise going in his direction. However, the true value of this contract extension can only be determined by his play on the court. On that front, Charania reports “everyone around Harden has understood the focus on his workout regiment this offseason.”

Everyone around Harden has understood the focus on his workout regimen this offseason and a championship goal for 2022-23. His close relationships with those around the organization, including Michael Rubin and Daryl Morey, played a major role in trust between the two sides. https://t.co/q1eDY9xrDy

Harden, at times over the prior two seasons, has looked like a player whose age is beginning to catch up with him. However, even a declining Harden still provides a ton on the court. At 32 years old (he will be 33 once next season begins) and reportedly battling a nagging hamstring injury, he still averaged 21 points, 7.1 rebounds and 10.5 assists per game in 21 games last season after being traded to the Sixers. He also willed the Sixers to even the second-round series against the Miami Heat at 2-2 with a dominant 31-point performance in Game 4. There is clearly a lot left in the tank for Harden, and if it is true he is improving his workout regimen to come into next season fully healthy, the Sixers will be in great shape for both next season and the future.