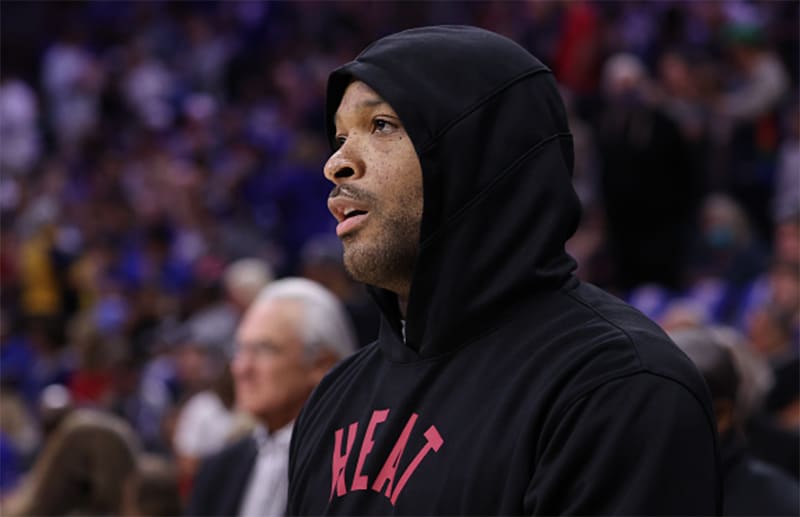 The Philadelphia 76ers came into free agency with some clear areas of weakness on the roster. They were in desperate need of toughness, defense and more 3-point shooting.

The team did a good job on Thursday night, the opening night of free agency, of addressing those weaknesses by signing P.J. Tucker and Danuel House Jr. Both of those players provide an immediate infusion of toughness and defensive versatility to the roster.

Tucker, at 6-foot-5, has the versatility to defend forwards while also being able to play as a small-ball center on occasion. He might be small on paper, but he certainly does not play like it. He has a stout frame (245 pounds) while also having the ability to put himself in positions to succeed defensively. He is crafty and plays with a ton of toughness and energy, all things the Sixers have lacked in recent memory. The veteran forward also is not afraid of getting in your face and being an enforcer when necessary, as seen in the clip below from a postseason matchup when he was a member of the Milwaukee Bucks in the 2020-21 season.

Offensively, Tucker impacts the game in a few ways. He is a solid 3-point shooter, albeit on low volume. He knocked down a career-high 41.5% of his shots from beyond the arc on 2.7 attempts per game last season with the Miami Heat. Most of his 3-pointers come from the corners, where he shot 71-for-172 (41.3%) last season. His shot chart from last season, via NBA.com, shows where his two main areas of success are in terms of scoring the basketball: 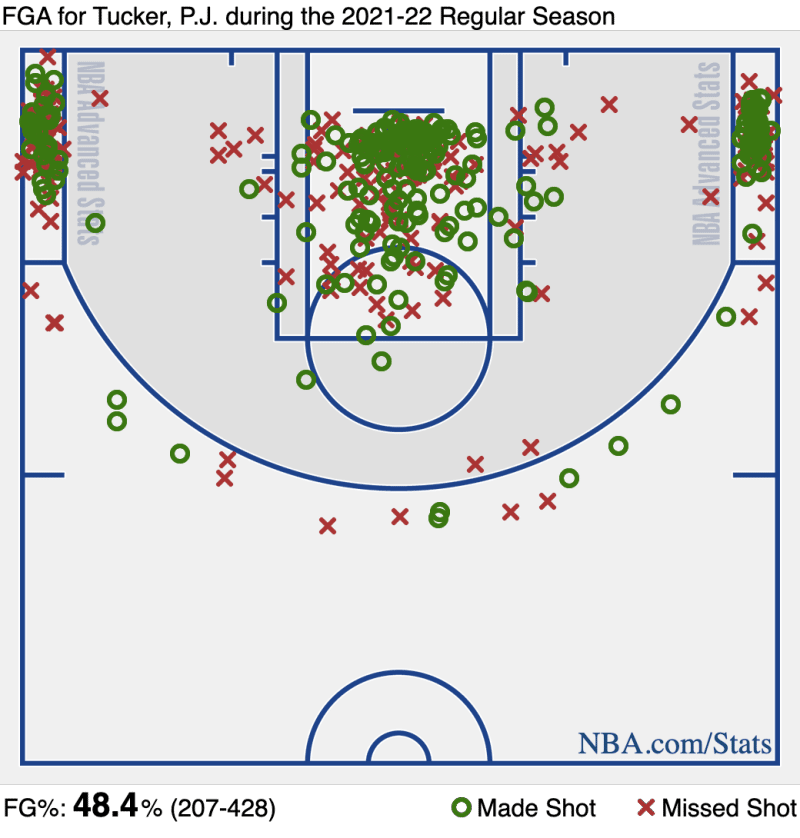 He also showed good touch on floaters around the rim and restricted area, which is important because it prevents him from being a purely one-dimensional scorer.

Tucker spends most of his time on offense in the corners, where he can either space the floor by knocking down open threes or come inside to make his presence felt on the offensive glass. He has no issue getting physical inside, especially when it comes to offensive rebounding. Last season, he averaged 1.4 offensive rebounds per game.

House Jr., the team’s other major signing thus far in free agency, shares some characteristics with Tucker. He brings toughness and versatility to the floor mainly through his ability to defend multiple positions. He has solid size (6-foot-6, 220 pounds) for his position, and is not easily pushed around. He has shown some signs earlier in his career of being a three-and-D player, something the Sixers are in desperate need of. He is a career 36.6% shooter from 3-point range on 4.2 attempts per game.

He has bounced around the league, playing on three teams last season alone. However, he seemed to regain his footing at the end of last season with the Utah Jazz. In 25 games (19.6 minutes per game), he averaged 6.8 points, 2.7 rebounds, 0.5 blocks and 0.6 steals while shooting 41.5% from 3-point range.

On paper, the 29-year-old should be a good fit coming off the bench in Philadelphia. The best years of his career came when he was playing next to a dominant ball handler capable of creating offense for others. He played both the 2018-19 and 2019-20 seasons alongside James Harden on the Houston Rockets, and the two are now reunited in Philadelphia. In those two seasons, he averaged 10.1 points, 4 rebounds and 0.9 steals per game while shooting 38.1% from 3-point range.

House, most importantly, is a solid player on both ends of the floor who can come off the bench and fit right in. The Sixers lacked those types of players last season. Their bench was composed mostly of limited players who were not competent on both ends of the floor such as Matisse Thybulle and Georges Niang. The House signing addresses that weakness in the roster in a big way.

Where does this leave the Sixers heading into the remainder of the offseason?

Harden opting out of his $47.4 million player option for next season opened up the flexibility necessary for the Sixers to sign Tucker and House. The team is reportedly using the non-taxpayer’s mid-level extension (NTMLE) to sign Tucker to a three-year, $33.2 million fully-guaranteed contract. They followed that up by signing House to a two-year, $8.5 million contract (with a player option in the 2023-24 season) using the bi-annual exception (BAE).

The Sixers currently sit $36.434 million below the tax apron threshold, according to Derek Bodner of The Daily Six newsletter. With 15 players on the roster, this means, barring any other moves, the most Harden can make next season is $36.4 million. Factoring in an 8% annual raise, the most Harden could make in a potential three-year extension is roughly $118.1 million. Using the NTMLE or the BAE, and the Sixers used both, results in the tax apron acting as a hard cap throughout next season.

The next big shoe to drop for the Sixers is to negotiate a contract extension with Harden, and the two sides are reportedly began discussions this weekend.

The Sixers are likely done making moves in free agency, with the possible exception of a veteran minimum signing or two. However, multiple reports have stated the team is still heavily involved in the trade market.

President of basketball operations Daryl Morey is still in pursuit of trading for Eric Gordon, according to Keith Pompey of The Inquirer. The team has been dangling Matisse Thybulle, a two-time Second Team NBA All-Defense selection, in trade talks in an attempt to entice Houston to give up Gordon.

However, making the money work might be the most difficult thing to do in any potential trade sending Gordon to Philly. Gordon is set to make $19.5 million next season and the Sixers are, with a Harden extension factored in, already presumably right up against the tax apron. Clearing the roughly $15 million cap space necessary to add Gordon to the roster is highly difficult if not impossible without either trading Tobias Harris, Harden taking an even bigger pay cut than the already is or a third team becoming involved. Michael Kaskey-Blomain of CBS Sports reported on Saturday afternoon the trade discussions were ongoing and that a third team might be necessary to facilitate the trade.

Trade talks between the 76ers and Rockets revolving around Eric Gordon are still active, per a league source. Matisse Thybulle has been mentioned in the talks, but a third team might be needed to facilitate a deal.

Regardless of whether the Sixers end up trading for Gordon, the team had a good offseason. There will be some who quibble about the amount of money they paid to both Tucker and House, but the two moves undoubtedly improved the team. They went into the offseason having clear holes in the roster at the wing and in toughness on the court, and the moves in free agency more than adequately filled those holes. Only time will tell if the signings truly moved the needle for a team which has struggled to get past the second round of the playoffs in recent seasons, but the team is undeniably closer to competing for a championship now than they were before free agency began.