Worthless To You Doesn’t Mean Worthless

About a month ago I wrote a piece about the encroaching social pressures that now accompany even a midweek game between two going-nowhere clubs in the middle of August.  In short, I’m not a fan of any of it.  Specifically, I focused on the emerging norm of surrendering a hard-won caught home run or foul ball to the kid you didn’t even know was sitting three seats down or risk suffering the wrath of the mob.  I wrote that I found such mob rule in the stands frightening, depressing and sad.  I wrote more but will stop the summary here; you can read the piece for yourself if you’re so inclined.

Anyway, it was a throwaway piece in many ways.  I hadn’t written much of anything in a long time and felt the need to do something, anything, productive.  You can decide for yourself if what ended up in virtual print satisfied that criteria.  Whatever.  If nothing else it at least scratched an itch and I was just happy to have finally written something.  And that was that.

But not really.  Because of all the things I’ve written for this blog, this one – by a mile – got more traction than any other.  Scores of comments on both sides of the ledger – heated, passionate ones – let me know that I’d touched a nerve.  So I want to briefly follow up to further explain just why it might be that a grown-up would want to keep that caught foul or home run ball, leaving aside the social pressure issue for a moment.

Attending a baseball game means different things to different people.  For some it’s little more than an evening out.  For others it’s much more – an experience that holds the potential for a lifetime memory.  And for that subset – a shrinking one to be sure – small tokens that embody that experience can trigger a lifetime of memories.

And that’s what a caught ball can represent.  It’s not the ball, per se.  If it was, they’re readily available on Amazon for around twenty bucks.  Paul Lukas, in his Uni-Watch post yesterday (reflecting on my post) put it best when he wrote that he as well would keep the ball but only under certain conditions:

“I should stress here that I’m referring to a ball that was hit by a player (not lobbed by a coach or ballboy), during the game (not during batting practice), and caught or at least touched by me on the fly (not retrieved from under a nearby seat). If the ball fails to meet those three criteria, I’ll be happy to surrender it to the nearest snot-nosed tyke.”

Paul’s conditions encapsulate precisely why a caught ball might mean quite a lot to a certain type of fan – because it represents a cherished experience.  Contrary to the many who have commented that it’s childish for an adult to want to bring a baseball home from a game, it’s my position that it’s not about the baseball at all.  It’s about the memory that ball encapsulates.

There have been no shortage of studies focusing on the emotional value of experiences over things.  We might think our lives would be so much better if only we had an expensive new iPhone but, really, we’re more likely to cherish an experience we might spend that same money on and for much longer.  In practical terms, what does that mean for us?  As James Hamblin from Yale’s School of Public Health put it in an article in the Atlantic a few years ago:

“That means making purchasing an experience, which is terrible marketing-speak, but in practical terms might mean buying something on a special occasion or on vacation or while wearing a truly unique hat.”

In short, the object is more likely to bring us greater pleasure if it’s tied to an experience.  Its monetary value is less of a predictor of the joy we’re likely to extract from it than perhaps we’d care to admit.  In fact, it’s largely irrelevant.

Which brings us back to the caught baseball.  Focusing on the relatively worthless ball, itself, is misdirected. Rather, it’s the practice of bringing it home and proudly displaying it on our mantelpiece as a memory-triggering device that constitutes the value. It’s this process that transforms a valueless ball into a priceless artifact. For some fans, the caught ball is the equivalent of an Aloha shirt others might purchase while in Hawaii.  It’s not the ball and it’s not the shirt that are important.  It’s the memories they stir up.  Which is what renders them truly invaluable in a way the newest, shiniest iPhone never could.

I’m going to go out on a limb here and suggest that we all treasure are own personal stables of otherwise worthless memory generators.  As for me, until they were rendered obsolete by those iPhones a few years ago, I used to save every paper ticket to every sporting event I ever attended.  I’ve got hundreds of them, collected in a binder that I pull off the shelf every so often to wade through, each ticket triggering its own unique set of memories.  As objects of commerce they’re less than worthless if such a thing is even possible.  But I wouldn’t think of ever getting rid of them.  Here are the tickets to the first game I ever went to: 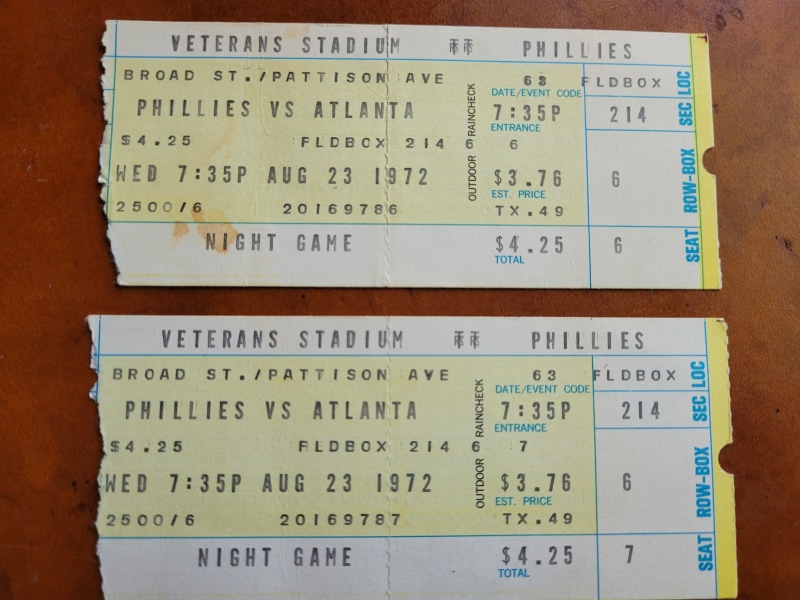 And, better still, here’s the Ticketron envelope they came in, with directions to the relatively new Vet written in my dad’s hand: 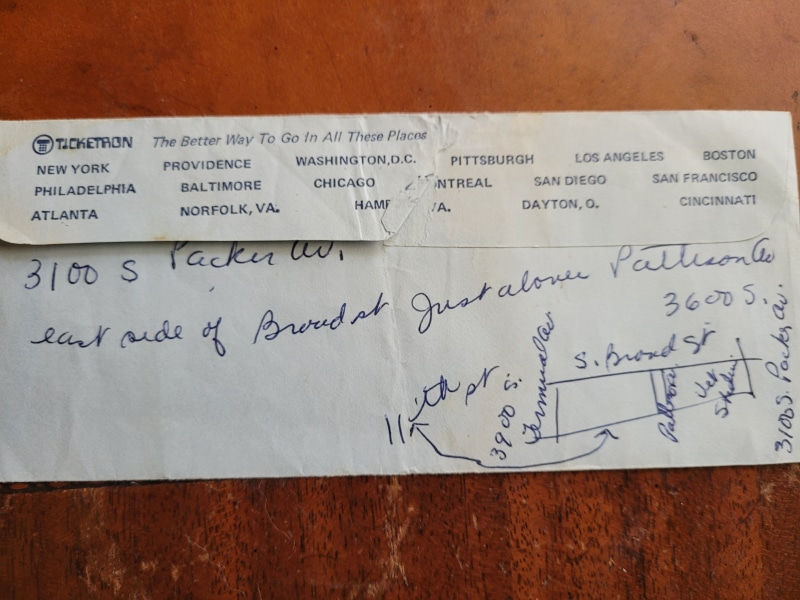 I’ve got World Series tickets, Opening Day tickets, and a ticket to an otherwise forgettable mid-70s game against the Astros that remind me that I saw Mark Lemongello pitch that evening, which was something that thrilled me because I couldn’t believe an actual person could have the name Lemongello.  Without that ticket I’d surely have forgotten Mark Lemongello ever existed.  With it I smile every time I come across it.

To every person who can’t see the value in bringing a caught ball home I’d ask to tour their living and rec rooms to see the baubles they’ve collected from their various life experiences which have little to no monetary value but outsized emotional value, at least to them.  And that’s all that matters.  In fact, it matters exponentially more than their sticker prices, as all those studies have demonstrated.

So for those of you who are having a tough time understanding this, the hope here is that you stop for a moment and let your eye catch one of those monetarily worthless trinkets you so proudly display.  Those trifles that make you feel better, that make you smile, that trigger a memory you so badly don’t want to ever let go of.  Maybe a caught baseball isn’t one of them.  But understand that for some of us, it is.