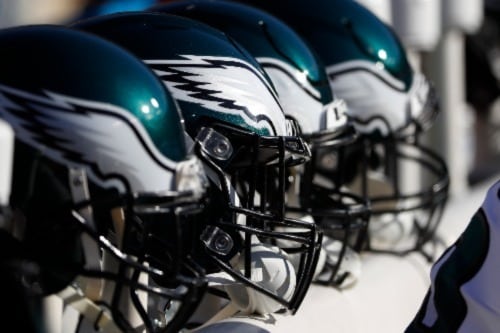 The Eagles officially have a 53-man roster to begin the 2022 season. The team will almost certainly hope to sign some of the players they cut back on the practice squad once they can begin signing people to that.

The list began to take shape over the preceding days and those that watched our cuts tracker, could likely follow many of the position groups starting to take shape.

This position was going to be a minor shock either way, whether the Eagles only chose to keep two quarterbacks or they decided to keep one of Sinnett (who played poorly) or Strong (who didn’t play) around. The Eagles opt to go with the former and keep extra talent elsewhere on the roster.

While Scott and Gainwell would seem like they were competing for spots, it may have been more for who will see the most regular-season snaps as these three were essentially locks, particularly with Huntley being waived.

Goedert and Stoll were the only two players at the position that seemed to have a claim to a roster spot. Calcaterra is a bit of a surprise. He missed most of the preseason with injury, so there wasn’t much to show. He looked good in mop up duty late against the Dolphins, but it’s hard to imagine any undrafted player who was in the same situation even gets a real look that late in the preseason let alone a chance at a roster spot. Still, he did show some ability and if the Eagles can get him past his history of issues with injuries, he could be a strong player to develop.

The top three were never a doubt and Pascal was the presumed fourth-man, but there will be much debate after that. Following yet another unimpressive preseason, Reagor once again finds himself on the 53-man of the Eagles and was not traded. It’s a bit of a shock no one offered the Eagles enough to get them to part with him if only to try and keep one of Britain Covey, Devon Allen, or Deon Cain on the roster.

As the fifth receiver, Reagor can offer special teams play in the form of returns but that has not been an area he’s shown much ability at the NFL level, making him an odd keep in such a small role, particular with what Covey or Allen could provide from that perspective.

It’s not often you see a position with seven spots locked down, but an Andre Dillard trade was the only thing that would have knocked any of the first seven players listed here off the 53-man roster. Driscoll has been injured for much of camp, but has proven reliable over the years. Opeta had a very strong camp and seems to have improved again, making him a valuable depth piece.

Brett Toth being on PUP paved the way for UDFA Josh Sills making the roster. He beat out Jack Anderson and Kayode Awosika, players who the team had invested the last season worth of time in,  as well as Le’Raven Clark, a player who is a top name on the market following his own release, so his making the roster is impressive.

The question of whether the team will keep a fifth defensive tackle is answered as Tuipulotu is back on the roster for a second season. He has really looked improved in camp this year and could prove to be a valuable backup. Depending on the way Gannon schemes, Cox, Hargrave and Williams could all be used from an Edge position at times: such a format may allow Tuipulotu to see more snaps that one might initially think.

Graham, Sweat and Barnett were set at defensive end with Reddick set at the clear top OLB, but Kyron Johnson really came on strong in that final preseason game showing a defensive ability in the run game that hadn’t necessarily been a large part of his prior scouting report. Patrick Johnson and Tarron Jackson return from 2021 when the Eagles drafted them and have flashed glimpses at times.

The top three here were no-brainers and Bradley has improved on defense in addition to his leadership on special teams making him a difficult cut. Davion Taylor didn’t show much in camp or the preseason, so it’s a valid question whether his inclusion may have had to do with his status as a recent third-round pick.

The starters were locked in when Bradberry signed and McPhearson was all but a sure thing as the top backup. Scott played some good football this preseason and his versatility to also play safety if needed certainly didn’t hurt his case for a rosters spot. What’s surprising here is Josh Jobe. One of just three UDFA the team kept on this initial roster, Jobe did not look good in preseason and gave up catch after catch along with missing open-field tackles. The Eagles must see potential in him he has yet to show on a consistent basis.

With the acquisition of Gardner-Johnson, the top two safeties were set. Wallace remaining as the third option is a bit of a surprise.

Blankenship really only played mop-up duty in the preseason games, but he showed a knack for hard hits and crashing on the ball; there’s good reason that the Eagles would want to give the UDFA from the FBS level more time to adjust and develop.

For the second year in a row, the Eagles brought in no competition for any of these spots, so these guys have been locks.