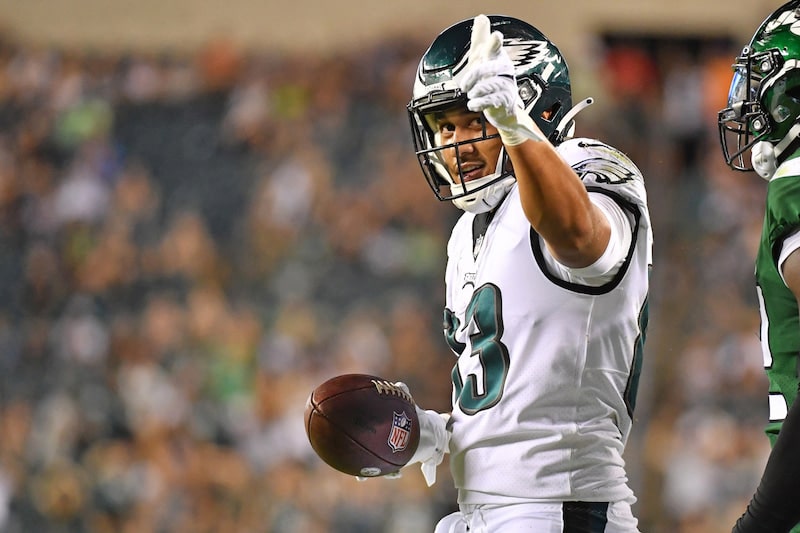 The preseason is all about getting ready for the upcoming year and while the games themselves may not be as exciting for fans with the end result not mattering, they are of great importance to those on the roster bubble.

These games provide a platform for the entire league to see what they can do in a live-game situation. For young guys and undrafted players, these can be the reps that make or break a career. It can separate the players like Jack Stoll or TJ Edwards from those who will have a much shorter career like some highly-thought-of guys do (Tyler Orlosky or Michael Warren II as a few examples).

So the question is, who stood out (good or bad) for the Birds in their matchup with the Jets?

Admittedly, Blankenship is a guy that I thought could prove to be a valuable acquisition since he signed as an undrafted free agent a few months back, so there may be a bit of bias there. That said, he was easily among the most impressive secondary guys later in the game. He actually ended the game with a contest-leading eight tackles, six of which were solo.

He put on tape a strong ability to get to the play and to make the tackle on special teams and on defense, even from a deep safety position. The one thing working against him in this contest was that the Jets became a run-heavy offense with short passes, so Blankenship was not tested in coverage. What he did in the open field in the run game should be enough to earn him a closer look and put him on the in-road to a spot on the roster or practice squad.

Jobe was someone that fans seemed to focus in on in this year’s undrafted free agent class. The consensus seemed to be that fans were happy with the Eagles taking players from colleges like Alabama and Georgia and Jobe added another Crimson Tide member to the roster.

Unfortunately, Jobe’s preseason debut was rough at best. He wound up with five tackles, but nearly all were in coverage after he allowed a catch. What makes that really rough is not only that in multiple of these instances did the quarterback just stare down his man the entire play, but that he had a few missed tackles in run coverage. It’s hard to imagine any scenario where he hasn’t dropped down the depth chart following that.

Following the first-team offense’s exit, there was hardly anything of much prominence to see from the Birds offense. That is, until Noah Togiai became the target for many of Sinnett’s passes on the Birds’ penultimate drive.

Togiai proved to be the receiver (tight end) that the Eagles third-string quarterback could rely on to move the chains. Four catches on four targets for 29 yards. He also showed some ability to fight through contact in the process. With an uncertain depth chart behind Dallas Goedert and Jack Stoll as the lead blocking tight end, this performance could go a long way to keeping Togiai with the team.

Huntley was heavily featured on Friday night, surprisingly much. He had 16 carries and five targets on the night. Strictly from the box score, it would seem Huntley had an alright but unimpressive night. He had 48 yards on the ground (average of three yards per carry) as well as 39 yards on four catches. He also scored a touchdown.

Huntley showed a decent ability to pick up short yardage up the middle, but it’s hard to believe that that’s what the Eagles would be looking for out of the 5-9 back. The thing that puts him on the outside in this match-up was his vision. Huntley is billed as a quick/explosive player, but no such plays developed against the Jets third-team. His longest play of the night was under 10 yards. What really shines a light on this issues, however, was how Cam Jurgens took over that same Jets defense. He was getting blocks in the second level with regularity, but Huntley wouldn’t burst through those holes. When Jurgens finished a block, Huntley would instead move laterally or backward to try and find a path different than the one cleared for him; there were a few times he probably should have hit those explosive plays simply by powering through the holes his offensive linemen created.

With Landon Dickerson and Brett Toth among those who weren’t available, fans got to see some offensive linemen play who are quite a bit down the depth chart. Significant amounts of snaps were played by guys who may not even be in the team’s top 10 offensive linemen come the beginning of the season. While there wasn’t too much that stood out on that front, Kayode Awosika, in his second season with the team, showed some good power and technique. The 8-10 spots at the position (depending on how many the Eagles choose to keep this season) are a bit up in the air on the offensive line and play like that is certainly going to have Jeff Stoutland go to bat to try and get him one of those roster spot.

Stevens didn’t necessarily play poorly in this game, but he only came away with two tackles. Stevens is a player who, after being a draft pick in 2021 and spending the season on the team’s practice squad to learn the ropes for playing linebacker on the squad (after transitioning from college safety). He’s a player who should be looked at to begin making an impact and he didn’t stand out from the rest of the backups against the backups for the Jets. He’s got time to prove himself and he may still have time on the practice squad in his future, but his being an afterthought in this contest does not bode well for his chances of making the roster.