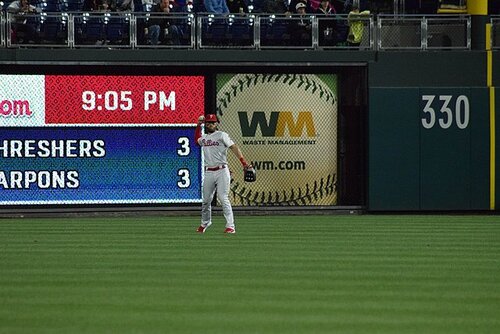 Even though the Philadelphia Phillies lost the series in New York, they’ve won 14 of their last 19 contests, including seven consecutive victories, a bullpen-game loss in Atlanta and an injured Kyle Schwarber in Queens. But keep in mind, they also accomplished this without their brightest star Bryce Harper.

According to JT Realmuto in a recently televised interview, facing top starters will be the postseason norm for them and other playoff-bound organizations. Well, the rotation, the pen, the offense and even the defense haven’t been holding them back. The Phillies formula?

“Synergy – the bonus that is achieved when things work together harmoniously.” – Mark Twain

Entering the New York Mets series in Queens, the Fightins were 0-0 against them since June 1. Though, the new results clouded the picture of their current status and October aspirations. And while they went 1-2 in the away set, they’ll also face them for another four over next weekend at the Bank.

Since June 1, the Atlanta Braves are 47-19, the Metropolitans are 41-23 and the red pinstripes are 42-22. But their faithful view their franchises differently. Basically, positive Mets supporters are comparing their NLCS four-man staff to the Los Angeles Dodgers, while Braves fans are settling for the first wild card.

The locals here expect a postseason berth. Moreover, the Phils have mostly achieved their record without Harper and Jean Segura. And the Amazins’ had been without Max Scherzer and Jacob deGrom, plus the Bravos Ozzie Albies is still out. So, these stars will be fresh during the stretch drive and beyond.

The Phillies records from these points through Aug. 14:

In recent summers, the Fightins didn’t exceed the CBT (competitive-balance threshold) because it involves a two-year window. But doubting Thomases believed it to be an excuse, and they felt their big-ticket signings weren’t enough. On Opening Day, the Phillies were $6.6 million over the CBT.

The tally could increase by $1.6 million AAV if David Robertson achieves his contractual incentives, and he has already earned $1.075 million. Ergo, the current total is $17 million AAV over. But complaints about not picking up a top-tier starter and a better-hitting center fielder occurred with minimal thought.

For Noah Syndergaard, the Los Angeles Angels would have received nothing if he departed at 162’s end. Ergo, they had a choice between nothing or the best offer. And they waited for any last-minute proposals before trading him to the Phils with 15 deadline minutes left. Yeah, a salary dump!

Dave Dombrowski, PBO (president of baseball operations), realized the Halos were unloading burdensome contracts, and his offer was to absorb Syndergaard’s $7.4 million remaining plus part with Mickey Moniak and a prospect. Now, the PBO has filled his most pressing need due to the absence of Zach Eflin.

Robertson had Tommy John surgery leading to two missing campaigns, and some naysayers object to his return. However, insurance policies cover up to 75 percent, and any player can suffer a season-ending injury in any month. But if Robertson has a poor outing, will the boobirds descend on him like vultures?

While it cost Dombrowski a future catcher, Brandon Marsh, 24.5, has five years of control after ‘22. And he is the final piece of the solid up-the-middle defense the PBO wanted with Realmuto and Segura plus Bryson Stott’s emergence. Basically, Dombrowski swapped Moniak, a center field replacement, for Syndergaard.

If Moniak had hit .250 with 10 bombs, management would have given him 2-3 summers to go through growing pains and to make an impact. Well, Marsh has eight homers while batting .226, but he could finish at .240.

While some Phillies faithful squawked during April and May, August and September are mostly game to game but inning to inning for a confrontational series. Yeah, you’ll be watching intensely because this isn’t the 2011 squad of four aces and 102 triumphs: a franchise record.

The September jinx will again be front and center in 2022’s final weeks, but the reality is the Fightins were heading in the wrong direction in September and July of 2020 and 2021 respectively. Last season, the injuries to Eflin and Rhys Hoskins overcame Harper’s and Realmuto’s endurance at September’s end.

To date, the Milwaukee Brewers have gone from being atop the National League Central to struggling for a playoff spot. And the San Diego Padres have enough to hold off the Brew Crew for a wild-card berth. Moreover, the red pinstripes have a shot at home-field advantage in the Wild Card series.

The seven battles with the Metropolitans will reveal if the postseason-famished Phils are ready for top competition, and they must win four contests to validate their strongest aspirations. Yes, the first set had their best three hurlers in one-to-three order based on pitch-count limit, while the Fightins’ order was three to one

If the red pinstripes win the first or second wild card, they will face the Braves. And they are 6-6 versus Atlanta: 3-3 at home and away, plus both clubs are evenly split since June 1 at 4-4: 3-3 at the Bank and 1-1 on the road. Realistically, they will play the three-game Wild Card Series in the first wild-card’s park.

In Hotlanta, the Bravos fanbase is slowly lowering their “we are the champions” mantra down a few pegs after going 2-7 against the Amazins during their 47-19 mark since June 1. Today, Mets and Phils fans believe their squads are different in ‘22, but what did Jimmy Rollins reportedly say about our club before Friday? This team has it!