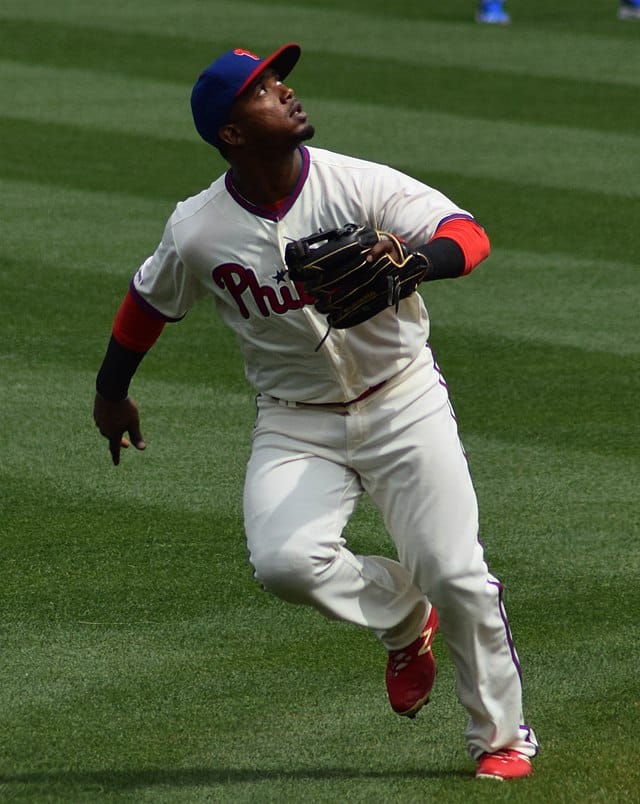 Despite releasing Didi Gregorius with the options of Johan Camargo and Yairo Muñoz. The Phillies now have a “problem” with their infield… Who is going to play?

If we include first base/designated hitter into this discussion, there are going to be issues with playing time. Their depth looks somewhat like this:

All of these guys are talented players who deserve playing time and it’s going to be difficult to keep everyone fresh while also chasing a playoff berth. All of these positions have starters that won’t lose their spots for good reason but still quality backups behind them.

Starting at first base, Rhys Hoskins has been one of the most valuable players since Bryce Harper went down in San Diego. Hoskins since June 26th has a slash-line of .268/.356/.583 with 11 homers and 16 walks.

During the same stretch, Kyle Schwarber has been hot and cold, Nick Castellanos struggled until recently, so they needed Hoskins’s help until Bohm and JT Realmuto went on their hot-streaks.

Darick Hall by no means should take over at first base as he is only a platoon DH, the bigger question is what happens when Bryce Harper comes back.

Not that anyone would rather have Hall than Harper but Hall has done really well in his platoon role. In 109 plate appearances, Hall a .282 average and eight homers. That’s about 44 home runs in a 162 game season. Hall has certainly done enough to stay up but how can they possibly keep two strict left handed DHs?

At second base, you have Jean Segura, who is certainly the everyday player. Segura broke his finger back in early June and came back ahead of schedule so there is a chance they need to give him a few extra rest days.

While Maton can play both shortstop and third base, both are held by two easy starters and guys who deserve playing time on the bench.

No one is going to take Bryson Stott’s job but they also have a valuable player in Edmundo Sosa. Sosa came in a trade with the St. Louis Cardinals and in only a handful of chances his defense has already made an impact.

His glove is making difficult plays look easy at third and he even recorded a double in the Nationals series.

As I already outlined in my trade deadline grades article, Sosa’s defense is extremely impactful. So if he hits at all he deserves some playing time the Phillies will have a hard time offering him.

Finally at third, Alec Bohm is turning it around. Back on July 12th I traded Bohm for reliever AJ Puk for my mock trade deadline. Since that day, Bohm is hitting .380 with a .956 OPS. He has continued to flashes of power potential but still only two homers in that span.

Bohm is currently their three hole hitter and deserves the chance to play everyday, his defense has also continued to get better despite his athleticism and frame limiting his potential.

There is also utility man Matt Vierling who deserves a chance to play. Why include him with the infielders when he mostly plays center field? The Phillies traded for their everyday center fielder in Brandon Marsh and gave up Logan O’Hoppe to do it. He deserves every chance to play over Vierling.

Marsh is also a good fit with his defense since Schwarber and Castellanos play the outfield everyday.

Vierling has helped them in huge ways during their run under Rob Thomson, his home run off Josh Hader helped sweep the Brewers. His defense has been mostly fine and the bat has been more of a positive than others. He, just like everyone else, is a good player but stuck with better players in front of him.

The Phillies have a really good problem to have, a bunch of good or interesting players but with no spots for them to play. The Phillies for the first time in a while have strong infield depth.