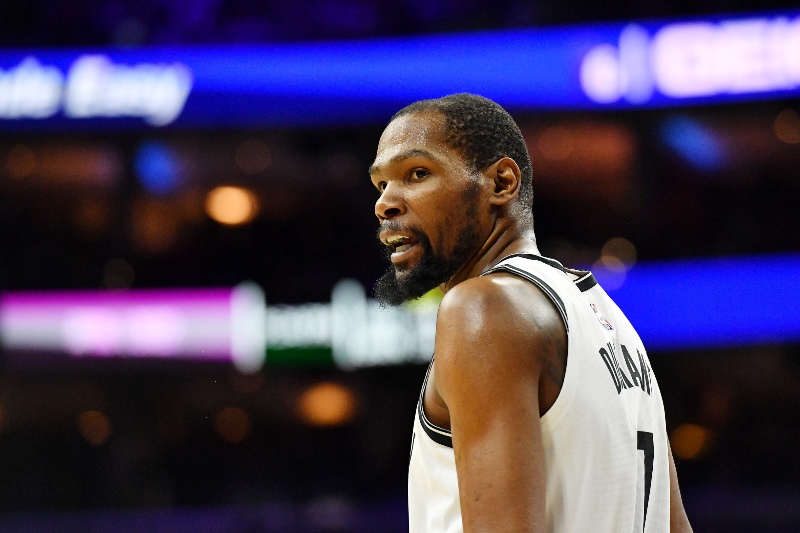 The Brooklyn Nets organization has been a mess for much of the offseason ever since Kevin Durant requested a trade. He has placed a ton of demands regarding which teams he is open to playing for. Thus far, the Miami Heat, Boston Celtics, Phoenix Suns and Toronto Raptors have dominated the conversation around Durant.

According to a report Wednesday from Ian Begley of SNY, the Philadelphia 76ers are beginning to step into the conversation. “As of earlier this week, there were high-ranking members of the Sixers who’ve felt strongly about engaging with Brooklyn on a Durant trade.”

It was only a matter of time until the Sixers were connected in some fashion to the Durant trade talks. Durant is one of the greatest players of his generation. Adding Durant next to perennial MVP candidate Joel Embiid would immediately lead to the formation of the NBA’s best one-two combination. Any Sixers fan who would say no to the addition of Durant, regardless of the cost, is nuts.

What would the Sixers be able to offer that would potentially entice Brooklyn in a Durant trade? The package would start with burgeoning star guard Tyrese Maxey while also presumably including Tobias Harris and Matisse Thybulle. The Sixers are unable to trade any of their first-round picks until 2029 due to the Stepien Rule. Draft pick compensation would not be a major factor in any trade package.

Is an offer of Maxey, Harris, Thybulle, a 2029 first-round pick and a 2031 first-round pick enough to pry Durant to Philadelphia? The answer is likely not. Boston can center their offer around Jaylen Brown and role players in addition to draft compensation. Boston has much more flexibility in terms of the amount of draft compensation they can include in any trade package for Durant. The Sixers lack the necessary resources to be able to outbid most other teams pursuing Durant.

However, the market of suitors is slimmed down due to both Brooklyn’s desire to still wield a competitive team post-Durant trade and Durant’s demands regarding where he gets traded to. How long would Brooklyn be willing to hold onto Durant in an effort to get the best package in return? Durant recently met with Nets owner Joe Tsai where he laid down an ultimatum: Choose Durant or the pairing of general manager Sean Marks and head coach Steve Nash. Tsai responded on Twitter with a statement backing the coaching staff and front office. The end result of that meeting? Increased pressure for Brooklyn to pull the trigger on a Durant trade.

Another thing of note from Begley’s report is that Durant “also sees Philadelphia as another desired landing spot.” The timing is interesting as it comes just days after Durant was seen spending time in London with James Harden. Left up for debate is whether or not that has anything to do with Durant adding Philadelphia as a potential landing spot.

The Sixers still are not likely to win the bidding war over Durant. However, after this report they perhaps are a few steps closer, and the idea became a bit less far fetched.