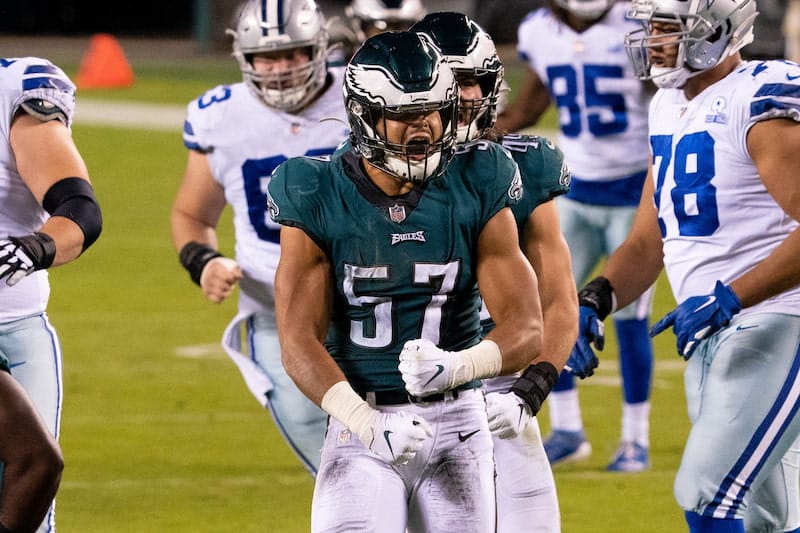 Back in April 2019, the Eagles made their usual moves to sign undrafted free agents. To no surprise, they signed a few more UDFA than usual considering the low amount of picks they had made in the preceding rounds.

I covered those moves right here on SportsTalkPhilly and I remember being particularly excited by one signing in particular: linebacker out of Wisconsin, TJ Edwards.

Specifically, what I wrote (sans the minor spelling error edited out):

A four-year starter from Wisconsin, it is a bit surprising that Edwards went undrafted. For those worrying about how the Eagles did not draft a linebacker despite it being their most glaring need, this one is for you.

Playing for a ranked college team against many ranked opponents, Edwards racked up 366 tackles, 10 interceptions, eight sacks, 15 defensed passes, forced a fumble and recovered another. Edwards is the most likely of any player on this list to both make the roster and make an impact.

He was certainly the most interesting prospect they signed, at least to me, at that time. It was unbelievable that Edwards hadn’t been drafted in the first place.

But the point of this is not to point out that I had an accurate analysis at the time, but to prove that I was high on the linebacker at the time and even I didn’t give him the respect he deserves at this point. At the time, Edwards was seen largely as a run-first defender that would have little impact on the passing game, particularly in coverage.

Edwards has made analysts and fans alike eat their words. There may not be a single person outside Edwards’ personal circle that thought he could be as effective all-around as he has proven to be.

From playing just over 10% of the defensive snaps in 2019 as an undrafted rookie, Edwards has spent the last two season working himself into the role of a mainstay in the Eagles offense. In 2021, he played nearly 65% of snaps on his way to recording 130 tackles along with a sack, an interception, a fumble recovery and five defensed passes. He did this with his fellow linebackers rotating around him due to release, injuries, etc. Edwards simply moved to whatever role was asked of him.

Of course, the fanfare has centered around the additions of first-round talent Nakobe Dean, who the team grabbed after he fell into the third round, and Kyzir White, who the team signed in free agency. Even former third-round pick Davion Taylor still has some hype around his raw abilities.

Still, there have been consistent reports that Edwards is among, if not, the best performing players on the defense so far in camp.

TJ Edwards continues to impress. He has a GREAT feel in zone coverage. Not many linebackers can make plays like this on Dallas Goedert. #EaglesCamp #Eagles pic.twitter.com/98VwqBiRNP

That’s a highlight play in coverage for a player whose biggest weakness has always seemingly been his speed and ability to keep up with receivers. Fans may continue to argue about who should be starting come their first game against the Lions on September 11, but Edwards has proven a work-ethic and ability to improve year after year. It’s the kind of talent that should keep him on the field for well over 60% of snaps again going forward.

There is so much to look forward to with the youth on this team and, frankly, quite a few players being overlooked and Edwards is one of those guys. It’s about time more people started changing how they viewed Edwards’ role on this team.

It may not be too long until the Eagles front office starts thinking about that, too – offering an extension longer than the one-year extension they gave him last season.