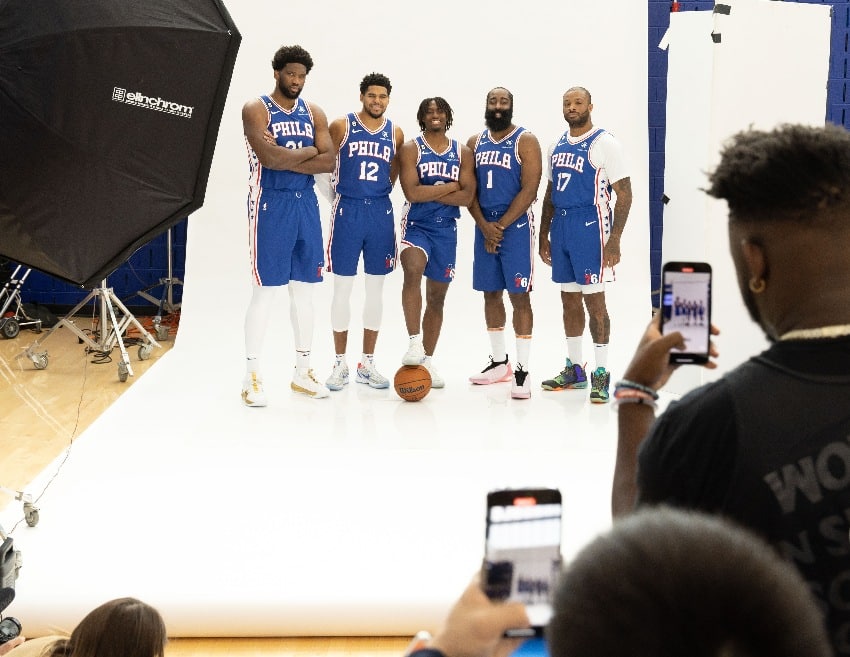 The Philadelphia 76ers held media day on Monday morning at their training complex in Camden, New Jersey. The team begins training camp on Tuesday down in Charleston, South Carolina. Here are some takeaways and other brief bits of news from the day.

Arguably the most consequential piece of news from media day is James Harden’s improved health and mindset heading into this season. He had been battling through a hamstring injury over the previous few seasons that vastly limited his explosiveness on the court. He was still able to show some flashes last season of the “Houston Harden.” During his first four games in a Sixers uniform, he averaged 26.8 points on 59.2% shooting from the field. However, it became clear throughout the remainder of the season and into the postseason Harden’s health was preventing him from playing at the high level he was accustomed to.

The 33-year-old went into some detail, much more than he usually gives up, on Monday about his struggles last season.

“Mentally it was very, very difficult for me, just because I’m in love with the game of basketball,” Harden said. “It was very difficult. A lot of tough times, a lot of dark moments, which I’ve never really went through [before]. I’m in a really good space right now, and I feel like I’m back to where I needed to be, and where I’m supposed to be. The feeling is great.”

Harden revamped his workout regimen throughout the offseason. He joked during the press conference that he lost 100 pounds this summer while declining to give a more serious answer. However, it is clear he is coming into training camp vastly healthier than the way he ended last season.

“At this point it’s dieting, it’s proper rest,” Harden said. “And then for me it’s strengthening my muscles, gaining more muscle mass, which I’ve always had it’s just the last year and a half I really wasn’t healthy enough to put the proper work in like I’m used to. So this summer was huge for me in that aspect.”

Getting healthy, both mentally and physically, is a gigantic step towards potentially having Harden get back to consistently producing at a near-MVP level.

Despite keeping the core of the roster intact this offseason, the Sixers are heading into this coming season needing to improve their chemistry. The team only had Harden for 21 regular-season games last season, and the additions of P.J. Tucker, De’Anthony Melton, Danuel House Jr. and Montrezl Harrell this offseason result in the roster needing some time to gel together.

Harden did a good job beginning the process throughout the offseason. He gathered together a lot of the players for informal workouts in Los Angeles throughout the summer. Head coach Doc Rivers mentioned 15 players participated in these workouts.

“In the summer being able to get everybody together is a hard task. But everybody was there, we were able to get up and down, play 5-on-5, go out to dinner, just being able to be around each other,” Tobias Harris said. “That’s how you build chemistry is just being around each other, communicating and talking in those situations. It was a great time.”

Most of the players the team added this offseason already had prior connections to either president of basketball operations Daryl Morey, Rivers or Harden. Morey chalked up the connection, which generated a lot of headlines in the offseason, to coincidence before saying things like that happen when he and Rivers have been in the league as long as they have.

Harden has stepped into more of a leadership role for the Sixers both through the moves he allowed to happen by taking less money in his contract extension and by organizing team workouts in the offseason. House Jr., who played parts of three seasons with Harden in Houston, spoke about his leadership abilities.

“He’s a selfless guy. On and off the floor, he do a lot of great deeds that are un-talked about and he don’t want credit from it because it’s nothing but heart,” House Jr. said. “Growing up around him, you see the things he does on and off the court, it just makes my respect for him as an elite athlete and what he’s doing so much greater. He’s a tremendous leader on and off the court, a selfless guy, and he’s always willing to make sure he can help you in any way possible.”

“This is the best talent I’ve had since I’ve been here,” Rivers said. He then went on to point out, “We have to become a team. Having a collection of individuals is great, but that says nothing about a team. So for us we have to learn how to become a team first. If we do that, I love who we are.”

Defensive improvement should be the team’s main focus heading into the season. Embiid spoke about the team’s defensive goals and what he needs to do to help achieve them.

“Our focus is on defense. We aim to be the best defensive team in the league, and that’s gonna take all of us,” Embiid said. “I believe we got the right pieces. I gotta get back to not waiting until the 4th [quarter] to be that guy [defensively]. I’m planning on getting back to the level I was before I had all that offensive load.”

When asked about what he worked on in the offseason, Embiid sarcastically responded that he sat on his couch all offseason. So how specifically Embiid aims to improve and get back to being a consistently dominant defensive player is unknown.

The Sixers have the defensive pieces to wreak havoc on opposing offenses. Embiid is a proven good rim defender. The duo of Melton (3% steal rate last season) and Matisse Thybulle can potentially lock down guards on the perimeter. Thybulle, who led the league in steal rate (3.4%) last season, talked about what it takes to be good defensively.

“I think we could set the standard for how good you could be as a team defensively,” Thybulle said. “I think as far as what it will take to get there, it’s just a level of being bought in and being able to sacrifice yourself…I think we have everything we need to make that happen.”

The biggest question surrounding Thybulle, one of the team’s best perimeter defenders, is whether he can make enough improvements offensively to stay on the floor. He averaged 5.7 points while shooting 31.3% from 3-point range in 25.5 minutes per game last season.

Thybulle reportedly worked a ton on improving his outside shooting throughout the offseason. Part of that work included making some mechanical changes to his jumper.

“Just condensing my shot down, getting rid of wasted movement, which allows for more accuracy and consistency,” Thybulle said.

This offseason was the first full, normal one for him since being drafted in the 2019 NBA Draft. He spoke about how that allowed him to be able to fully dedicate his offseason to making necessary improvements.

“I didn’t really have a chance to work on myself the last two offseasons. The first [offseason] was COVID and there were no gyms. The second one I was working to win a medal at the Olympics with Australia, so there wasn’t a lot of space for me to just work on Matisse,” Thybulle said. “So this was my first chance to have a whole offseason, a real traditional offseason, and then dedicate it solely to improving myself. At this point it’s like, I’ve done the work. It’s just a matter of seeing where the cards fall. I have made the progress. I’ve put in the work. I’ve got up the reps. Now it’s just a matter of seeing how it manifests throughout season.”

Adding toughness to the roster

The Sixers came into the offseason in desperate need for an infusion of toughness to the roster. In stepped P.J. Tucker. He perfectly fits the kind of player the Sixers were looking for. He plays with attitude and is not afraid to get down and dirty when necessary.

Georges Niang said Tucker is a “warrior” and had one word to describe playing against Tucker last postseason: “Annoying.”

There are plenty of questions surrounding whether the 37-year-old will be able to hold up and produce at the same level. However, Tucker does not plan on slowing down at all. When asked about the concept of taking it easier on his body, he responded with “I don’t know what that is.”

Tucker went on to describe what he views goes in to being a tough player in the NBA.

“It’s being accountable and reliable, not backing down, every night different assignments, doesn’t matter. Being available, not being hurt, being able to go out there and compete,” Tucker said. “It’s so many different facets that go into being tough, but for me, the biggest toughness is the mental toughness. To be able to play an NBA season, play all games or most games, play in the playoffs like that. That consistency, I think that’s the biggest thing.”

Tucker should be a beneficial player for the Sixers. He has the veteran savvy, toughness and postseason experience to be able to vastly help the team on multiple fronts.

Other news, notes and tidbits