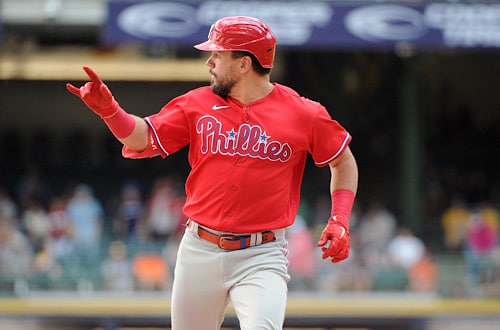 For the Philadelphia Phillies, the final full month has arrived, and with it the doubts, fears, and memories of recent season-ending disappointments have also. Me, I don’t believe in curses, jinxes, or low expectations regardless of the talent level. And you? Ergo, you either have a competitive team headed in the right direction, or you don’t.

When some fans view the Phillies roster, they point to every weakness and assume other organizations must be stronger. And, eventually, their club would be lucky to make the playoffs compared to franchises they know little about. In fact, some believe their own actions can determine a game’s or a campaign’s outcome.

“What makes earth feel like hell is our expectation that it should feel like heaven.” – Chuck Palahniuk

The Fightins have hit a rough patch after three consecutive months of playing over .600 ball, but naysayers might use the last six contests to define 2022. And disagreeing can make them question if you’re a real fan because negative and superstitious supporters “shout down” positive thinkers.

Some rely on curses, jinxes, lucky pieces of clothing or jewelry, or other amulets to explain something they don’t understand. Today, more information has lessened their need to depend on items to affect outcomes they desire. But most answers, however, are complex.

Desiring an easy solution to a complicated situation will never work because baseball is also 40 percent luck according to Charlie Manuel. To illustrate, a cold team can become hot and a winning club can start losing. Yes, a pitcher with a 3.00 ERA can have a bad outing, and a hurler with a 9.00 ERA can have his summer’s best start.

If you expect a sweep based on the opposition, you can make one defeat out of three or four games into a failure. In a 162-game schedule, a 120-win franchise will suffer 42 losses, and some will be to bottom-feeders. Any team can beat another on any given day or in any series.

For instance, the Arizona Diamondbacks before entertaining the Phils were 59-67, but they were also on a three-game winning streak. And now they have been victorious in eight of their last 10 contests, plus they had just won three straight last year before the red pinstripes played them. So, expecting a sweep is celebrating before pitch one.

For now, the Phillies are experiencing a rough patch, which is better than having one in September’s final two weeks. Realistically, it’s better happening now than the final 18 battles including six against the Atlanta Braves. And the Fightins, barring a total collapse, will make the postseason. No, no 1964 here.

In 2019, the only current players on the red pinstripes were Aaron Nola, Zach Eflin, Seranthony Dominguez on the IL (injured list), David Robertson (IL), rookie Ranger Suarez (reliever), Bryce Harper, JT Realmuto, Rhys Hoskins and Jean Segura. And they went 9-8 in the second half to July’s end: A .500 club doesn’t earn big spending.

Like 2019, the 2020 pen was on the IL except for Hector Neris, whose overuse led to disgruntled fans. He, at least, had Jose Alvarez in ’19. Moreover, newcomers were Zack Wheeler, Connor Brogdon and Alec Bohm, but they were 15-15 at August’s end. And many stars had no adrenaline rush with cardboard fans and prerecorded stadium noise.

Last summer, they were 51-53 on July 31 after going 7-9 in the second half. Despite injuries to Eflin and Hoskins, Dave Dombrowski, PBO (president of baseball operations), added Kyle Gibson to new faces Jose Alvarado, Sam Coonrod and Bailey Falter. Plus Wheeler, Harper and Realmuto kept the Phils in the National League East race until the final week.

Unlike 2021, Harper and Segura are fresh, plus Realmuto and Harper aren’t suffering fatigue. These three and Wheeler had proven in ’21 they’re all-in and now by playing over .600 ball for three months, so Dombrowski acquired another closer, a fifth starter, and a defensive center fielder with offensive potential.

Basically, some will look at the Milwaukee Brewers rotation and the Phillies shortcomings to reach an incorrect conclusion. The Brew Crew, though, hasn’t played .500 ball since June 1, and the Cardinals are now first in the NL Central by 7.5 games. Moreover, Milwaukee traded Josh Hader from a then first-place team.

The Brewers just dropped a series to Arizona, and they’ve been heading in the wrong direction for over three months despite a then three-game divisional lead. In fact, they remind me of the ’19 Fightins by hanging around after they failed to earn management’s support for a stretch-drive run. After the Hader swap, though, it soured their clubhouse mood.

Phillies and Rivals Records through Sept. 5:

The San Diego Padres are an enigma, and they are a franchise fans would recommend assembling: Sign top-tier free agents, acquire top hurlers, deal prospects, and take on salary. However, they’ve been playing .500 ball for over three months. My best guess: They are a collection of stars not performing together as one unit.

For now, the Phils will either be the second or third wild card. And, barring a total meltdown, they’ll play three away battles in Atlanta, Queens or St. Louis. Against the Braves, the red pinstripes are 6-6 including a bullpen-game disaster (3-3 away). And they are 4-3 versus the Cards (2-2 away).

Realistically, they earned the execs support: spending $17 million AAV (average annual value) over the $230 million threshold. In 2021, the CBT (competitive-balance threshold) was $210 million AAV or $37 million AAV less than 2022’s outlay. But if you want .600 ball and big splashes, there was only one 2011.

The Phillies current rough patch could be a disguised blessing because they could end this cold spell and get hot at the perfect time. And while other NL organizations cool off with a divisional pennant or the first wild card, they may be vulnerable to a hard-charging squad. Me, I’ll enjoy the ride and won’t need worry beads. And you?