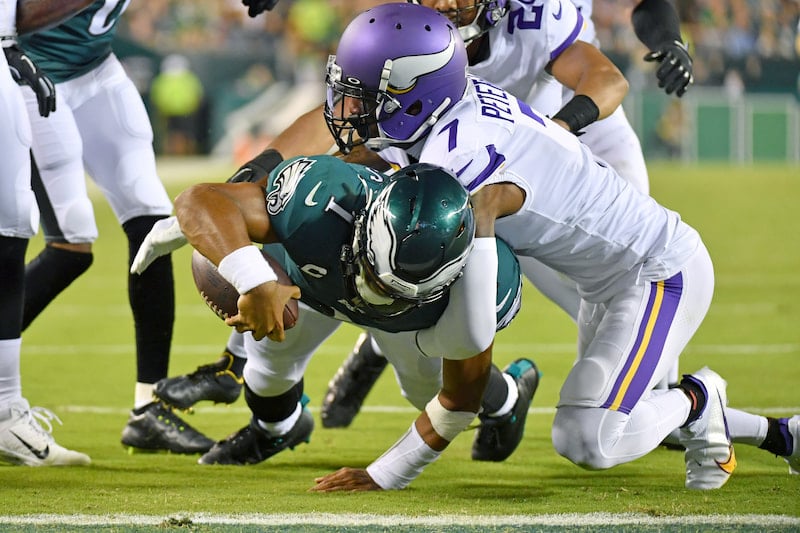 The Eagles entered this week without a loss following their win over the Lions in Week One.

They certainly came out swinging with perhaps the most impressive drive we’ve seen by Hurts since he’s joined the Eagles – and to start the game no less. The defense fed off of that and got a three and out of their own. It seemed to be all Philly until a bogus offensive PI call against the Birds ended their second drive where they should have converted a series where they 2nd and nearly 20.

One poor drive by the defense in the second quarter kept it within striking distance for the Vikings at the half, but the Eagles were more than able to overcome their recent primetime woes.

Two third-quarter interceptions ensured that Minnesota could not close that gap and a run and short-pass-heavy offense ran out huge chunks of clock that never gave the Vikings a chance to make up that ground.

After a tough match against a surprisingly good Detroit Lions team, the Eagles get a dominant win against a team that is widely considered an easy pick for the playoffs and a top-10 or even top-5 team.

The first half of this game was perhaps the best performance of his Eagles career. 17/20 for 251 yards and a touchdown plus 50 yards on the ground with two impressive touchdown runs made this the most balanced he’s been in Philly, too. Not only that, but the ball was spread around with all of the Eagles’ top weapons getting involved (four receivers, Goedert, and all three running backs). It’s hard to follow-up a half like that and really the Eagles didn’t need him to as they switched to a clock-killing offense at the half and kept the ball on the ground with regularity. Perhaps the best sign in this game was how sharp Hurts was out of the gate. For the past two seasons, the most glaring issue with Hurts has seemed to be that he started so incredibly slow and took until the second half to really warm up and there were absolutely no signs of that Monday night. He did have an interception and you could argue that it’s on Hurts, but I’d say that’s more on Gainwell for what should have been an easy reception by him.

Slay was an early pick for this spot with his coverage on Justin Jefferson to keep one of the league’s best at bay much of the game. Some playing far off of Jefferson had me second-guessing that but at that point Big Play shut me back up with an interception to prevent the Vikings from scoring and taking any of the momentum. Then he did it again in the fourth quarter to keep the Vikings scoreless in the second half. There’s plenty of top receivers that the Birds will face going forward, but not who are in the league of Jefferson.