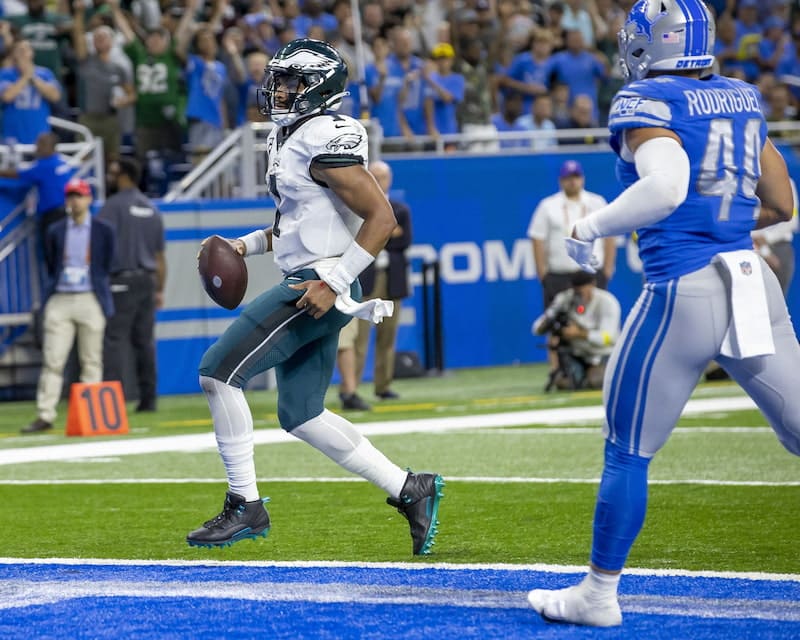 The start of the season certainly did not go as planned.

With such lofty expectations, there was certain to be concern when the Eagles defense allowed a 77-yard touchdown drive which followed a missed tackle by James Bradberry springing an over 50-yard run. That was followed by a 0/5 throwing performance by Hurts on a turnover on downs.

Luckily, the offense clicked after the first drive. Quarterback Jalen Hurts was 18-for-32 for 243 yards through the air including 10 completions for 155 yards to WR A.J. Brown.  Like last season, the Eagles took to the ground to reach the end zone.  Four different Eagles rushers, Hurts, Miles Sanders, Kenneth Gainwell, and Boston Scott rushed for touchdowns to power the offensive scoring.  Sanders led the Eagles with 13 rushes for 96-yards, and a touchdown.

Defensively, it was a tale of quarters for the Eagles.  The first drive mentioned above was followed by two-and-a-half quarters of tremendous team defense.  Defensive coordinator Jonathan Gannon dialed up various blitzes and pressures that were reminiscent of late defensive coordinator Jim Johnson.  With a 17-point lead late in the third quarter it looked like the Eagles defense was going to cruise to a victory.

Looks can be deceving.

The Eagles allowed the Lions to score twice in the fourth quarter including an 11-play, 72-yard drive capped off by a 22-yard touchdown pass from Jared Goff to DJ Chark. A laugher was quickly a three-point game with just under four minutes remaining. The Eagles were unable to consistently get the Lions off the field.  Detroit converted 9-of-14 third down conversions and were 1-for-1 on fourth down. The Birds’ struggled with tackles in the open field and coverage downfield at times.

In the end, this was not like the beatdown the Eagles handed Detroit last season, but the end result is the same: The Eagles go 1-0 on Lions week.

Brown saw his first real action with the Eagles and was targeted constantly, almost to a fault. By the half, he had 128 yards on six catches, but no touchdowns even though he was probably worthy of two (just unable to break free on a great pass by Hurts and had to come back and slide to make the catch on a poor deep pass).

Epps had only one suspect tackle that I recall in this match-up but had quite a handful of plays where he wasn’t anywhere near the play and made an incredible read that allowed him to break on the play and get near the ball. He made plays in the backfield, got his hands (and body) in the way of some receivers, and did a good job as an enforcer on the back end. It would seem that, if he can play like this throughout the season, he should be in store for a few of his own turnovers.