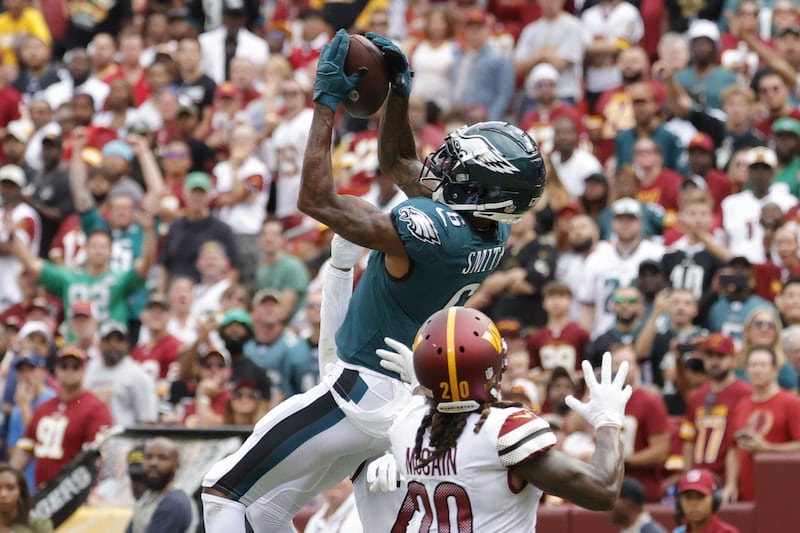 The undefeated Eagles, with wins over the Lions and the Vikings, came more than ready to play on the defensive side of the ball in this one to secure the team’s third win of the season.

Looking to take advantage of the issues former-Eagle Carson Wentz has holding onto the ball, an issue that Eagles fans and players know all to well, the front four feasted early on with four sacks in the first quarter alone. Sacks and tackles for loss were coming to the team regularly, especially when a fifth rusher was added to the mix.

The offense was a different story. A questionable catch (which the Eagles offense successfully hurried up to prevent review of) lead to the Eagles getting down the field where they stalled for just a field goal. Otherwise, the Commanders keyed on Hurts running and Hurts did a poor job throwing, throwing into coverage and forcing the receivers to play defensive back themselves rather than throwing the receiver open by throwing to the outside or deeper.

While Hurts didn’t improve to the level of his performance last week, he did gradually improve in the second quarter while the defense maintained the pressure to put the team in position to win at the half. He barely got a chance to throw in the conservative offense that was on the field in the second-half, however.

The second half really mirrored last week – the offense was terribly conservative and so drives went nowhere. The defensive play calling really took it’s foot off the gas at times and allowed Washington to move the chains. At least the defense did bring pressure occasionally in that quarter, something the offense never did.

Despite the offensive struggles, however, that one 24-point quarter was all that the Eagles defense needed to pull out the win, limiting Washington to 8 points and leaving Carson Wentz and his crew in a state of embarrassment.

The Eagles advance to 3-0 to remain undefeated. With Kansas City losing to the Colts and one of the Bills or Dolphins having to lose (or at least tie today) the Eagles are in increasingly little company in that regard. Also remaining undefeated, at least for now, are the Giants (MNF) and the Buccaneers (4:25 game).

Hurts was not particularly sharp to start today, but Smith did what he could to help him out and keep the offense moving. Of course, he had that deep questionable catch to setup the team’s first points, but also two incredible high-points to setup the Birds at the one-yard line and then catch the touchdown to end the first half. He wound up with 169 yards and a touchdown on eight catches in this contest.

While Fletcher Cox and Josh Sweat also feasted on Wentz today, but it was Graham that managed the most tackles (six) and forced a fumble that setup the Eagles first touchdown of the game. He also registered a team-high 2.5 sacks. Graham is a player who it feels like many fans have written off because of his age following basically an entire season that was lost to injury, but he was incredibly productive again this week and figures to continue to be as long as the Eagles rotate him enough to keep him fresh throughout the year.