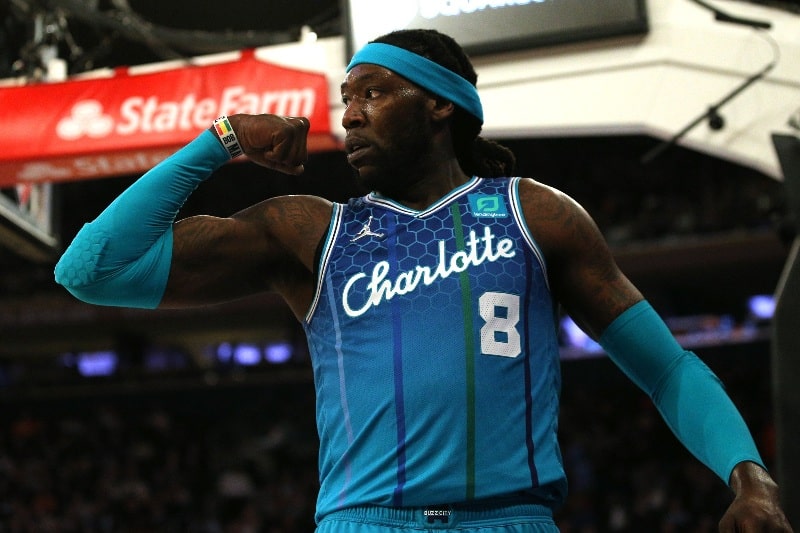 With just a few weeks remaining before training camp begins, the Philadelphia 76ers added another player onto the roster. According to Adrian Wojnarowski of ESPN, the team is signing Montrezl Harrell to a two-year contract which includes a player option.

Harrell played in 71 games between his time with the Washington Wizards and Charlotte Hornets last season. He averaged 13.1 points and 6.1 rebounds in 23.1 minutes per game.

Here are some pros, cons and where this signing leaves the roster moving forward:

Positives Harrell brings to the Sixers:

Harrell will immediately be able to come in and eat up some minutes as the Sixers’ backup center when Joel Embiid is off the floor. He is a good scorer, averaging 15.4 points while shooting 61.2% from the field over his last four seasons.

He also excels at rolling to the basket, something that should result in him being a good fit playing next to James Harden. The duo previously played with each other on the Houston Rockets in the 2015-16 and 2016-17 seasons. Harrell’s role offensively can be optimized when playing with a point guard who can successfully operate the pick-and-roll. Harden is one of the best in the league at doing just that.

The Sixers’ lack of toughness last season was well documented. President of basketball operations Daryl Morey did a solid job of correcting that area throughout the offseason. The Harrell addition is yet another move adding more toughness and grit to the roster. The 28-year-old has a history of playing a physical, in-your-face brand of basketball.

Overall, Harrell possesses multiple beneficial qualities that should help improve the Sixers. He will undoubtedly be able to come in and help the Sixers win games in the regular season.

Negatives of the Harrell signing

Harrell has a prior connection with head coach Doc Rivers, which would seem like a good thing on paper. He had the best season of his career, winning Sixth Man of the Year in the 2019-20 season with the Los Angeles Clippers. He averaged 18.6 points and 7.1 rebounds per game in that campaign.

However, the last time Rivers and Harrell were on the same team things went downhill. Rivers’ desire to play Harrell, according to a report from Jovan Buha of The Athletic, played a big role in the coach’s departure from the Clippers after the 2019-20 season:

“Two philosophical points of contention between Rivers and the organization were, more recently, his insistence on playing backup center Montrezl Harrell over starting center Ivica Zubac and, at large, his reluctance to develop or empower the team’s younger talent throughout his tenure.”

Sound familiar? Rivers continues to have an issue with putting too much confidence in veteran players (see: De’Andre Jordan’s tenure with the Sixers last season). There is a chance this repeats itself with Harrell in Philadelphia.

Harrell is a proven good regular-season player, his career plus-minus per 100 possessions in the regular season is plus-3.2. However, teams pick on his non-existent defensive abilities once the playoffs arrive. His plus-minus per 100 possessions through 30 career playoff games drops to minus-16.9. Harrell can be a productive, beneficial player in the regular season. The question remains will Rivers rely on him too much in the playoffs? The history points towards yes, with potentially disastrous results.

Also, Harrell is recently coming off some trouble away from the court. On August 31, Harrell had a felony charge of marijuana trafficking reduced to a misdemeanor possession charge. He reportedly pleaded guilty to the misdemeanor charge, which will then be expunged from his record after 12 months if he gets into no further legal trouble. Having his sentence be reduced should result in his availability for this coming season not being impacted.

The Harrell signing also likely indicates the end, or at the very least diminishing, of Paul Reed’s and Charles Bassey’s chances at locking down the backup center spot in the rotation. Reed and Bassey have both put together solid performances in the brief opportunities given to them over the last few seasons. It is disappointing to see the team pass over giving them a real shot at winning a consistent spot in the rotation this season.

Where does this leave the Sixers roster moving forward?

The Harrell signing puts the Sixers roster at 17 players. The team will have to trim down to 15 players before the beginning of the regular season. It will be interesting to see how Morey elects to trim down the roster. He could do it via trade or by outright releasing two players from the roster.

In terms of the salary cap, Harrell has a $2.463 million cap hit for this coming season, leaving the team with $918,639 in room under the luxury tax apron.

*All cap numbers are from spotrac.com unless otherwise noted*