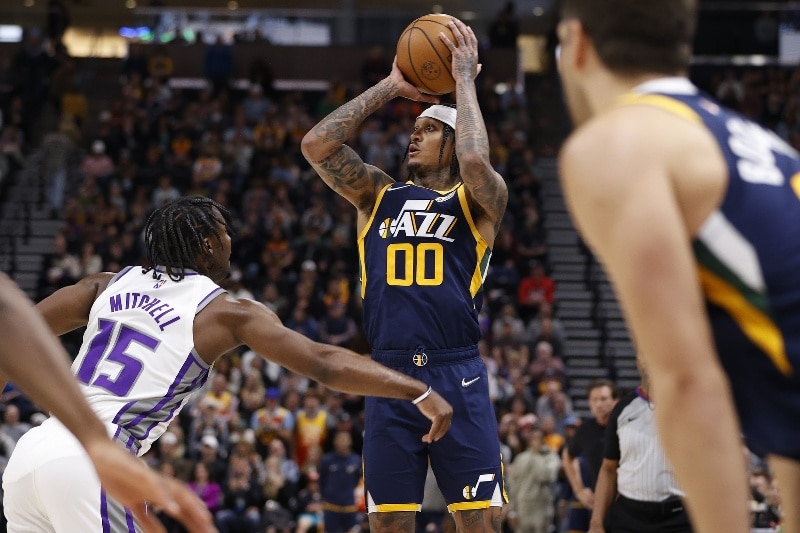 The Cleveland Cavaliers sent shockwaves throughout the NBA late Thursday afternoon when they pulled off a trade with the Utah Jazz for star Donovan Mitchell. The trade further propelled an already young, exciting Cavaliers squad towards the top of the Eastern Conference. The ripple effects of this blockbuster trade will surely be felt in the weeks and months to come.

How does the Mitchell trade affect the Philadelphia 76ers? It undoubtedly puts the Cavaliers among the top teams in the Eastern Conference. In addition, the Jazz are moving into a full rebuild, and the Sixers should look to take advantage. According to Adrian Wojnarowski of ESPN, Utah “plans to continue talks on unloading veterans, including Bojan Bogdanovic, Jordan Clarkson and Mike Conley.”

Of the three veteran players mentioned above, Clarkson would be the likeliest option for the Sixers. He is a microwave scorer off the bench, averaging 16 points per game for the Jazz last season. He is more of a high-volume, low-efficiency scorer, shooting just 41.9% from the field and 31.8% from three-point range last season. While he does have a quick trigger from beyond the arc (5.3 career attempts per game), he excels more as a slasher. He connected on 56% of his shots from around the rim last season. The 30-year-old is just one year removed from winning the Sixth Man of the Year award in the 2020-21 season. He averaged 18.4 points per game while shooting 42.5% from the field and 34.7% from beyond the arc.

Clarkson would be a nice fit for the Sixers coming off the bench. He has the ability to play either of the guard positions. He can score in isolation, something the Sixers sorely need more of. His scoring ability gives him the potential to come off the bench and change the game on a dime. The Sixers have not had a bench player like that since Lou Williams back in the 2011-12 season.

Before jumping into the potential cost of a Clarkson trade, there are a few important things to note. The Sixers currently have 16 players on the roster and will need to trim that down to 15 before the start of the regular season. They are, according to Spotrac, also only $3.382 million below the $156.938 million luxury-tax apron. They can’t go over the luxury-tax apron until June 30, 2023. Clarkson has a cap hit of $13.34 million next season.

According to Bryan Toporek of Liberty Ballers and Forbes Sports, the Sixers, as a taxpaying team, can take back 125 percent of the salary they send out in any trade, plus $100,000. This would mean the Sixers would have to send out roughly $12 million in order to bring in Clarkson and still leave $1-2 million in breathing space under the apron.

One potential trade offer for Clarkson

The Utah Jazz, currently embarking on a rebuild, are looking to gather as much draft capital as possible. They have already amassed 15 first-round picks over the next seven drafts. The Sixers are not well equipped in this regard. Due to the Stepien Rule, the team is unable to trade a first-round pick until 2029.

With the Sixers not having an available first-round pick to trade until 2029, any potential package for Clarkson would have to include Matisse Thybulle. The 25-year-old is the Sixers’ best moveable trade asset. He has yet to make much improvements offensively, but he is one of the NBA’s top perimeter defenders.

The Sixers would also add in a few other bench pieces as well as one or two second-round picks. One potential offer could be Thybulle, Furkan Korkmaz, Isaiah Joe and a second-round pick in 2023. Would that offer work under the salary cap? If the Sixers sent out Thybulle ($4.379 million cap hit), Korkmaz ($5 million cap hit) and Joe ($1.8 million cap hit) they would be able to take back $14.1 million in salary. This offer would be successful under the salary cap. In this scenario, the Sixers would have just $1.2 million in space under the apron with one remaining roster spot.

This proposed offer is very likely the most the Sixers would be willing or able to give up for Clarkson. Regardless of whether the above offer would be enough to get Clarkson to Philadelphia, it is definitely worth a phone call from president of basketball operations Daryl Morey to Utah.