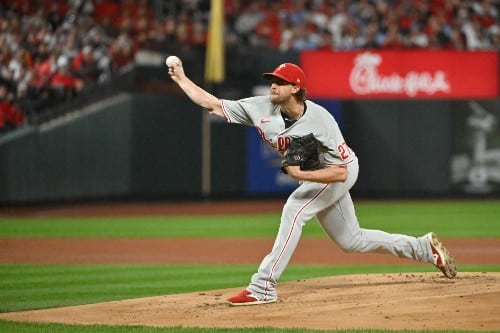 While the Philadelphia Phillies faithful had their misgivings dashed, the two stars who had the longest active streaks without a playoff appearance provided a miraculous stroke of good fortune. The Fightins, literally, caused the locals of baseball heaven to head early for the exits in Game One of the National League Wild Card Series.

Frequently, fans refer to the hunger some teams have because the majority are only postseason viewers. After the last five summers, though, jaded locals fear investing emotionally, unless the club powers through with coast-to-coast ease. But if you can’t wait a lifetime, what remains for you? Long-shot heroes, no?

“Champions are made from something they have deep inside of them –a desire, a dream, a vision.” – Mahatma Gandhi

Was it a coincidence the regular with 1,328 contests without a playoff appearance had the game-winning hit? Or was it fate that the star with 1,003 contests prior to a postseason battle started the victorious ninth-inning rally? Yes, Jean Segura and J.T. Realmuto respectively were those heroes.

Nothing begins until the starter throws pitch one, and Zack Wheeler only allowed two hits for 6⅓ scoreless frames. But as luck was neither good nor bad, there was no score after he fired 96 bullets following outings of 77 on Oct. 2 and 62 on Sept. 27. Translation: He’s the ace –not Gerrit Cole– the New York Yankees expected for $324 million.

When it comes to walk-off drama, Segura isn’t the hitter the opposition wants in the batter’s box. And he is playing with a champion’s fire, who fortunately is healthy and fresh: an unbeatable combination. In his mind, this may be his only shot at a ring, and he won’t regret a missed opportunity: guaranteed!

Realmuto has been the hottest star in the second half with a .307 average, 14 bombs and 46 RBIs. How, though, do I analyse those statics compared to his teammates? Well, the man is on an October mission, and he plans on making the most of his first brass-ring shot.

Skipper Rob Thomson had been in the Yankees organization for years, and he has introduced the Phillies to that winning philosophy. Apparently, he and his coaching staff have found success in what he calls the lab, and it’s impossible to argue with the results: 65-46 for a .586 mark or a 95-win clip. And keep in mind, this is his golden opportunity too.

David Robertson* has had successful playoff experience, and his first appearance met all expectations: a 1-2-3 inning with two punch outs. Realistically, he could be the go-to reliever if other late-frame arms struggle. And if he does, he’ll be the best trading-deadline acquisition by Dave Dombrowski, PBO (president of baseball operations).

Update: * He may miss the rest of the postseason due to a right calf strain.

Alec Bohm somehow took a hit by pitch without injury or sign of even a bruise in a postgame interview: dumb luck? Regardless, it was the first crack of six in the ice. Things then snowballed! So far, the young third sacker has two doubles, three free passes (one intentional) and is hitting .400 for the first two battles.

Aaron Nola twirled another gem in his first opportunity with 6 ⅔ scoreless frames, and now the Phils have a solid one-two punch atop the rotation. Yes, he’s gone from September’s question mark to a big-game stud, but he had assistance from management regarding his workload: extra rest here and there.

Who showed up with the game-winning hit propelling the red pinstripes to the NLDS? Yes, Bryce Harper found his timing with the Atlanta Braves as the next obstacle, and he’s a “red-light” player who shines on the bigger stages. And he also singled but didn’t get the call for a double. Guess whom the Braves supporters don’t want to get hot?

While Robertson had fired a clean inning in the first contest, Jose Alvarado redeemed himself in the second battle. And Seranthony Dominguez struck out both Paul Goldschmidt and Nolan Aranado consecutively. Readers, you thought the regular season made you a nervous wreck, but I had frequently foreshadowed the big –big– roller coaster ahead!

Basically, Thomson is going with Alvarado, Dominguez and Robertson as the bridge from the starter to likely closer Zach Eflin. And the righty is adjusting to a new role to make a huge contribution for the Phillies. Translation: A starter has better control than most relievers: He throws strikes.

How did the Fightins know Brandon Marsh, almost 25, wasn’t a .226 hitter? Unlike locals and writers –including me- they probably studied film of his swing and knew how to fix it: too many moving parts. Outcome: He batted .288 and is averaging .400 in the postseason. Ergo, Dombrowski picked up their center field fixture.

Granted, many regulars didn’t produce, but successful franchises have better pitching. And, unfortunately, most national scribes and media personalities didn’t even mention the red pinstripes as a possibility. In fact, some predicted the St. Louis Cardinals would win the NL pennant or reach the NLCS. Again, the Phillies will be underdogs in the NLDS.

The Fightins will play at least one game with Nola toeing the Bank’s slab. And while the fandom has time to exhale before the next battle, Atlanta hasn’t played since Oct. 5: A five-day layoff isn’t ideal. But keep in mind, you wanted the playoffs. So, Phils faithful, what’s the last of 14 road stops? The chop shop!

NEXT: Magic Beyond Numbers