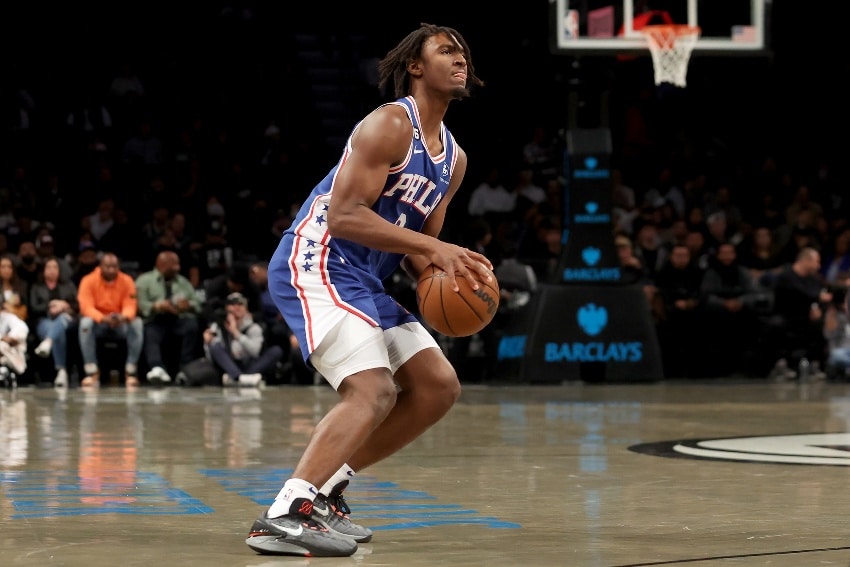 The Philadelphia 76ers opened up their four-game preseason slate with a 127-108 win over the Brooklyn Nets on Monday night.

The Sixers, by design, were not at full strength. Head coach Doc Rivers decided to rest Joel Embiid, James Harden and P.J. Tucker for the preseason opener. Danuel House Jr. also did not play, but that was due to neck stiffness.

Tyrese Maxey was the star of the show. He scored 20 points on 6-of-8 shooting to go with three assists in just 14 minutes of action. The team shut down Maxey as well as Tobias Harris and De’Anthony Melton after the first half. Furkan Korkmaz led the second unit with a balanced performance, finishing with 15 points and four assists.

The Nets trotted out their star trio of Kevin Durant, Kyrie Irving and Ben Simmons. Yes, Simmons made his unofficial debut in a Nets uniform against his former team. He received an ovation when introduced in front of the Barclays Center crowd, but was later booed when at the free-throw line by the segment of Sixers fans in the crowd. Simmons played 19 minutes, finishing with six points, four rebounds and five assists.

The Sixers’ next preseason game on the schedule is a Wednesday matchup with the Cleveland Cavaliers. Here are three observations from the win over the Nets.

In a game with Kevin Durant and Kyrie Irving, it was Maxey who often looked like the best player on the floor. He did not miss a step, lighting it up immediately with a pair of pull-up 3s. The 21-year-old, who finished the first quarter with a scorching 14 points, scored or assisted on 22 points in his first seven minutes of action.

Yes, it is only a preseason game. However, it was clear the work Maxey put in throughout the offseason helped him become a more well-rounded scorer. He scored in a variety of ways whether by knocking down pull-up 3s, fadeaway mid-range shots or crafty finishes around the basket. He showed good command of the offense on a night when both Embiid and Harden were not in the lineup. His quickness allows him to push the ball up the floor, and he showed some improvement against Brooklyn at drawing fouls once he gets to the rim.

The entire Sixers offense lit up the scoreboard early on, scoring 42 points on 53.8% shooting from the field and 57.1% (8 of 14) from beyond the arc in the opening quarter of action. The offense went through some rough stretches, but ultimately they pulled through when they needed to.

There is one word to describe this pair of backup centers: Chaos. Montrezl Harrell and Paul Reed, who started tonight for Embiid, played with a ton of energy while ultimately wreaking havoc when on the court.

Harrell immediately showed why the Sixers brought him in this offseason. He scored 10 points on 3-of-5 shooting from the field in 12 minutes coming off the bench. His impact offensively as a scorer off the bench is huge for a second unit which often lacked a go-to scorer last season. His effort hitting the glass, he grabbed five rebounds (four on the offensive glass), is also going to be crucial for the second unit. He also is not afraid to battle inside on both ends of the floor, which at times can be to his detriment. While he can make a big impact when out on the floor, he needs to avoid getting into foul trouble like he did when he fouled out against the Nets.

For Reed, he put together a clean performance in which he showcased a variety of positives. He scored 10 points on 3-of-4 shooting to go with five rebounds, three steals and a block in 20 minutes of action. The defensive chaos he creates when on the floor is huge, especially if he can avoid getting into foul trouble. While that was an issue for him last season, he only committed three fouls in the preseason opener.

The Sixers have made keeping Embiid healthy and fresh throughout the season a priority in recent years. The combination of Harrell, Reed and maybe some Tucker in small-ball lineups should be more than enough at backup center to allow the team to survive on the occasional Embiid night off for either rest or injury.

Defense was one of the team’s main focuses throughout training camp. The results through one preseason game were great. The team recorded 20 steals, led by three apiece from Reed, Melton and Matisse Thybulle.

The Thybulle-Melton duo has the chance to make things tough for opposing offenses when they are on the court together. Both of them have the length to disrupt the passing lanes like they did against the Nets. There are some concerns, namely whether or not Thybulle can make the offensive progression necessary to stay on the floor. His jumper looked more smooth, and he showcased it by knocking down a 3-pointer with a defender closing in on him in the first quarter. However, those were his only points of the night.

Melton struggled offensively against the Nets, turning the ball over three times and shooting a paltry 2-of-10 from the field. However, he has proven throughout his career to be a solid producer offensively so his performance on that end against Brooklyn can be chalked up to one bad game in the preseason.

The Sixers also have a few potential defensive contributors further down the rotation. Jaden Springer finished with two blocks and Julian Champagnie recorded two steals. Springer, a first-round selection in the 2021 NBA Draft, flashes a lot of defensive potential but has not yet made the jump offensively. Champagnie, signed to a two-way contract, is more of a project for the Sixers. In addition to his two blocks, he scored 15 points and grabbed six rebounds.

The Sixers have the pieces necessary to be one of the league’s best defenses. They showed some of that potential against the Nets in the preseason opener. The next step is to carry their focus and intensity on defense into the regular season.