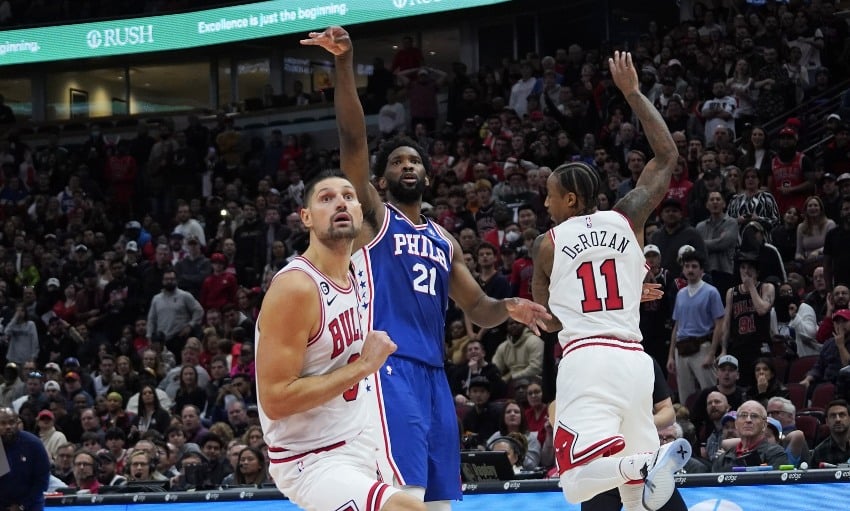 Things can never quite be easy with this team. The Philadelphia 76ers, behind a game-winning 3-pointer from Joel Embiid, survived to beat the Chicago Bulls 114-109 on Saturday at the United Center.

Embiid finished with 25 points on 9-of-15 shooting to go with seven rebounds and four assists. James Harden added in 15 points, six rebounds and 11 assists.

The Sixers won both games of their back-to-back with Toronto and Chicago. They now sit at 3-4 on the season. Their next matchup is on Monday against the Washington Wizards. Here are three observations from the win.

Sixers get off to fast start behind balanced scoring effort

After getting off to a slow start to the season, the Sixers looked like they were beginning to get into a rhythm. The team built up a 13-5 lead in the game’s opening four minutes, with all of the starters getting into the scoring column.

Embiid broke the ice, scoring the first points of the game on a finger roll layup. He did not show any rust after missing the previous game against the Toronto Raptors. The Sixers made a concerted effort to use the two-man game between Embiid and Harden. The results were, as usual, excellent. By the time the two subbed out for the first time with 2:44 remaining in the first quarter, Embiid had eight points and Harden had five assists. The Bulls had no answer, and the Sixers held a 26-15 lead.

The Sixers’ offense is nearly impossible to stop when they have the Embiid-Harden two-man game going like they did against Chicago. Harden, while having a poor night shooting the ball, was excellent orchestrating the offense in the first half. He showed patience operating the two-man game. His passing ability showcased itself on a full-court, touchdown pass to Tobias Harris for a layup with 8:01 remaining in the first quarter. Harden assisted on three of the team’s first five baskets and totaled eight assists in the first half.

Things came easily for the Sixers’ through much of the first half. They went into halftime shooting 53.3% from the field and 50% from 3-point range. Harris executed his role to perfection in the first half, knocking down three of his four attempts from beyond the arc. However, he disappeared in the second half, knocking down his lone shot attempt.

P.J. Tucker put together one of his better performances of the season. He scored 11 points in the first half, including draining a pair of 3s from the corner. He also set up a Tyrese Maxey 3-pointer in the first quarter with a hammer screen. Foul trouble and turnovers plagued him in the second half, but his first-half performance was exactly the type of play the team expected from him this season.

Bench beginning to produce as expected

While the Sixers bench has not played very well so far this season, their performance was much improved against the Bulls. Head coach Doc Rivers, for the second consecutive game, went to Matisse Thybulle as the first player off the bench. Maxey picked up two quick fouls, so Thybulle came into the game with 8:01 remaining in the first quarter. He had a quiet night, finishing with two points and a steal in 20 minutes.

All-bench lineups are not usually a recipe for success in the NBA. However, the Sixers went to the well for the final few minutes of the first quarter. With 2:44 remaining in the opening quarter, the team had the lineup of De’Anthony Melton, Shake Milton, Thybulle, Georges Niang and Montrezl Harrell on the floor. The all-bench unit outscored Chicago 11-7 in the final few minutes of the first quarter. Melton and Niang connected on 3-pointers on back-to-back possessions. Milton had a nice driving finish at the rim. Harrell forced a turnover from Vucevic. Melton then capped the quarter off with a pull-up 3 that got the Sixers bench on their feet. The Sixers’ all-bench unit was able to expand the team’s lead to 37-22 going into the second quarter. The bench as a whole scored 23 points on 9-of-20 shooting in the first half.

The Sixers received contributions from all throughout the roster against Chicago. Melton continued to become more comfortable with his role on the team. He finished with 10 points, three rebounds, four assists, one steal and one block. He excels at using his long arms both on the glass and defensively. Javonte Green thought he had an open dunk in the third quarter, but Melton used his length to come from behind and pin the ball up against the backboard. He is a perfect fit for the Sixers coming off the bench as someone who can produce on both ends of the floor.

Harrell seems to have locked down the backup center minutes, at least for the time being. He had arguably his best game of the season, playing with aggression in the paint and crashing the glass hard. His three offensive rebounds led the team. What came as a surprise from Harrell’s performance was his defensive effort. He drew a pair of charges early in the fourth quarter, and he came close to drawing another one in the third quarter.

A big reason for the team’s improved bench performance against Chicago was Niang’s red hot 3-point shooting. Niang finished the game with 15 points, including knocking down three of his four attempts from beyond the arc. He is also beginning to show his ability, at times, to score in ways outside of his 3-point shooting. Harrell found him on a cut to the basket early in the second quarter, and Niang finished with a crafty reverse layup. He is a streaky shooter, making it important for him to produce in other areas in order to consistently see the floor.

One of the team’s offseason additions that has thus far not panned out is Danuel House Jr. Over the last two games, much of his minutes have instead gone to Thybulle. House Jr. on paper is a solid bench player, someone who can knock down 3s and play a bit of defense. However, he has not produced much offensively and has underwhelmed defensively. He played only 10 minutes against Chicago, tallying a made 3-pointer, a turnover and a foul.

Things were going well for the Sixers for much of the first half. However, Chicago ended the first half on a 21-10 run. The Bulls began to get hot from beyond the arc, and the Sixers offense showed some signs of stagnating.

The Sixers’ slow end of the first half carried over as Chicago’s momentum continued to build. Nicola Vucevic buried three triples in the opening 3:39 of the third quarter. LaVine’s finger roll layup with 7:18 remaining in the third quarter tied the game at 72 as Chicago effectively eliminated what was at one point a 19-point lead for the Sixers.

The Bulls, after a pull-up jumper from DeRozan, were able to get a five-point lead with 4:15 remaining in the third quarter. At that point, the Bulls had gone on a 46-22 run that began with 5:42 remaining in the second quarter.

However, Maxey, who played just seven minutes in the first half due to being in foul trouble, did his best to kickstart the Sixers. He stole the ball away from Coby White and proceeded to make a tough and-one layup over Vucevic. The Sixers went on to take the lead back, 85-83 with 1:01 remaining in the third quarter, on a Maxey floater. With Harden having a brutal night shooting (he shot just 2 of 13), the Sixers started having Maxey run the half-court offense more often in the second half. Maxey finished with 14 points, five rebounds and three assists.

The Sixers, after their success offensively in the first half, spent most of the second half reverting back to being a sluggish offense. Eleven of their 17 turnovers came in the second half, but they were able to eke out the win anyway. With the game tied at 109 and under a minute remaining, Embiid missed a pair of free throws. However, he redeemed himself by drilling a pick-and-pop 3-pointer with 18.1 seconds remaining that wound up being the game-winner.