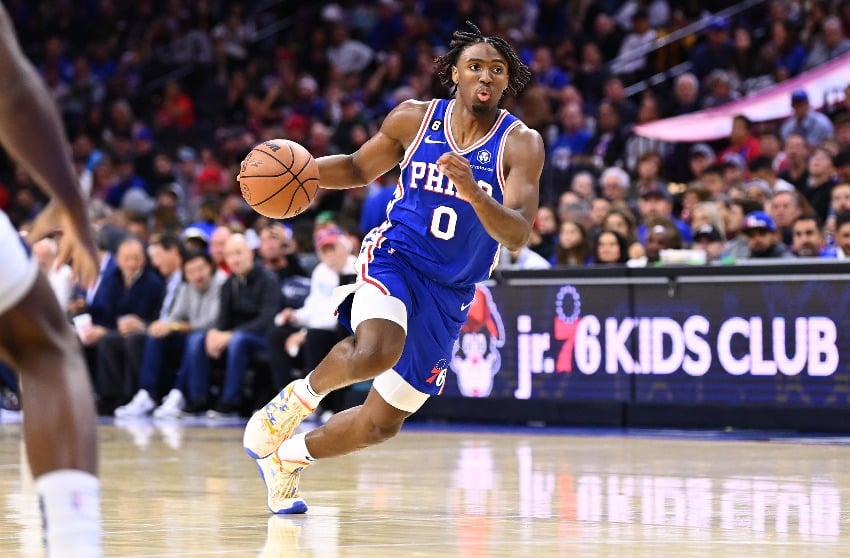 The Philadelphia 76ers opened up their two-game miniseries against the Toronto Raptors with a 119-109 loss on Wednesday. The Sixers now sit at 1-4 through their first five games of the season.

De’Anthony Melton came into the game questionable with right adductor tightness, but he was available.

Gary Trent Jr. led the Raptors with 27 points on 11-of-16 shooting. Pascal Siakam added 20 points, five rebounds and 13 assists. Toronto was without Otto Porter Jr. (left hamstring strain). Scottie Barnes did play despite coming into the game questionable with a right ankle sprain.

The Sixers wrap up this miniseries against Toronto on Friday. Here are three observations from the loss.

The Raptors usually do a good job finding ways to make it tough for Embiid to succeed offensively. Toronto plays with a smaller lineup without a typical center. They came out of the gate attempting to have Barnes defend Embiid, and the big man had his way.

Embiid got into the scoring column with 1:18 into the action, knocking down a turnaround jumper out of the post. He followed that up just over a minute later with an aggressive drive and finish at the rim. His first stint, in which he scored 11 points on perfect 5-of-5 shooting, was capped off by a strong slam dunk off the feed from Harden. It was one of his better stretches of play so far this season. He looked to take advantage of his size, aggressively looking to score whenever possible.

The Sixers subbed Embiid out with 4:19 remaining in the first quarter. Montrezl Harrell received the backup center minutes in the first half and did not have an impact. He missed a pair of free throws and grabbed a rebound in four minutes. It was a questionable decision by head coach Doc Rivers to go with Harrell over Paul Reed, the better defensive player, in this matchup. Reed did get a few minutes in the second half. While he did not show up in the box score (outside of committing a foul), he brought some grit to a defense that was in desperate need of some. Rivers playing Harrell in the first half and Reed in the second half, something he has done multiple times this season, is odd and is definitely something to pay attention to going forward.

Embiid had a quiet second quarter. However, he proceeded to do all he could to keep the Sixers in the game coming out of halftime. He scored the team’s first nine points of the second half, doing everything from knocking down a 3-pointer to continuing to attack the basket. He also had one of his better games in terms of handling the double teams, although for much of the night the team’s supporting cast failed to take advantage of their open shots.

This was the arguably Embiid’s best game of the season thus far. He was engaged offensively, often looking to establish deep post position regardless of which defender Toronto had on him. Whether it was the rival atmosphere in Toronto or the weaker defenders Toronto sent his way, Embiid clearly had things clicking right from the opening play. The Sixers offense has begun the season a bit out of sync, but receiving this type of performance from Embiid on a nightly basis should help get them back on track.

Atrocious defensive effort continues to be a problem

For a team that spent a lot of time talking before the season about wanting to be a top-10 defense, they sure are not showing it.

The Raptors victimized the Sixers from beyond the arc, with their first three baskets all coming from 3-point range. After Barnes opened up the scoring for Toronto, Siakam drilled a pair of 3s. He had the touch from outside regardless of whether it came as a pull-up jumper, off the dribble or as a catch-and-shoot.

The Sixers gave P.J. Tucker the defensive assignment of covering Siakam, and he was outmatched in all areas. The two jawed at each other often throughout the contest. Siakam had his way against Tucker both inside and outside the arc. Tucker, usually a sturdy defender, was bumped out of the way by Siakam on a finish around the basket early in the second half. It was Tucker’s worst performance of the season, salvaged only by shooting 2-of-5 from 3-point range. While Tucker can contribute in certain areas, this game showed that the Sixers need to add another good wing defender.

The Sixers’ effort at getting out and defending the 3-point line was atrocious against Toronto. The Raptors connected on seven of their first 12 attempts from beyond the arc. Both Siakam and Trent Jr. were able to set up from 3-point range like it was target practice. The Sixers were able to stick around within striking distance for much of the game. However, a Trent Jr. 3-pointer with 5:23 remaining extended Toronto’s lead to 106-93 and put the game away. The Raptors finished the game shooting 16-of-37 (43.2%) from beyond the arc.

Defense, specifically in transition, also continued to plague the Sixers. Efforts like the one exhibited on the play below are becoming a common occurrence for the Sixers early this season.

The Sixers gave up 29 fast-break points to the Raptors. The team too often shows a complete lack of effort coming back down the floor after a missed shot. There is not really an excuse for this lack of effort. The Sixers are hemorrhaging points right now whether it is because of a lack of effort, leaving wide open driving lanes or consistently getting caught watching the ball. Improving their defense needs to be a priority because as of this current moment they are one of the worst ones in the league.

Maxey was locked in right from the opening tip. Within the first minute of the game, he blocked a Fred VanVleet shot and sprinted down the floor for a layup. That play set the tone for what was going to be a strong night from the third-year guard.

He had his best game of the season, stepping into a bigger role in the offense and excelling. He played the entire second quarter, finishing with 12 points on 5-of-8 shooting. After getting off to a bit of a cold start to the season from 3-point range, he was back to hitting at a high clip. With 11:05 left in the second quarter, he connected on a catch-and-shoot 3-pointer. He connected on four of his eight attempts from beyond the arc.

Maxey’s court vision, speed and finishing ability, when combined with his outside shooting, present quite a tough combination to stop. He had multiple possessions where he saved a struggling Sixers offense with a nice drive to the basket. His ability to get out in transition is also the best on the team, and it is something the Sixers should look to use more often. Maxey had a brief injury scare midway through the third quarter, going down to the floor in pain after getting hit in the head on a fast-break layup. He wound up being fine and not missing any time.

Maxey has proven capable of being the second scoring option behind Embiid. The Sixers were able to stay competitive throughout most of the game due to strong efforts from both Embiid and Maxey as well as a strong second-half performance from Melton. Embiid and Maxey carried the Sixers’ offense for large stretches of the second half, although the team could not buy a stop defensively.

The few possessions they were able to generate some defensive momentum came largely because of Melton. He put together his best game in a Sixers uniform, finishing with 12 points, three rebounds, five assists and three steals. He used his length to be disruptive defensively. It is also clear he is getting more comfortable offensively, stepping into his shots and knocking them down with confidence.

Melton was one of the only players on the supporting cast to put together a good performance. Tucker and Tobias Harris combined to score 11 points on 4-of-15 shooting. The bench, outside of Melton, scored six points on 2-of-7 shooting. The Sixers will need more from players outside of Embiid, Harden and Maxey if they are going to consistently be able to win this season.