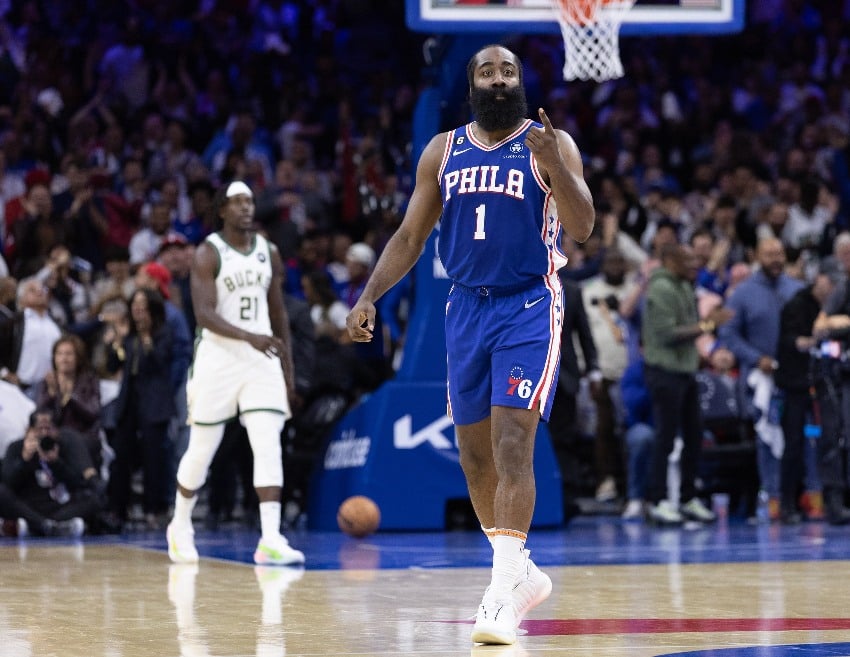 The Philadelphia 76ers, despite two great performances from James Harden, remain winless through two games this season. The team dropped their home opener to the Milwaukee Bucks 90-88 in front of a packed house at Wells Fargo Center.

Harden dominated, scoring 31 points on 13-of-24 shooting to go with eight rebounds and nine assists. He powered the team’s come-from-behind effort, but his off-balance runner with four seconds remaining did not find bottom and the effort ultimately fell short.

The Sixers next take on the San Antonio Spurs on Saturday in Philadelphia. Here are three observations from the loss.

Head coach Doc Rivers spoke pregame on the TNT telecast about making a more concerted effort to get Embiid the ball. The Sixers achieved that goal early on. They ran the two-man game between Embiid and Harden on their first possession of the game, resulting in an open shot Embiid knocked down from the elbow. On the following possession, Embiid drove to the basket and finished an and-one at the rim over Brook Lopez. A few possessions later, he tipped in a miss from Maxey.

However, defense was an issue for the Sixers early on. The Bucks built up an 18-11 lead with 6:52 remaining in the first quarter. Each member of their starting lineup scored. They successfully pushed the pace, scoring five early fast-break points. The Bucks opened up the game shooting 7-of-10 from the field and 3-of-5 from beyond the arc.

The Sixers gave the task of defending Antetokounmpo primarily to P.J. Tucker, having him trail him and mostly matching their minutes on the floor. He did an admirable job, especially at keeping Antetokounmpo from getting momentum going toward the basket. However, the Greek Freak was able to contribute in other areas of the game. He knocked down a 3-pointer in addition to drilling a 19-footer with Embiid’s hand in his face. Defensively, Antetokounmpo showcased his closing speed on a big block of a Tobias Harris dunk attempt at the rim.

The Sixers have had their fair share of defensive issues early on this season. Milwaukee picked them apart in the first quarter, scoring 30 points and shooting 57.1% from the field.

However, there were some signs throughout the night of an improved defensive effort and focus. They held the Bucks to just 17 points in the second quarter. Milwaukee shot just 35.6% from the field in the second half. Their defensive effort on Antetokounmpo, led by Tucker, was much improved from the times they faced him in prior years. He was rarely able to get open lanes to attack the basket as the team forced him to either look to spread the ball more around the floor or settle for jump shots.

This was the night Tucker endeared himself to the Philly faithful, showcasing his usual grit and intense activity level on both ends of the floor. He grabbed four offensive rebounds and was flying all over the floor diving for loose balls and generally leading the communication on defense.

The Sixers still had some defensive miscues, including in the biggest moment of the game. With the team up 88-86 and 32.9 seconds remaining, Harris overplayed the help defense on a Grayson Allen drive. This then freed up a wide open Wesley Matthews to receive the pass from Allen and drain a 3-pointer to give Milwaukee an 89-88 lead with 24.7 seconds remaining.

The pieces are definitely there for the Sixers to become a top-10 defense this season. However, it will take time to improve the chemistry and communication needed to be able to reach their ceiling on the defensive end.

Outside of the hot start from Embiid, the Sixers offense went through multiple stretches where they continued to look completely stagnant. There are far too many plays where the team relies on playing isolation basketball. Getting Maxey consistently involved also continued to be an issue. The team should look to take advantage of his speed in order to change the pace when both Embiid and Harden are on the floor.

Embiid had one of his worst performances in recent memory. He lacked his usual touch both from the mid-range and around the basket. Also, turnovers continued to be an issue, with him committing four of them. Through two games, he has looked out of sync on both ends of the floor. He has a history of getting off to slow starts, but the team will need him to quickly regain his dominant form in order for the offense to fully be able to click into gear.

The Bucks were beginning to pull away from the Sixers. They took a 75-63 lead after an Antetokounmpo layup with 11:04 remaining in the fourth quarter. The Sixers offense was ice cold, and the team had no momentum.

However, Harden began to step up and get hot. He drilled one of his career-high nine mid-range shots, a pull-up from 17 feet. On the following possession, he drew a foul and knocked down the pair of free throws. Those two possessions began a stretch where he propelled the Sixers to a 13-0 run that evened up the score at 80 with 6:42 remaining. During that run, Harden also got a steal while Tucker blocked a Jrue Holiday shot and then stole the ball from Holiday.

The entirety of the run came with a lineup of Harden and four wing players on the floor. The Harden-Tucker-Harris-Danuel House Jr.–De’Anthony Melton lineup worked wonders. Surrounding Harden on the floor with four wing players who can all space the floor should be something the team goes to more often throughout the season.

Harden scored 16 points on 7-of-12 shooting in the fourth quarter against the Bucks. He was dominant and was the sole reason why the Sixers had a chance to win the game coming down to the wire. He connected on a 16-foot pull-up jumper to give the Sixers an 86-84 lead with 1:43 remaining. However, he and the team ultimately fell short, his scoring through the first two is a great sign for the remainder of the season. What was most impressive about his performance against the Bucks was that he was scoring from all over the floor. He utilized his floater around the rim, and his mid-range pull-up game was absolutely devastating. Getting this kind of scoring production from him on a consistent basis would be huge for the Sixers.