3 Observations: Sixers Use Small-Ball Lineup, Maxey Continues to Excel in Win Over Cavs 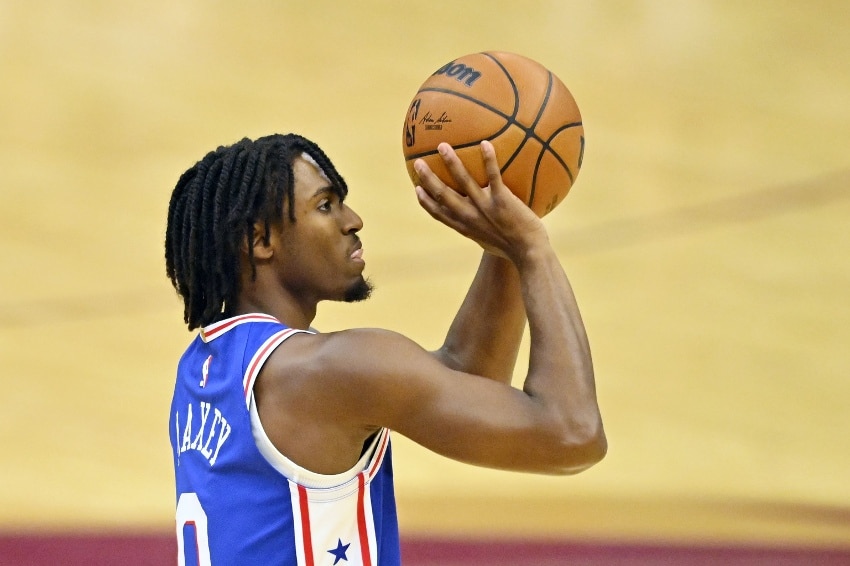 The Philadelphia 76ers moved to 3-0 this preseason, defeating the Cleveland Cavaliers 113-97 at Rocket Mortgage FieldHouse on Monday night.

Maxey stole the show, finishing with 19 points and continuing his hot start to the preseason. Harden added in 11 points, six rebounds and four assists.

Jarrett Allen led the Cavaliers with 19 points and 12 rebounds.

The Sixers wrap up their preseason slate with a home matchup with the Charlotte Hornets on Wednesday. Here are three observations from the win.

Small-ball lineup has a successful run

Running a small-ball lineup has been something Rivers talked about multiple times throughout training camp. They tested it out for the first time on Monday against the Cavaliers, to good results.

For much of the first quarter, the Cavaliers were adjusting to playing against the smaller, quicker lineup the Sixers put on the floor. The Cavs were held to just 20 points in the opening quarter, but they picked it up a bit in the second quarter, going into halftime with 50 points on the board. The Sixers small-ball lineup sprinkled in some zone defense in addition to rotating well defensively. The Cavs, at times, were able to take advantage of their size by getting the ball inside to Jarrett Allen. While the small-ball lineup can work well, it is vulnerable against bigger lineups like the one the Cavs have when Allen is on the floor. There are undoubtedly some kinks that need to be worked out, but overall the small-ball lineup fared well defensively.

The Sixers are not likely to utilize a small-ball lineup often, but it is a good option to have when necessary. On nights where Embiid is out, it can be added to a growing list of available possibilities for Rivers to utilize. Another option is to start Paul Reed, a player who continues to grow and get better each time he steps on the floor. He plays with a certain level of chaos and energy that can wreck opposing offenses. The 23-year-old has the defensive versatility to be able to step out and defend the perimeter either on switches, as he did a few times against Donovan Mitchell, or as part of defending the pick-and-roll. He finished with four points, three rebounds, two assists, three steals and three blocks in 18 minutes off the bench.

A final note on the team’s non-Embiid options at center: Charles Bassey, who was competing for one of the final roster spots, will likely not make it onto the final roster. On a night where Embiid and Harrell were both out, Bassey did not see any time on the floor. This is a likely sign of his days on the Sixers coming to an end.

While the results defensively from the small-ball lineup were mixed, offensively they were great. They blitzed the Cavaliers, taking a 33-20 lead into the second quarter. Playing with a three-guard lineup gives the team multiple options to utilize. They can push the pace with ease as they have multiple players who are capable of playing effectively in transition. They can slow things down and play a two-man game like they did at times with Harden and Tucker. Spreading the floor and utilizing the added quickness to attack the basket is also an option. It also helps when a single player carries the offense, which is what Maxey did in the first quarter.

Maxey once again got off to a red hot start, something he has done in each game this preseason. He drilled a trio of threes in the opening three minutes, scoring 11 of the Sixers’ first 14 points. Through three preseason games, Maxey is shooting 8-of-12 from 3-point range. It would not be a surprise at this stage to see him lead the league in 3-point percentage this season.

Having a young player like Maxey step up and make the rapid improvements he has made since the beginning of last season vastly changes things for the rest of the offense. At this point, he has likely jumped Harden to be the team’s go-to scorer next to Embiid. Harden no longer needs to be the consistent 25-points per game player he once was. He can instead focus on being a facilitator and attacking as a scorer when the opportunity arises. There will still be nights where Harden goes for 25 or 30 points, but the team no longer needs that from him on a consistent basis.

Harris has also had to adapt to being the team’s fourth scoring option. He now occupies more of a floor spacer role in this offense. Give him credit as he has shown he is putting in the work to maximize that role. Having a quick trigger from beyond the arc is something he has worked on, and it showed against the Cavaliers. He attempted seven shots from 3-point range. While only two of them found the bottom of the net, he should continue to pull the trigger with confidence.

One of the more underrated offseason moves for the Sixers was the trade bringing Melton to Philadelphia. He can impact the game in every area, and he showed that against Cleveland by filling up the stat sheet. In 21 minutes, he finished with seven points, six rebounds and five assists.

The Sixers included him in the small-ball starting lineup they ran out, and Melton produced immediate results. He pushed the pace, resulting in a some easy buckets to help get the offense into rhythm. He has the ball vision, passing and creation abilities to be able to run the offense in a pinch. There was one play early in the second half where he executed a perfect bounce pass along the baseline to an open Harris, who knocked down the 3-pointer from the corner. Plays like that are proof of his versatile game.

He can be the scrappy glue guy for this Sixers roster, someone who is capable of putting together an all-around performance and impacting the game on both ends of the floor. He can shoot from outside, has the court vision to run an offense and has the defensive abilities to be one of the team’s better perimeter defenders. Adding more depth and two-way players was a priority for the Sixers this offseason, and Melton perfectly fits the bill.

The Sixers, in the course of one offseason, went from having one of the worst bench units in the league to having solid depth at every level. Danuel House Jr., another one of the team’s offseason additions, can play on both ends of the floor. He finished with 10 points on perfect 4-of-4 shooting to go with two rebounds and two steals. Shake Milton continued to build on his strong preseason, compiling an all-around stat line of 10 points, five rebounds and four assists. Players like Furkan Korkmaz and Georges Niang, who the team previously relied upon for significant minutes off the bench, are now able to be better utilized in their respective roles. The improved bench will go a long way towards helping the Sixers better compete for a championship this season.