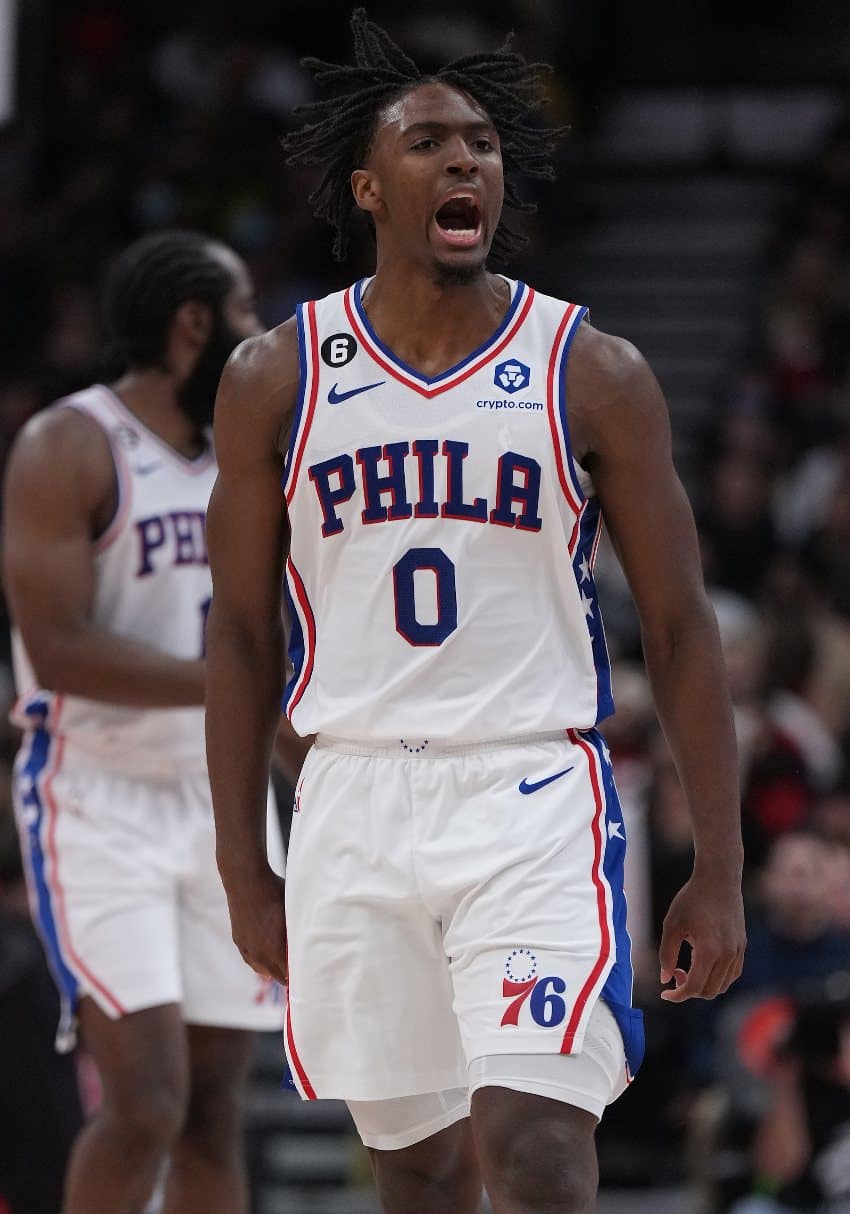 Tyrese Maxey. The kid lit up the scoreboard and the Toronto Raptors on Friday night. He scored a career-high 44 points on red-hot 15-of-20 shooting from the field and 9-of-12 shooting from 3-point range. The nine made 3s were also a career high. The Philadelphia 76ers rode him to a 112-90 victory over the Raptors, splitting the two-game miniseries and moving to 2-4 on the season.

Joel Embiid missed this contest against Toronto due to injury recovery – right knee soreness. There is a lot of speculation that the team held him out due to this game being the first half of a back-to-back.

The Raptors were without Otto Porter Jr. due to personal reasons. Pascal Siakam led the way for them with 26 points, 10 rebounds and six assists.

The Sixers take on the Chicago Bulls on Saturday in the second half of a back-to-back. Here are three observations from the win.

Maxey dominates up in Toronto

It was clear from the first time he touched the ball that Maxey was going to have a big night. In a night full of shots he had no business making, his first bucket came on an end-of-the-shot-clock heave from the corner. He would go on to score 12 points on perfect 4-of-4 from 3-point range, matching the entire Toronto Raptors output through the game’s first 5:31 of action.

When a player gets as hot as Maxey did, it makes the game of basketball so much easier. The Sixers rode the hot hand. Maxey dominated the offense in the first half, scoring 27 points on 10-of-10 shooting (7-of-7 from deep). He did not miss his first shot of the game until the 8:36 mark of the third quarter.

What was most impressive from Maxey’s performance is that it came within the flow of the offense. He was not forcing shots up. He made the pass when needed and contributed on the glass as well, leading the team with eight rebounds. His offensive performance was one of the more dominant ones in recent Sixers history.

The Sixers were able to ride Maxey for most of the game, although he did go through a brief cold stretch, shooting 1-of-5 in the third quarter. After playing with a lot of pace and ball movement in the first half, the offense bogged down and the shots stopped falling. Six of the Sixers’ 15 turnovers came in the third quarter. What was a 17-point lead at halftime was whittled down to six points with 2:35 remaining in the third quarter. However, the Sixers went on a 4-0 run to end the quarter, putting their lead back up to 11 points.

The Raptors were still within striking range, down 91-81 with 6:00 minutes remaining in the game. However, Maxey proceeded to go on a personal 10-0 run, including draining a pair of deep 3s to put the game away.

Maxey’s performance against Toronto was special to watch. The Sixers need to make a more concerted effort to run the offense through him more often.

The early results against Toronto proved to be a mixed bag. Tucker stole the ball off a bad pass from Siakam on the first play of the game. They forced two Toronto turnovers and held them to four points in the first 3:25 of action.

The Sixers’ communication and effort defensively were both the best they put forth so far this season. They forced 17 Toronto turnovers while holding them to 90 points on 38.4% shooting from the field. It is amazing what happens when effort is put in on that end of the floor.

Matisse Thybulle, who had not received significant minutes coming into this game, was the first man to come off the bench. He came into the game with 4:45 remaining in the first quarter. He took advantage, knocking down a pair of 3s in addition to making his typical impact defensively. Overall, he finished with six points, three rebounds, three assists, one steal and two blocks in 22 minutes. It was good to see Rivers give Thybulle the opportunity. Thybulle proved to be a change of pace to help spark the team’s struggling defense. However, it is unclear if Thybulle is going to receive consistent minutes moving forward or if the rotations were changed solely because Embiid was out of the lineup. He also still did not produce much offensively, and until he does he will likely not be a candidate for consistent minutes.

Montrezl Harrell backed up Tucker at center and had his best game of the season. Harrell contributed in multiple areas. He scored nine points on perfect 4-of-4 shooting while also grabbing two rebounds and dishing out two assists. He made a few plays that were uncharacteristic of him, including successfully pulling off a Eurostep finish around the basket and making a key block on an Anunoby dunk attempt in the fourth quarter.

De’Anthony Melton received the start at small forward as the Sixers’ lineup changed with Embiid out. He took advantage, putting together his best game in a Sixers uniform. When the team traded for him during the offseason, they expected to get a player who can impact the game on both ends of the floor while eating up a lot of minutes. His performance against Toronto showcased exactly that.

Melton did not have an efficient night shooting the basketball, but he made enough plays to still impact the game offensively. He was the beneficiary of James Harden’s excellent passing vision as Harden found him around the basket with crisp passes multiple times throughout the night. Five of his six made field goals came in the paint.

The biggest area of production from Melton came on the defensive end. He was a fiend, grabbing five steals while constantly harassing opposing ball handlers. Multiple of his steals came against Toronto forwards, showcasing both his ability to defend multiple positions and to be disruptive while coming over to play help defense.

Melton’s final stat line was evidence of how he impacted the game in every area. He finished with 13 points, five rebounds, six assists and five steals in 31 minutes. The Sixers, if they are to have a chance at competing for a championship this season, will need consistent contributions from players outside of Embiid, Harden and Maxey. It has become clear over the last three games that Melton is getting more comfortable and adjusted into his role for the Sixers. Him being able to produce anywhere near this level will be huge for the team’s chances this season.