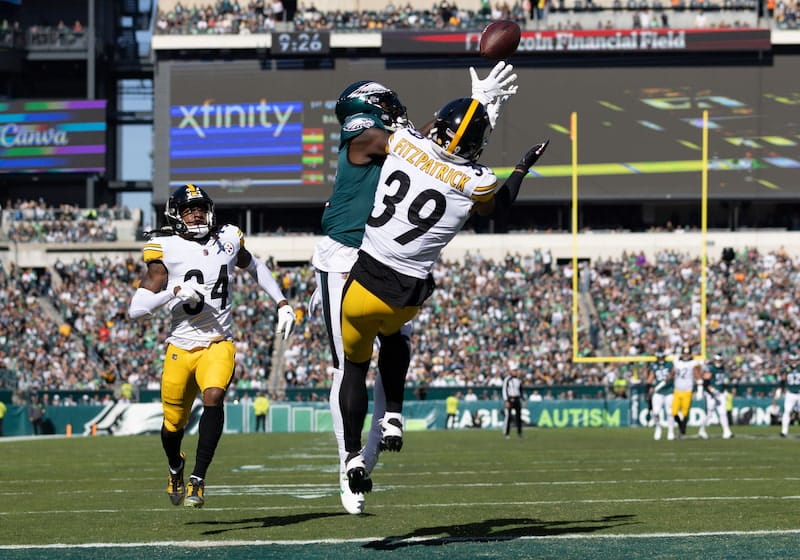 The Eagles have been on the back burner in Philadelphia as the lone undefeated team in the NFL had their bye last week. In the meantime, the Phillies have not only won the NLCS, but have begun their quest for their third World Series championship. With the series even at 1-1, the teams have an off day to travel to Philadelphia, a perfect time for the Eagles (and Union) to hop back to the front of the Philadelphia sports scene.

The Eagles, having already faced the top opponents on their schedule until week 12 or 14 (depending on if you consider Green Bay a good team or not), started off a weaker section of their schedule against the cross-state Pittsburgh Steelers and former Pitt QB Kenny Pickett. It could certainly be a trap game for a team riding so high and coming off the bye.

That may have been the hope of the Steelers, but it wasn’t so to start the game with the defense forcing a three and out and the offense having perhaps their hottest start of the season.

The defense had only one poor drive in the first half themselves and while they didn’t come away with any turnovers until late in the fourth quarter, they largely kept the Steelers from hitting pay dirt as the Eagles offense piled on.

On the flip side, the Eagles offense was strong to start the game and made some mistakes in the second quarter that slowed the scoring down a bit, but they actually came out after the half and not only killed a few minutes of clock with chunk runs, but put up a touchdown to start the second half and put points on again after that. It lead to a game where players such as Hurts, Sanders, Kelce, Brown, and Smith were all benched in order to prevent any injuries.

The trio of Gardner Minshew, Boston Scott, and Zach Pascal ran out the clock and sealed the victory for the Eagles, while players like Cam Jurgeons received some live NFL snaps that may come in handy later on this season or in his career.

The Eagles furthered their all-time lead in the cross-state rivalry, taking the series to 49–29–3. They will take on the Texans Thursday night, when fans will tune back into the Birds following three straight World Series games at Citizen’s Bank Park.

I mean, who else could it be? Brown was putting on a clinic deep downfield, embarrassing the Steelers defensive backs left and right. With three touchdown receptions in the first half alone, with two defensive backs on him two of those times, Brown put the Eagles ahead to an extent that the Steelers wouldn’t have come back from even after four full quarters of play. He wound up with 156 yards and three touchdowns on six catches.

In a game where Jordan Davis was lost to injury, Milton Williams was able to make his presence known and fill in admirably. He had just one tackle, but he had two of the most important plays for this defense: one sack to prevent a touchdown before the half and a tipped pass that may well have prevented another touchdown. His emergence as an effective pass rusher will be critical in easing the loss of Davis.