Eagles Escape Desert With Another Win 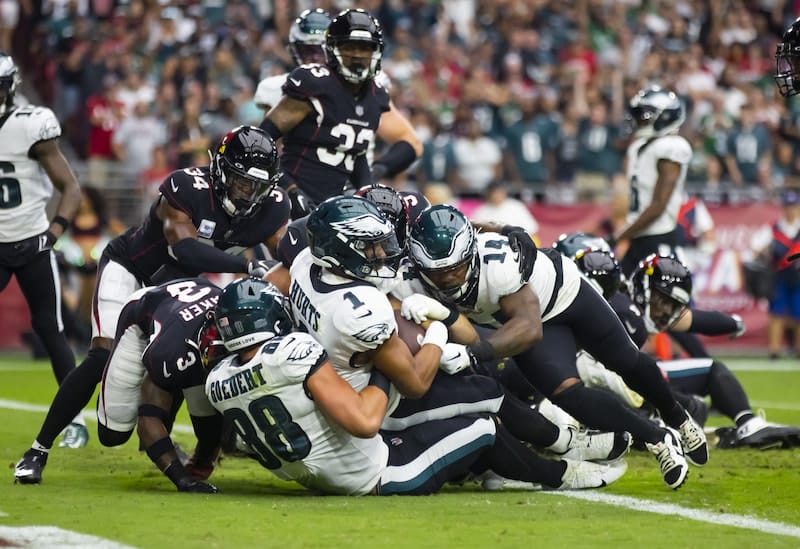 Oct 9, 2022; Glendale, Arizona, USA; Philadelphia Eagles quarterback Jalen Hurts (1) scores a touchdown with the help of tight end Dallas Goedert (88) and running back Kenneth Gainwell (14) against the Arizona Cardinals in the first half at State Farm Stadium.

With a win over the Jaguars last week, the Eagles entered this week as the only team in the NFL with an undefeated, 4-0 record. This week, they were looking to follow the same path as the Phillies did over the last two days by beating the Cardinals, though the Eagles target is of course in Arizona rather than St. Louis.

This was far from the Birds best game and the Eagles really seemed like they were just off in almost every department. It really seemed like no part of anything they were doing could really get humming. The offense would start for a drive (or half a drive) and the defense would do the same. Hurts would make poor decisions and the defense would suddenly forget to tackle. Play calls on both side would suddenly lead to no pressure on Murray or loss of yards on screens the Cardinals defense was sitting on.

There were at least 4 occasions where it really seemed like the Eagles should have put the game away. Instead, they seemed to shoot themselves in the foot over and over – in a different way each time.

In the end, Kyler Murray making a premature slide and a missed kick left the Cardinals 3 points shy of matching the Eagles and sending this one to overtime, allowing the Eagles to remain undefeated despite an ugly game.

There’s something to say about the success of the run game late to control the clock and keep the ball moving, but even on the Eagles final drive it was Goedert who came through when the run game (or in this case the unrelenting screen game) fell behind the chains, converting a third and 12 by getting half of the needed yards after the catch. He ended with eight catches for 95 yards and much of that was after the catch – Goedert was the only Eagles player seemingly unaffected by the Cardinals defense being keyed into that aspect all game.

While Epps didn’t show up much in the statistics of the game (4 tackles, one for loss, and a PBU), but he certainly appeared to be the rock of an defense that just disappeared at times. Epps made some hard hits, got in the way of passes, and made the tackles he needed to. In a game where the secondary was a sore spot, Epps stood out as the one player filling his role.