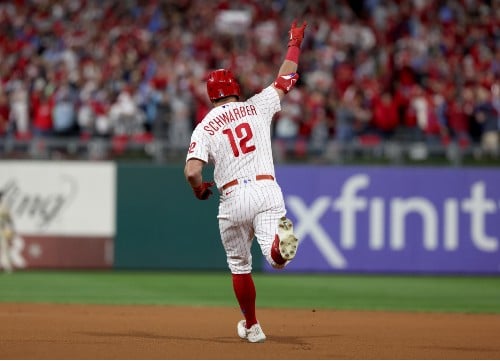 The Philadelphia Phillies used timely hitting and solid pitching to defeat the San Diego Padres 4-2 in Game 3 of the NLCS. The win gives Philadelphia a 2-1 series lead.

Philadelphia started the scoring early, literally. Kyle Schwarber led of the game for the Phillies and put one into the right-center seats. One batter, 1-0 Phillies. The Phils threatend to add more in the 1st but a timely double play was able to help Padres’ starter Joe Musgrove limit the damage.

From there things got, well, weird.

Phillies’ starter Ranger Suarez was locked in and looked to be rolling.  He started the 4th by hitting the struggling Juan Soto but followed it by getting Manny Machado to lineout to center field.  San Diego’s Brandon Drury followed with a single to right that moved Soto to third with one out.  Suarez seemingly was out of the inning but Jean Segura dropped a would-be double-play allowing Soto to score and tie the game.

The Phillies –as they’ve done all year– didn’t let the error keep them down.  Alec Bohm started the Phillies 4th inning rally with a two-out single to center field.  Bryson Stott followed with a double to right that put runners on second and third. Segura –who just made a costly error– followed with a tremendous at-bat and lined a single to right field to score Bohm and Stott and give the Phils a 3-1 lead.

The wheels really could’ve come off for the Phils in the San Diego half of the 5th.  Padres’ CF Trent Grisham hit a routine one-hopper to Rhys Hoskins who promptly booted the ball a la Bill Buckner. Grisham would come around to score on a Ha-Seong Kim ground out to bring the Padres back within a run.  Suarez was able to strikeout Soto to end the inning and limit the damage.

From there Phillies manager Rob Thomson began the bullpen shuffle.

Zach Eflin took the ball in the 6th and immediately forced Machado to ground out.  He followed by allowing back-to-back singles to Drury and Jake Cronenworth to put the potential tying run at third with one out.

San Diego pinch hitter Josh Bell ripped what looked like a hit off the bat, but Segura made a spectacular play to start an inning ending double play.  The Phillies flirted with disaster and avoided it.

The Phillies would lean on Jose Alvarado and Seranthony Dominguez to get the final nine outs of the game.

Alvarado pitched around a leadoff single by Jurickson Profar in the 7th.  The Phillies flame thrower was able to strike out Grisham, Austin Nola, and force Kim to ground out to get out of the inning.

Thomson chose to leave Alvarado in the game to start the 8th and face Soto.  The Padres deadline acquisition ripped a single to left field and San Diego brought the tying run to the plate with Manny Machado. The Phillies countered with the hard throwing Dominguez who struck out Machado and forced back-to-back lineouts from Drury and Cronenworth to end the inning.

In a surprise move, Dominguez stayed in to close out the game for the Phillies.  He allowed Bell to get on board with a single to center field and for the third consecutive inning the Padres brought the tying run to the plate.  Dominguez followed by striking out Profar –on a questionable check swing– for the first out of the inning.  Grisham popped a can of corn to Stott at short for the second out.  Dominguez ended the game by striking out Nola –the other Nola– with a nasty slider.

Dominguez became only the second Phillie to record a six out save in the postseason.  The other, Tug McGraw on October 21, 1980.  McGraw’s sixth out and final out that night 42-years ago, Kansas City’s Willie Wilson to win the Phillies first World Championship.
The win gives the Phillies a 2-to-1 series lead heading into a pivotal Game 4 on Saturday night at Citizens Bank Park.  The Phillies have announced Bailey Falter as their starter.  San Diego will counter with Mike Clevinger.  Both teams expect an “all hands on deck” type of atmosphere.

Baseball content on Sports Talk Philly is brought to you by BroadStBaseball.com.

Philly Born, Jersey Made. Rutgers Alum. Current editor of Philadelphia Phillies coverage on Sports Talk Philly. I provide fair, non-baised coverage of Philadelphia sports. No bullshit hot takes "for the fans by the fans" nonsense. Readers deserve better than that. I miss writers like Stan Hochman and Phil Jasner. Owner/Operator of BroadStBaseball.com
View All Posts By Michael Lipinski

Philly Born, Jersey Made. Rutgers Alum. Current editor of Philadelphia Phillies coverage on Sports Talk Philly. I provide fair, non-baised coverage of Philadelphia sports. No bullshit hot takes "for the fans by the fans" nonsense. Readers deserve better than that. I miss writers like Stan Hochman and Phil Jasner. Owner/Operator of BroadStBaseball.com
View All Posts By Michael Lipinski