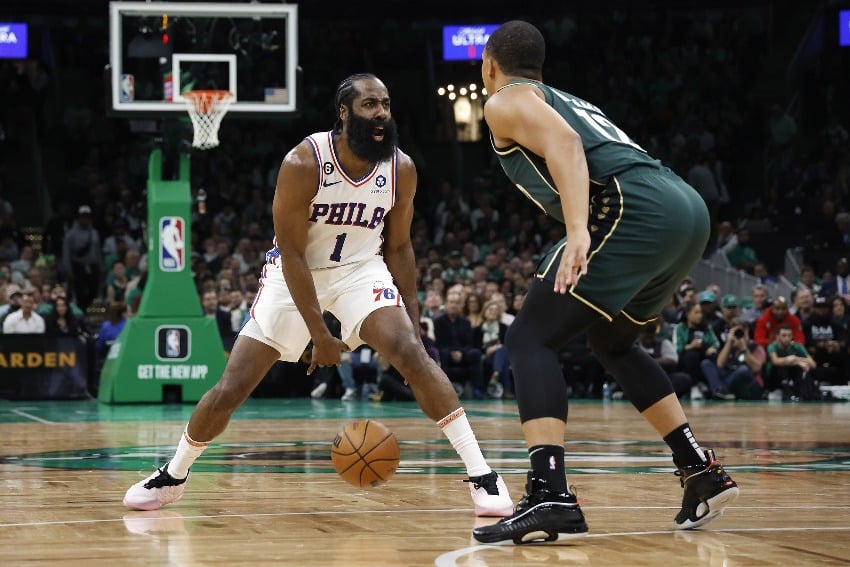 The Philadelphia 76ers are still looking for their first win of the season. Joel Embiid is off to a slow start. Also, the whispers of panic are already starting to show up among Sixers fans. However, not everything is trending in the wrong direction for the Sixers.

James Harden’s pair of strong performances to open up the season is by far the biggest thing to take away from the team’s first two games. He is averaging 33 points, eight rebounds and eight assists per game while shooting 57.9% from the field, 37.5% from 3-point range and 100% from the free-throw line.

Scoring 33 points per game is obviously impressive on its face. However, it only gets more impressive when taking into account the different ways he has looked to score this season.

He scored 35 points against the Boston Celtics, doing most of his damage either from beyond the arc or at the free-throw line. When his jumper is in rhythm, he can use his 3-point shooting to carry his offensive production. Against Boston, he shot 5-of-9 from beyond the arc as he used his lethal step-back 3s to power his performance.

The 3-pointer, as well as his excellent finishing ability around the basket, has been a big part of his game throughout the entirety of his career. However, he has now added more variety to his scoring repertoire.

It all started with Harden getting fully healthy from a hamstring injury which nagged at him for the previous two seasons. He went into some detail at the team’s media day in late September about the journey he went through both physically and mentally.

“Mentally it was very, very difficult for me, just because I’m in love with the game of basketball,” Harden said. “It was very difficult. A lot of tough times, a lot of dark moments, which I’ve never really went through [before]. I’m in a really good space right now, and I feel like I’m back to where I needed to be, and where I’m supposed to be. The feeling is great.”

Being fully healthy and in good shape heading into last offseason allowed Harden to spend time working on his game.

“I’m a workaholic,” Harden said after the loss to the Milwaukee Bucks. “So just not being able to put the work in like I normally do was frustrating. This summer I had the opportunity to and even up to this point, I feel really good. Just continue to put the work in and living with the results and that’s what I live by. A lot of people don’t see the work that I put in. This scoring ability and all this other stuff doesn’t come without work. As much as people wanna talk about all the other stuff that don’t really matter, I’m a workaholic. I love to be in the gym and I love to play basketball so I’ll continue to do that.”

The early results from all the work Harden put in during the offseason have been great. He came into the season in great shape physically, and it is clear he also added or refined different aspects to his game. It is clear the 33-year-old does not have the same level of explosiveness he once did. He can no longer consistently blow by defenders on drives to the basket. As a result, he added more to his bag of tricks as a scorer.

Against the Bucks, Harden finished with 31 points on 13-of-24 shooting from the field. He did not have his 3-pointer going, connecting on just one of his seven attempts from beyond the arc. However, he showcased his diversified scoring ability, using both his floater and a newfound mid-range arsenal.

Harden originally added the floater to his arsenal when he was still a member of the Houston Rockets in the 2018-19 season. During that season, 11.8% of his field goal attempts were classified as floaters, according to NBA.com. He connected on them at a 51.6% clip. His floater usage increased over the next two seasons, going all the way up to 21% of his total field goal attempts in the 2020-21 season. From the 2018-19 through 2020-21 seasons, he consistently shot above 50% on floaters.

However, something changed last season as both his usage and efficiency on floaters dipped. After his usage of the floater increased each season from 2018-19 through 2020-21, it declined from 21% to 17.1%. More worrisome was the dip in efficiency, dropping from 53.9% in the 2020-21 season to 42.9% last season. This decline could have potentially occurred due to a lack of explosiveness from his nagging hamstring injury. Whatever the case, the decline, at least for now, seems to be short lived.

Through the first two games this season, 23.7% of Harden’s field goal attempts were floaters. He is connecting on them at a 55.6% clip. While two games is obviously a small sample size, it is good to see the floater go back to being a highly-used, efficient part of his game.

An increased use of the floater can benefit Harden as he adjusts his game away from relying on finishing around the rim. On drives to the basket, defenders will have to worry about Harden utilizing the floater rather than just trying to burst around them to get a layup or draw a foul.

In addition to further utilizing the floater, Harden went to work in the offseason adding more of a mid-range game to his arsenal. Last season, he shot just 40.5% on field goal attempts from between 5-19 feet.

Through the first two games of the season, he is shooting 11-of-15 (73.3%) on shots between 5-19 feet. Both the rate and incredibly high efficiency are both not sustainable over a full season. However, it is still a huge positive step for Harden that he added a successful mid-range arsenal to his game.

The addition of both the floater and the mid-range game makes Harden that much more dangerous as a scorer. He used to be a player who mainly took 3s or drove to the basket. However, he now has added dimensions to his game for opposing defenses to worry about.

Moving forward, Harden’s success early on this season is something that can potentially raise the Sixers’ ceiling this season. Arguably the biggest question for the Sixers heading into this season was what version of Harden they will get. Through two games, they are getting a version very similar to the MVP levels he played with in Houston. While Embiid is struggling out of the gate, something he has a history of doing, he will eventually bounce back and start playing in the dominant manner he usually does.

Despite the 0-2 start to the season, now is not a time for fans to panic. Harden’s high level of play, combined with Embiid’s expected resurgence to the norm, has this team set up to be one of the top teams in the Eastern Conference this season.