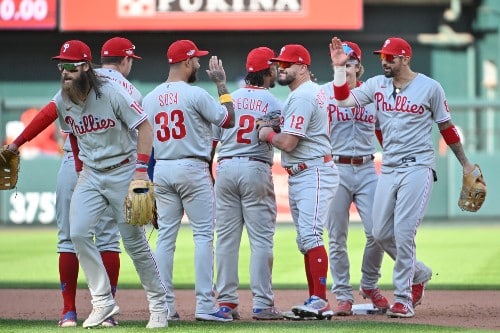 While most Philadelphia Phillies faithful and players are anticipating another deep postseason run, money and competition will, as usual, have a role in managements’ decision-making. Yes, Dave Dombrowski, PBO (president of baseball operations), is offensively leaning toward only adding a top shortstop and moving Bryson Stott to second base.

The Phillies will face the difficult task of reaching the World Series again because it’s not any easier the second time, even though Dombrowski will pick up a consistent bat with 20-homer power, a mid-rotation starter and two setup men. Despite managements’ intentions, though, they still need good health, luck, freshness, a realistic pace and 2022’s heart.

“Don’t expect anyone to give you anything. If you really believe in something, then fight for it.” – Damon Dash

When a five-man staff is fresh through October, a franchise can overcome a potent offense in the Fall Classic. But the old-school thinking of pitching every fifth day is –perhaps– the next improvement in an organizational approach. Ergo, you must outhit your opponent if your ace is on fumes in October. And too many are.

While the old-fashioned belief is a stud is either good or bad in September and the playoffs, those yardsticks are questionable except by old-school skippers. To illustrate, the Atlanta Braves switched to a six-man rotation in 2021’s second half and again won the National League East despite manager Brian Snitker’s doubts.

After going 44-45 in 2021’s first half, Atlanta with six starters went 44-28 after the All-Star break. And it was the determining factor for their postseason appearance, plus Snitker admitted it worked despite his initial misgivings. In the Braves case, though, it was more a workload issue than gassed hurlers.

Clubs have lengthened to a five-man staff over time, while the major leagues have gone from 16 to 30 franchises. Years ago, starters pitched through injuries for fear of losing their job: even aces. And since the strongest moundsmen could fire 300 innings, they were successful through October.

Eventually, more starters equaled more injuries and lost money, then owners realized working hurlers until they couldn’t throw was unprofitable. And the remedy was earlier detection and a quicker return of their pitching investment. So, when you’re talking millions instead of thousands, you have ownership’s attention.

Atop the rotation, Zack Wheeler has proven he can be at his best in September because of a 3-1 record with a 1.47 ERA for 30 2/3 frames and one of his best 2021 months. However, he missed four weeks before his recent playoff outings including his final solid performance. Translation: The red pinstripes don’t know how he would fare without that rest.

Aaron Nola went 2-2 with a 6.19 ERA for ’21 to 4-2 with a 1.80 ERA for September and through Oct. 16 recently. Why? The Phils managed his days off to prevent a September drop-off, and it worked even though they didn’t foresee going to the World Series. So, he had nothing left for his starts in San Diego and Houston.

Ranger Suarez was solid in September: 2-1 with a 3.14 ERA. Unfortunately, his final appearance in October was a clunker. But he went 2-0 with a 1.23 ERA during the postseason and proved he can perform on MLB’s biggest stage.

With Zach Eflin, Kyle Gibson and Noah Syndergaard on the free-agent market, the Fightins will compete for a three -or-four-slot arm. But don’t expect a top-tier stud for $30-45 million AAV (average annual value): Carlos Rodon, Justin Verlander or Jacob deGrom. Yes, eyeing the best moundsmen is normal, not realistic, unless you prefer disappointment.

The fifth spot is Bailey Falter’s to lose, and he currently isn’t one of four playoff starters. That stated, he earned a five-man slot with a 3.38 September-October ERA. Overall, he went 6-4 with a 3.86 ERA, and he proved he can handle a regular turn.

The first possibility for a sixth starter in July is Griff McGarry. And although he had produced a 1-3 Double-A mark with a 2.20 ERA, he relieved to a 9.00 Triple-A ERA with four acceptable performances out of seven. But making the red pinstripes’ pen in spring training could be a possibility leading to a second-half starting assignment.

Andrew Painter, 19, had advanced from Clearwater and Lakewood to Double-A last summer and had a 2.54 ERA in five outings with the Reading Fightin Phils. And if he can have first-half success at Triple-A, he could be the sixth arm for the Phillies rotation. However, each level means stronger competition, but can he bounce back if he faces adversity?

Although he is progressing at a normal pace, Mick Abel, 21, was 1-3 with a 3.52 Double-A ERA for five starts, which suggests he’ll open ’23 at Reading before earning a second-half promotion to Lehigh Valley. Barring a major change, though, pushing for more than a September call-up doesn’t appear realistic.

Even though hurlers run out of steam in September, stars do also. And you needn’t look any farther than the final week of 2021, when Bryce Harper and JT Realmuto had nothing left in the Atlanta Series because they had burned their energy just to be in that position. Basically, the rigors of baseball affected them.

I remember former president Bill Giles ripping catcher Darren Daulton for missing an All-Star week function. Yes, the star needed the four days to reinvigorate himself, but Giles saw Daulton the way many fans see regulars: They must perform at the highest level –always– regardless of their workload.

The New York Mets manager and the Braves skipper didn’t rest their players. For Atlanta, they didn’t replace regulars in one-sided games, and the Metropolitans had Francisco Lindor in 161 contests and Pete Alonso in 160 battles. Yes, both organizations had fought hard to capture the NL East, but the Fightins won the NL pennant.

The expectation for an ace is to dominate through October without considering age and weariness. In fact, many label Verlander, Clayton Kershaw and now Nola as playoff disappointments. Even Steve Carlton went 0-2 with a 3.86 ERA in 1981’s postseason, when he was 36 near his career’s end.

Even though Realmuto has above-average endurance, he proved the days off during the Toronto series and the All-Star break increased his production. Plus Nola only came up two games short of the finish line. But if the Phils added a sixth arm in the second half, the entire staff would be more effective.

The NL playoffs exposed the lack of rotational depth even if clubs have a healthy five-man staff. Yes, the loss of Eflin left the red pinstripes one starter short: a bullpen game in the Fall Classic. And if the Phillies process the numbers, what conclusion should they eventually reach for the stretch drive? A six-man rotation!