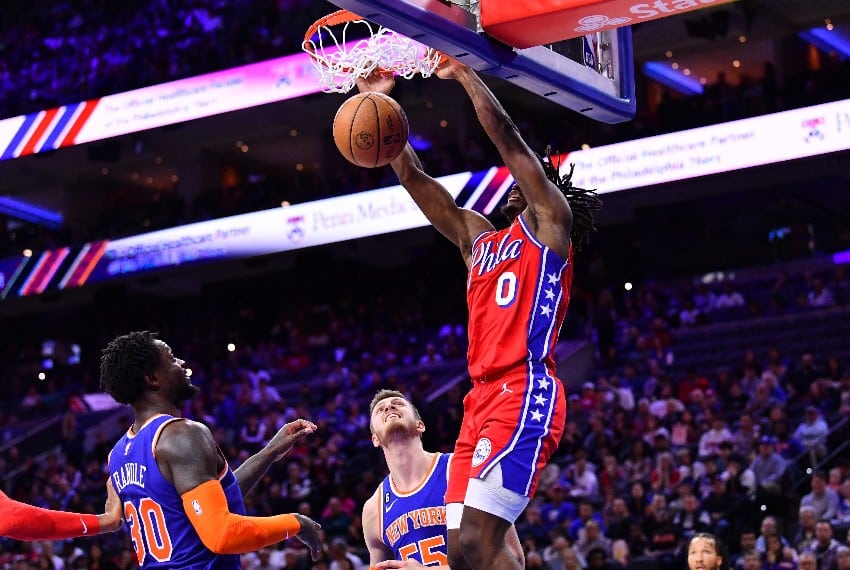 The Philadelphia 76ers had a chance to win the game in the final seconds, but De’Anthony Melton could not knock down the game-winner. The Sixers lost their second consecutive game, falling to the New York Knicks 106-104 on Friday at the Wells Fargo Center.

The Sixers went into this matchup undermanned. They were without their top two players in James Harden (right foot tendon strain) and Joel Embiid (non-COVID illness). Embiid has now missed three straight games, although he did go out in warmups in an effort to see if he could play before eventually being ruled out.

The Sixers, now 4-6 on the season, have the weekend off before hosting the Phoenix Suns on Monday night. Here are three observations from the loss.

With both Harden and Embiid out of the lineup, the Sixers came into the game needing strong efforts from the remainder of the “big four.” Both Harris and Maxey stepped up in the early going.

Harris, after getting switched onto Julius Randle in the post, knocked the ball out of his grasp on the Knicks’ opening possession. He then opened up the scoring with a step-back jumper from just inside the three-point line. He also scored on the following possession. His next few shots did not go in. However, the more important thing to take away is his aggressiveness in looking for his own shots. Through the opening couple weeks of the season, his play has not been the greatest. However, he has mostly done a solid job adjusting to his role as more of a floor spacer.

Maxey also got involved early, drawing a few fouls and consistently looking to push the pace in transition. His first points of the game came on a three-pointer with 9:21 remaining in the first quarter. While he has become an excellent marksman from beyond the arc, the 21-year-old is also learning how to impact the game in other ways. His speed is something he can easily utilize in transition, but he is also beginning to change speeds when driving to the basket. He scored nine points in the first quarter despite knocking down only one of his three attempts from three-point range.

Things were not pretty early on, but the Sixers held a 22-21 lead after the opening quarter of action. Maxey and Harris combined to score 16 of the team’s 22 first-quarter points.

Maxey checked back into the game with 9:10 remaining in the second quarter. After shuffling his feet and committing a turnover, he connected on his second three-pointer of the game. He then did a solid job dishing the ball around, assisting on three consecutive Sixers’ made field goals. His changing speed, something he perhaps learned from the master foul drawer Harden, was showcased on a play midway through the second quarter. He got past Cam Reddish on a drive to the basket before slowing down and drawing the foul as Reddish crashed into his back.

With the Sixers down 66-59 and 9:03 left to play in the third quarter, Maxey got onto a hot streak to lift the team back into the game. He powered a personal 10-0 Sixers run, beginning with a two-hand dunk after driving past Isaiah Hartenstein. He connected on multiple step-back jumpers during the run. The shots were not always falling for Maxey, but credit to him for continuing to fire them up with confidence. Harris and Maxey both played nearly the entirety of the third quarter. Harris finished the quarter with seven points, three rebounds and two blocks. He quietly put his imprint on the game throughout.

Maxey did a fair job leading the undermanned Sixers for much of the game. Although he struggled mightily in the fourth quarter. He scored four points and connected on just one of his seven attempts from the field in the final frame. With the Sixers down by two points in the final 30 seconds, he badly missed a three-pointer that would have given the team a one-point lead. The Sixers’ future is in good hands with Maxey despite his fourth-quarter struggles against the Knicks.

Depth will get tested as Sixers deal with Harden’s absence

The Sixers’ depth is going to be tested throughout the next month as Harden recovers from a right foot tendon strain. Melton, who excelled in a pair of spot starts this season, received the start in Harden’s stead. However, head coach Doc Rivers said before the game the team is not going to necessarily use the same starting lineup the entire month Harden is out.

Melton continued to play at a high level for the Sixers. He picked up a lot of the playmaking void left from Harden’s injury, dishing out six assists while committing just one turnover in the first half. His shot was not falling for much of the night, but he has the versatility to still be able to make an impact in multiple other areas. He finished with 12 points, five rebounds, nine assists, two steals and two blocks.

Montrezl Harrell received the start at center with Embiid out of the lineup, and he was very active offensively. He did not provide much through the first quarter and a half outside of a pair of dunks. However, he scored six points in the final 3:05 of the first half. His biggest play of the night was an and-one layup in transition off a beautiful pass from Melton midway through the third quarter. Despite his offensive contributions, he still struggled defensively. Until he improves defensively, he will remain a flawed player that opposing teams can take advantage of when on the floor.

The Sixers also received a ton of production from Paul Reed at backup center. He continues to impress with every opportunity given to him. While he does not provide much offensively on most nights, his defensive contributions are far and away enough to warrant him receiving consistent minutes. He totaled a career-high six steals along with two blocks and four rebounds off the bench.

The remainder of the Sixers bench did not produce much. Matisse Thybulle came into the night questionable with a right ankle sprain. He finished with four points, three rebounds, one steal and one block in 13 minutes off the bench. Georges Niang finished with three points and three rebounds. He struggled from beyond the arc (2-of-7), and he just does not produce much on nights where his shot is not falling. Shake Milton, outside of scoring four points at the end of the third quarter, had a quiet night. Furkan Korkmaz had an unimpressive 11 minutes off the bench, finishing with three points, two rebounds and an assist. Danuel House Jr. was out of the lineup with a non-COVID illness.

The Sixers had to dig deeper into their bench due to all the players they were missing against the Knicks. The bench did not produce much, totaling 21 points on 9-of-25 shooting from the field. The team will have to get more production from their bench moving forward as Harden misses the next month of action.

It was an ugly night offensively for the Sixers. They shot just 37.8% from the field and 27.7% from beyond the arc. However, the opportunities were still there throughout the night for the Sixers to take advantage of.

Despite their struggles defending the rim, the Sixers still were in position to win the game. A Melton three-pointer with 6:57 remaining gave the Sixers a 91-81 lead. However, the Sixers self-destructed in the game’s final minutes. Obi Toppin scored 13 points for the Knicks in the fourth quarter, including a monster three-pointer that gave the Knicks a 97-96 lead with 1:27 remaining. On the next possession, the Sixers turned the ball over. Maxey sailed a pass over Harris and out of bounds. It was one of the six turnovers the Sixers committed in the fourth quarter.

Rivers made the questionable decision, with 1:45 remaining, to run a lineup out there with both Harrell and Reed on the floor. The results were poor as the Knicks scored on every possession in the 40 seconds the lineup was out there. Experimenting with that lineup is fine in and of itself. However, to do it in crunch time of a close game just did not make any sense.

After some free throws due to intentional fouling and a big three-pointer from Niang, the Sixers found themselves down 105-104 with 9.1 seconds remaining. They fouled Brunson, who then missed the first free throw before drilling the second. In a night of missed opportunities, the Sixers had their final one with a chance to win the game. Maxey ran down the floor and drove the basket before getting stonewalled. He dished it to Melton who badly missed a three-pointer with 3.3 seconds remaining that sealed the loss for the Sixers.