3 Observations: Undermanned Sixers fall to Porzingis and the Wizards 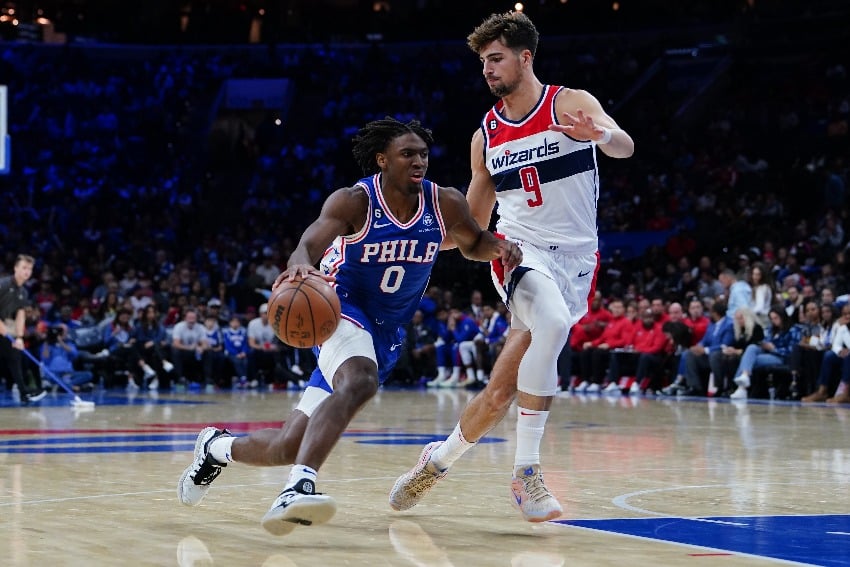 The Philadelphia 76ers lost to the Washington Wizards in the second of back-to-back meetings by a final score of 121-111. The Sixers were once again without Joel Embiid due to a non-covid illness. De’Anthony Melton was also out with lower back stiffness, forcing the Sixers into some unusual lineups.

Tyrese Maxey carried the load for the Sixers offensively scoring 32 points on 11-of-20 shooting. James Harden finished with yet another double-double scoring 24 points to go along with 10 assists. Despite the efforts of the Sixers backcourt, it ultimately wasn’t enough.

Kristaps Porzingis and Bradley Beal led the way for the Wizards, combining for 59 of the team’s points. Washington was without Corey Kispert (left ankle sprain) and Delon Wright (right hamstring strain).

The Sixers had an opportunity to go over .500 for the first time, but the loss has them falling to 4-5 on the season. Their next matchup is on Friday at home against the New York Knicks. Here are three observations from the loss.

Joel Embiid is still the Sixers’ most important player

Embiid has gotten off to a “rough” start, at least for his standards, averaging 27.5 points and nine rebounds through six games. The Sixers were undefeated in games that he hadn’t played in before last night’s loss, leading some fans to think that we do not need him anymore. However, the Wizards exposed and took advantage of what the Sixers lack without Embiid on the floor: interior defense.

The 7-foot-3 Porzingis, along with the rest of the Wizards team, had a field day scoring in the paint. They finished the game with 68 points in the paint and shot 57.7% from the field overall. This is not to say that the Sixers didn’t show any effort defending the paint, but their small-ball lineup just couldn’t keep up with the Wizards height.

With Embiid in the lineup, this game looks very different. Beal will likely still get his as he can score from anywhere. However, it is highly unlikely that Porzingis drops 30 on Embiid. Forcing the Wizards to shoot the ball from outside the paint puts them in a situation that they aren’t comfortable in. While it’s impossible to say whether they would have won or not, he at least would have made a big difference in the Wizards methods of scoring.

Paul Reed entered the game in the second quarter after the Wizards scored 30 of their first 47 points in the paint. He made an immediate impact. On his second offensive possession, he had an offensive rebound that he then kicked out to Harden for a 3-pointer. He was credited with an offensive rebound and an assist for that play. The next possession he jammed home his first bucket of the season off of a pass from Matisse Thybulle. Thybulle left the game early in the second half with what head coach Doc Rivers said after the game was an ankle injury.

After Reed checked into the game in the second quarter, Porzingis only had three points to end the half. The Sixers as a whole cut the lead down from 10 points to six with Reed in the game. Despite this performance, Reed was nowhere to be seen for the rest of the game. Playing just six minutes, he had the same amount of rebounds (two) and more assists (one) than P.J. Tucker did in his 28 minutes.

Rivers made a mistake not putting Reed in earlier. He then compounded that mistake by not playing him for the entire second half. This is yet another example of why fans want Rivers gone so badly.

Tyrese Maxey should be the No. 2 option

Going into the season it was expected that Harden would be the second scoring option and Maxey would be the third. Even to start this season this proved to be true and effective. However, the games without Embiid have shown how efficient of a scorer Maxey is. In three games without Embiid this season, Maxey is averaging 34.6 points on 61% shooting from the field and 59% shooting from beyond the arc.

If Maxey got more looks last night he could’ve easily had another 40-point performance. He started off the third quarter hot, scoring seven straight points by himself. He would then score just two buckets in the last 10 minutes of the quarter. It seemed like every time Maxey touched the ball, something good happened. Unfortunately, he wasn’t getting nearly as many looks as he should have been getting. With Embiid out, he should have complete freedom to do what he wants, especially if he’s as hot as he has been. He seems to give the ball up too early when he could take it himself and at least draw a foul.

As of right now, the 21-year-old is second on the team in scoring, averaging 24.2 points per game. Maxey has taken yet another jump in his game and should land himself in some most improved conversations once again.

View All Posts By Hunter Simpson

View All Posts By Hunter Simpson