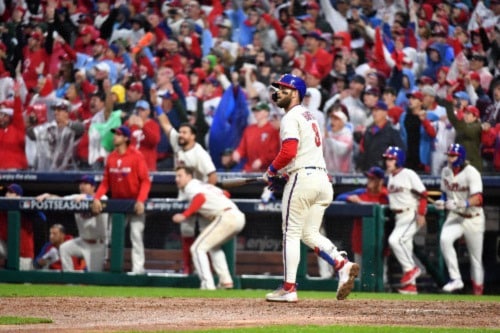 Before the hot stove league even gets warm, the Philadelphia Phillies faithful have already decided on the stars they want. Unfortunately, some players attract more interest than others, but a superstar isn’t a necessity to plug a hole for an additional $6.5 million AAV (average annual value), when the club needs a solid up-the-middle glove with a .300 bat.

A simplistic method before signing a solid shortstop could be a $300 million contract or the star with the best statistics. However, other considerations depend on the competition and the cost to construct the best team overall. But the Phillies, also, need a mid-rotation arm, two backend firemen, and $10 million for the trading deadline.

“I’m not concentrating or concerned with any other factors rather than just being able to do the best job that I can.” – Benigno Aquino III

For some fans living in an instant world, Dave Dombrowski, PBO (president of baseball operations), and other front offices must complete their offseason before Dec. 1. Or locals panic! But acquiring talent in a trade or a free-agent signing is not a one-sided proposition. It’s a negotiation where both parties must find agreement.

While some locals convince themselves a superstar and an ace will be Phils for ’23, they risk disappointment because the Fightins have four holes to plug with $58.8 million AAV and must set aside $10 million for July’s end. Therefore, they can ink a star shortstop, a starter and bullpen pieces: They don’t need to overspend on the best.

Other general managers may have interest in the same players, and some will add a year or exceed the asking price to sign one. Sometimes, the Fightins will go in another direction rather than overpay if other regulars are available. But keep in mind, there’s no guarantee of a player’s health and success.

Realistically, PBO Dombrowski wants a .300 hitter with some pop and an elite defender. The red pinstripes, also, need a fourth playoff starter to join the five-man staff with Zack Wheeler, Aaron Nola and Ranger Suarez. Plus moving on are Corey Knebel, Brad Hand and David Robertson; so, the PBO needs at least one strong backend reliever.

Although there is concern about Bryce Harper’s absence, he has the determination to return sooner than mid-July. To illustrate, Shohei Ohtani in 2018 had undergone Tommy John Surgery on Oct.1 but was the DH for the Los Angeles Angels the following May 7. By that timeline, Harper’s Nov. 23 procedure could have him in the lineup on June 15.

The DH spot will alternate between Darick Hall, Nick Castellanos, Kyle Schwarber, Rhys Hoskins and Alec Bohm. Basically, skipper Rob Thomson and Dombrowski realize players need some time off to stay fresh and be productive in September and October. And, yes, the New York Mets and Atlanta Braves were on fumes in September but not the Fightins.

Difference-wise, the four shortstops are two years apart agewise, hit .277 to .307, were 16 percent above average offensively to 40 percent, had 15 to 25 homers, 64 to 100 RBIs, two stars with stolen bases, and a cost differential of $154 million to $288 million. So, don’t expect Dombrowski to sign a $300 million superstar if the price increases to that.

Dansby Swanson hit .277 and his cost is $22 million AAV, but he doesn’t fit the Phillies description of a .300 hitting shortstop with solid glovework. Therefore, he would only be a backup plan at best if Atlanta doesn’t re-sign him. But eliminating Swanson from his strategy early on could have been the PBO’s first move.

Carlos Correa’s estimate is a nine-summer pact for $288 million, and he’ll have his pick of suitors, including those willing to go 10 campaigns at $32 million AAV. Realistically, though, the Fightins had made their $330 million investment in Harper and have shown no inclination to ink a second superstar. Continue dreaming!

While national publications believe the Phils will sign Turner, his pact at $33.5 million AAV is the problem. Yes, he hit .298, stole 27 bags with 90 percent success, drove in 100 runs and launched 21 four-baggers. But the AAV is problematic for the red pinstripes to fill their other needs and have $10 million for the trading deadline.

Fitting Dombrowski’s definition is Bogaerts, who averaged .307 and requires a seven-season deal. Moreover, his estimated asking price is $27 million AAV, which is more in line with the PBO’s big-ticket acquisitions. Like Schwarber and Castellanos, though, the PBO is planning on signing his preferred star.

Dombrowski began pursuing Bogaerts right from day one, and no other shortstops reportedly are drawing his interest. So, the PBO has already made clear where his priories are. For now, the Phillies are the front-runner ahead of the Boston Red Sox, San Diego Padres, Los Angeles Dodgers, Minnesota Twins and Chicago Cubs: advantage Fightins.

The offseason requires patience because free-agent signings move at a glacial pace, and this winter will be no exception.Translation: Dombrowski wants the best possible deal to have dollars for other shortcomings and July’s end. Unfortunately, this is cold comfort for fans who want immediate resolutions to enjoy other sports before spring training.

Me, I have no problem waiting because that’s how it works annually. And the PBO doesn’t want to overpay for one star at the expense of not plugging other holes. But what would happen if Dombrowski signed a top-tier superstar to please the locals, then they’d point to unfilled spots with ire? It would haunt him!

NEXT: 2023 Phillies: Dollars And Sense