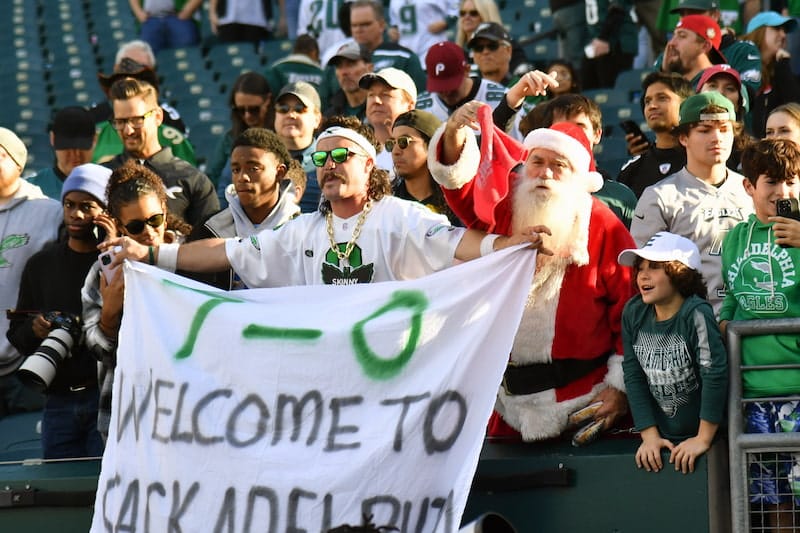 The Philadelphia Eagles (7-0) are back on the road against the Houston Texans (1-5-1) on a Thursday Night Football matchup. Philadelphia is looking to stay undefeated while the Texans badly need to make something happen. The Dallas Cowboys (6-2) and the New York Giants (6-2) continue to fight for second. The Washington Commanders (4-4) have a spark to turn their season around.

2018: The Philadelphia Eagles dominated the Houston Texans in a high-scoring matchup, 32-30. Nick Foles threw 35-of-49 for four touchdowns and one interception. Where Foles dominated, Deshaun Watson answered, but it ultimately came down to better coaching.

Both teams are hungry for a win, but for very different reasons. The Texans badly need a win in order to save their season. The Eagles badly want the win in order to continue staying undefeated. Ironically, the Phillies are the other team facing a Houston team for a much-needed win. The Philadelphia Eagles are starting to get it together. There were glimpses of greatness in recent weeks, but the Pittsburgh Steelers game put it over the top. The Texans, however, are not a team the Eagles should go easy on. This game will have great matchups with the Texans’ strong cornerbacks versus the Eagles’ unstoppable wide receivers.

If Houston leaves with a win, they have the opportunity to start saving their season. If Philadelphia wins, the team continues undefeated to push for playoffs.

Jordan Davis (ankle) is ruled out for Sunday’s game.

Josiah Scott (ankle) is ruled out for Sunday’s game.

Grayland Arnold (quad) is ruled out for Sunday’s game.

Maliek Collins (chest) is ruled out for Sunday’s game.

Nico Collins (groin) is ruled out for Sunday’s game.

Neville Hewitt (hamstring) is ruled out for Sunday’s game.

Justin McCray (concussion) is ruled out for Sunday’s game.

The Eagles are in a pretty good place following their first and most complete game last week versus the Steelers. If they execute the same way, they have the opportunity to win this game. Eagles’ defense will have to step up again to stop the run game and pressure the quarterback, Davis Mills. It is almost comical to say that the Eagles should continue doing exactly as they’re doing and limiting any mistakes and penalties.

The Texans have an opportunity to take the momentum from the Eagles by seeking out their weaknesses on both sides of the ball. One area the Eagles are struggling is special teams, so playing smart aggressive football that’ll expose those weaknesses. The Texans have a strong cornerback room, so pairing that with pressuring Hurts will force turnovers and takeaways. The idea for the Texans is to win the time of possession battle and keep the ball out of Hurts’ hands.

The Texans are having a rough season – the Eagles are not. I think the wide receivers are going to have another great game because the Texans give up double-digit points.