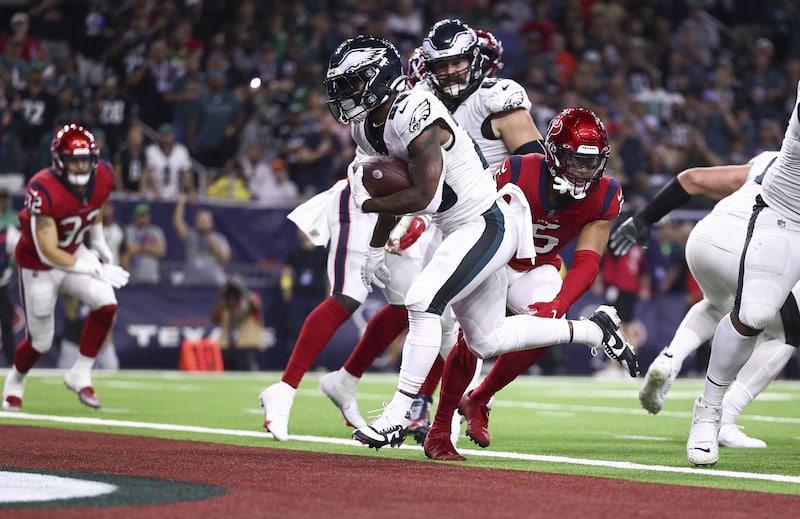 The attention of the fans in Philadelphia was split tonight, but the whole of the city was wishing ill will on the Houston sports world in either case.

As the Phillies looked to take the lead back from the Astros in the World Series, the Eagles had travelled to Houston to take on the Texans and try to remain undefeated.

The bid to remain undefeated did not start off well. Much like the Phillies ran into trouble in the first inning, the Eagles defense made some critical mistakes to allow an easy drive for a touchdown on the Texans’ opening drive.

The offense was able to answer and the Eagles defense force the Texans off the field, but after a two-play 55-yard drive, Jalen Hurts entirely missed the blitz that was setup and fumbled the ball away. Luckily, the defense was able to bail them out of the next drive and keep this from becoming a total shootout.

Unfortunately, they did nothing to stop the Texans on their final drive of the half, allowing the Texans to pull even with the Birds and burned enough clock in doing so that the offense was not able to get the yardage they needed to end the half with points.

Problems continued to strike when Jordan Mailata came out after the half looking worse than he ever has, leading to two quick sacks on three plays. The game chugged along until Chauncey Gardner-Johnson recorded an interception to set the offense up with a 20-yard field.

With two touchdowns after that and an interception by Bradberry just before the two-minute warning, this game was over with the Eagles advancing to 8-0 on the season.

This one was between either Kelce or Miles Sanders, the the ladders inability to convert on 2nd and inches with multiple attempts tips the balance in the favor of Philadelphia’s top offensive lineman. Kelce did what he does best and pulled to get blocks in the second level and springing open pretty much any runner the Eagles chose to throw in the backfield.

The Eagles struggled mightily with the running game; that was the only thing that really kept the Texans within striking distance. Hargrave played the largest role in slowing that down, recording seven tackles and getting pressures on multiple plays. His pressures resulted in three sacks as well as the first interception of the game for the Eagles.