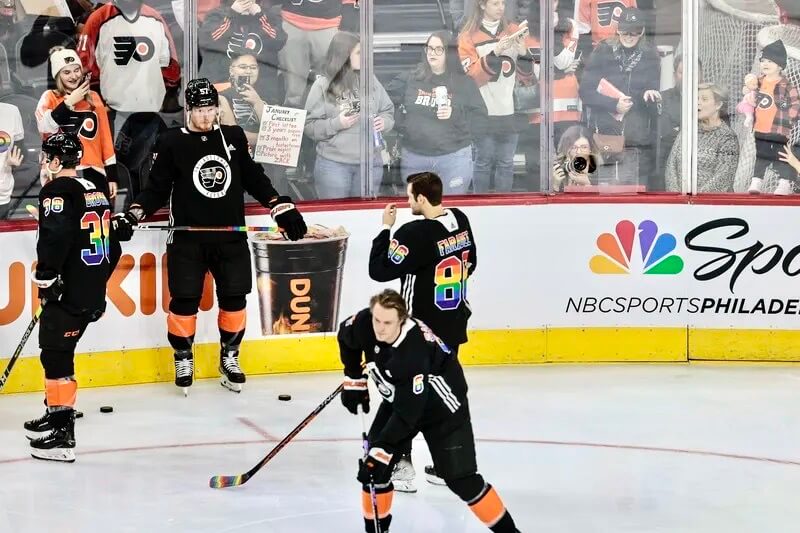 The other night Flyers defenseman Ivan Provorov chose not to wear the rainbow-themed pregame skate jersey the club asked players to don in conjunction with its annual Pride Night celebration. In so doing, Provorov managed to achieve something the Flyers organization itself has failed to accomplish in the last several years of their recently torturous existence – he made the Flyers relevant.

As has become routine by this point, once word spread via social media that Provorov remained in the locker room as his teammates skated prior to their game against the Anaheim Ducks, America took sides.  No matter where you stood in the culture war that never seems to end, you had an opinion.  And just as what occurred back in June when five members of the Tampa Bay Rays refused to wear Pride patches on their jerseys when that club held a Pride Night celebration, it seemed as if pretty much every opinion was aired ad nauseum, with emphasis on the nauseum.

Given that this time it’s the right that’s pushing back against the social messaging at the arena/ballpark (Provorov cited his religion; the Rays players did likewise), perhaps now is the moment where we can best assess the sum total of the messaging taking place at the old ballyard/arena and use this opportunity to rid ourselves of all of it.

So the faith-based community finds team-branded support of lesbian, gay, bisexual, trans, and queer rights offensive?  Fair enough.  I’m not going to argue that point.  But I’m going to take this moment to point out that there are likewise fans who find the pregame playing of the National Anthem similarly offensive.  So let’s make a deal: let’s ditch both.

As an ardent fan of both professional and college sports but much less of routinized exaltations of the military, I’ve always been a bit queasy when commanded to stand and remove my cap for the playing of the anthem.  And that was before the more recent succession of words and actions taken in the name of hyper-patriotism that have left me and some others wary of the social signaling that has come to be associated with the flag and its attendant song.  While I gritted my teeth and stood for the song for years, I’m even less enthusiastic about standing for it given the events of recent years.  In short, I find myself aligned with Giants’ manager Gabe Kapler who announced in the aftermath of the Uvalde massacre back in May that he wouldn’t be coming out for the anthem “until I feel better about my country.”

Kapler, at least, has the option of retreating to the clubhouse for his protest.  Like-minded fans, however, are compelled to endure the ugliness of their section-mates should they choose to sit during its playing (I know this firsthand).  I’ve often wondered why I’m required to choose between holding true to my beliefs and a possible punch in the mouth simply because I want to attend a game.  I shouldn’t be.

And, really, neither should Provorov.  I’m pretty sure I wouldn’t be interested in spending any time with Provorov outside of the arena and I’m just as sure he’d have no interest in hanging out with me.  But who cares.  We’re at the Wells Fargo Center for a hockey game, not to bond over social identities.

I just want to go to a hockey game.  Provorov just wants to play in one.  It shouldn’t be this hard for all of us to simply do it.  So why don’t we all just do it.