Phillies Look to Get Back on Track Against Braves - Series Preview

If the Phillies (9-12) ever needed a turnaround, this weekend is it.

After blowing a 2-0 lead in game one and 7-0 in game two of a doubleheader against the Toronto Blue Jays, both losses, the Phils are in Atlanta for a three game series against the Braves (14-11).

As dire as the Phillies week has been so far, a weekend sweep of the Braves would pull them even in the NL East standings with both teams at a .500 record.

Nola vs. Fried is the marquee matchup of the series.

Fried is 3-0 with a 1.24 ERA in 2020 and pitched five shutout innings, striking out six in a win against the Phils, which was also Spencer Howard's debut.

Nola got the Phillies on track the next night against Atlanta, pitching eight innings of one-run ball, striking out 10 in a 13-8 victory.

The Miami Marlins are calling up their top pitching prospect.

Sixto Sanchez, the main piece going to the Marlins in the trade that brought J.T. Realmuto to the Phillies, will make his major-league debut soon.

The right-hander has always flashed top of the rotation talent and, at just 22 years old, will get his chance to, one day, anchor a big league rotation without ever throwing a pitch at Triple-A.

He pitched a career-high 114 innings across two levels of the Marlins system last year, blossoming at Double-A Jacksonville. In his 18 starts, he pitched to a 2.53 ERA while allowing just 87 hits in 103 innings. He struck out 97 hitters.

With a seven game series between the two teams coming in September, it is inevitable Sanchez will face the team that signed him in March of 2015 for just $35,000.

Now the Phillies need to #SignJT.

The Phillies and Toronto Blue Jays are set to play a doubleheader at Sahlen Field in Buffalo, NY with game one beginning at 1:07 pm ET.

Both games will be aired on NBCSP (tv) and WIP/WTTM1680 (radio) with game one also being televised on the MLB Network.

With the new rules put in place for the shortened 60-game season, both contests will be seven innings.

Sahlen Field is normally the home of the Triple-A Buffalo Bisons, an affiliate of the Blue Jays, but the team had to find a new home field for 2020 given the travel restrictions caused by COVID-19.

The ballpark plays to the Phillies strength, as it has been a home run haven so far. There have been 25 home runs in the five games played there. The Phils lead the league in runs scored per game, are second in OPS, fifth in batting average, 10th in doubles per game and eighth in home runs per game.

While the Jays average more homers per contest, their other offensive statistics are at or below the middle of the pack.

Toronto's offense will also be missing it's best overall player and offensive catalyst, SS Bo Bichette, who was placed on the 10-day IL at the beginning of the week with a knee sprain. Bichette was off to a great start, hitting .361 with five home runs and 13 RBI. He's also stolen four bases.

It's Phil Gosselin's World, We're Just Living In It 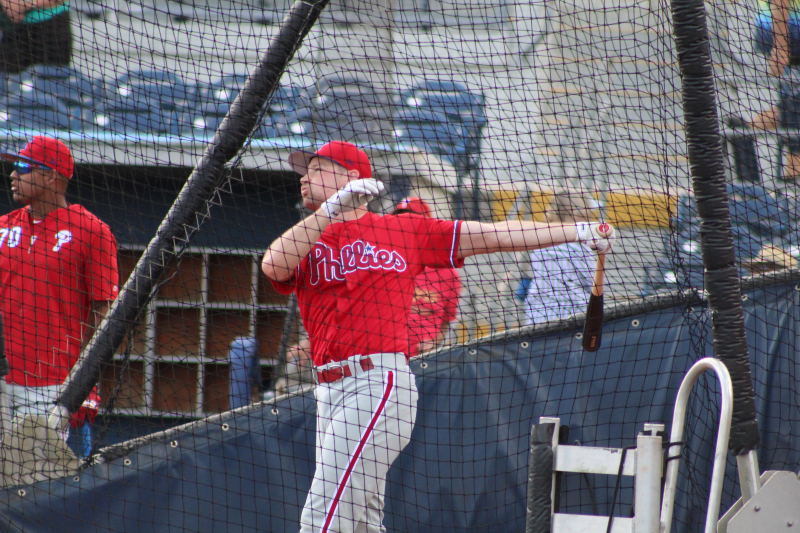 The kid out of Malvern Prep High School has done it again.

Phil Gosselin has been in the big leagues for parts of eight seasons, only appearing in more than 46 games once. The Phillies signed Gosselin in December of 2018 to a minor-league contract and was retained on the same type of agreement one year later.

The signing has already paid big time dividends for the Phillies.

Gosselin, a former fifth-round pick by the Atlanta Braves, was asked to pinch hit for fellow righty Scott Kingery in the sixth inning of the Phillies 13-6 win over the Boston Red Sox Tuesday night and he delivered... twice.

First, he made it a one-run game with a double hitting for Kingery and, in the seventh, added an insurance run with a solo homer, his third of the year.

On the season, Gosselin is slashing .429/.500/.857 with three home runs, three doubles and eight RBI. All this in just 32 plate appearances, sixth fewest on the team.

Against right handed pitching, Goose (as the kids say...) is hitting a respectable .255 as a Phillie (3-for-9 in 2020), while crushing lefties at a clip of .370, although he has more at-bats against righties during his time in Philadelphia.

With all this mashing, why doesn't Gosselin see more playing time?

The Phillies are shaking up the bullpen.

Phillies have made the following roster moves: pic.twitter.com/sC9lKshyCi

Our own Frank Klose reported the news about Parker.

Trying to confirm but I’m heading if a Phillies bullpen transaction; Blake Parker may be involved.

Phillies Look to Get Back to .500 Against Orioles

On the heels of a dominating, but way too close (looking at you, Nick Pivetta) 13-8 win over the Atlanta Braves Monday night, the Phillies (5-6) host the rebuilding Baltimore Orioles (7-7) for a three game series at Citizens Bank Park.

This will be the first game for the Orioles since Aug 8, although they played the next night, albeit the game is currently suspended in the sixth inning. They won their previous two games, both against the Washington Nationals, by a combined score of 16-3.

The club gave Aaron Nola his first win in 356 days and will look to continue that momentum for a pitcher that has yet to lose a game in a Phillies uniform, RHP Zack Wheeler.

Wheeler (2-0) has looked every bit as sharp as advertised since the Phillies signed him to a five-year $118 million contract this past offseason. He has pitched to the tune of a 2.08 ERA, 1.15 WHIP and has struck out six hitters across his 13 innings. He will have to tame an Orioles offense that has been surprisingly good this season, scoring 4.64 runs per game, 13th best in all of baseball. For comparison, the Phillies rank seventh in that department, averaging an even five runs per contest.

Continue reading "Phillies Look to Get Back to .500 Against Orioles" »

The Phillies (4-6) have not won a game started by Aaron Nola since Aug 20, 2019. That is almost a calendar year across nine starts.

If the Phils want to contend for a playoff spot this season, that trend needs to end Monday night when the final game of a four game series against the Atlanta Braves (11-6) gets underway at 6:05 ET.

Nola will look to build on his last start, where he held the New York Yankees to one run on three hits while striking out 12 across six innings. Overall, Nola is 0-2 on the season with a 3.97 ERA, 0.79 WHIP and 19 strikeouts over 11 1/3 innings.

For his 18 career appearances against the Braves, the righty is 10-5 while sporting a dazzling 2.94 ERA, his best against any team in the National League East.

The Rocky, Yet Promising Debut of Spencer Howard

One start does not a career make.

The same is true regardless of outcome.

Spencer Howard made his much-anticipated big-league debut Sunday against the Atlanta Braves and, against one of baseball's best offenses, showed signs of the ace he could become, but had mixed results.

"I was hoping for a complete-game shutout," Howard said in a post-game video conference. "That's what everybody would dream about. But just being able to compete at the highest level again, a dream come true. It's just exciting to be out there and face an All-Star lineup."

He finished 4 2/3 innings, throwing 81 total pitches, 51 for strikes. He threw a first pitch strike to 77 percent of the hitters he faced. His fastball averaged 93.5 mph and his secondary pitches, while inconsistent, showed they belong in the majors.

Continue reading "The Rocky, Yet Promising Debut of Spencer Howard" »

After playing the best game of their season Friday night, the Phillies (4-4) will host another seven-inning doubleheader Sunday against the NL East rival Atlanta Braves (9-6).

Jake Arrieta dazzled on Friday, throwing six shutout innings while striking out six in the Phillies 5-0 win over Atlanta. The red hot J.T. Realmuto hit his fourth homer of the season while Jay Bruce added a three run shot of his own. The bullpen combination of LHP Jose Alvarez, RHP Tommy Hunter and RHP Deolis Guerra, the latter of whom displayed a filthy changeup, threw three scoreless innings to lock down the dominating victory.

Sunday represents a tale of two stories on the mound for the Phillies. One of redemption and the other promise. RHP Vince Velasquez may be pitching for his spot in the rotation while top prospect RHP Spencer Howard will make his major-league debut and look to take that very position on the starting staff from Velasquez.

We have written extensively about Howard and his potential in the rotation over the past week.

First pitch is scheduled for 1:05 pm while the second contest will begin roughly 40 minutes after game one. Both will air on NBCSP (tv) and WIP/WTTM1680 (radio) with the first game getting national tv attention via TBS.

The Phillies have been postponed... again.

Friday night's game between the Phils and Atlanta Braves has been rained out; it will be made up as a doubleheader on Sunday, both games being seven innings.

Vince Velasquez was scheduled to pitch, but will now take the mound for one of the two Sunday games. The Philliedelphia faithful believed Velasquez was on a short leash and may have lost his rotation spot had he pitched poorly.

Is Vince Velasquez pitching for his rotation spot tonight against the Braves?

Manager Joe Girardi has also announced Jake Arrieta will start Saturday's 6:05 pm game against the Braves, but has not named a starter for the other end of the doubleheader.

Some believe it could be top prospect Spencer Howard.