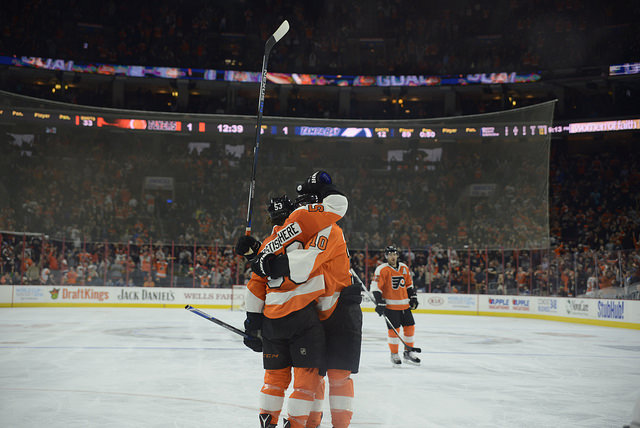 In a lot of cases this season, when the Flyers have needed a big goal, their rookie sensation has stepped up.

Shayne Gostisbehere entered Monday's game with 12 goals on the season, and all 12 had changed the lead in a game, either by tying things up or giving the Flyers the edge.

You can add two more to that total. Gostisbehere struck twice and helped lead the Flyers to a 4-2 win over the Tampa Bay Lightning on Monday night at Wells Fargo Center.

Ugly loss to Oilers knocks Flyers farther back in standings 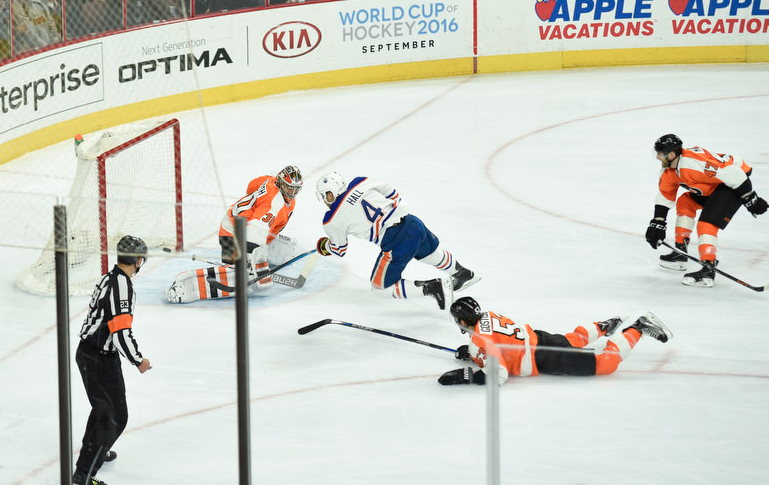 Make no mistake about it, the Flyers controlled the second period of play on Thursday night. They really could have scored three of four times by the time Shayne Gostisbehere lost control of the puck at the blue line, allowing Taylor Hall to storm in on a breakaway and score the Oilers second goal of the game.

The Flyers were a shell-shocked team from there.

With several chances to scratch and claw their way back into the game, they let the game turn into one of their worst of the season, at least in terms of what the scoreboard showed after the game.

The 4-0 loss not only hurt the good vibes and strong spirit that the Flyers had shown in recent days. It proved to hurt in a place where it mattered much more: the standings. 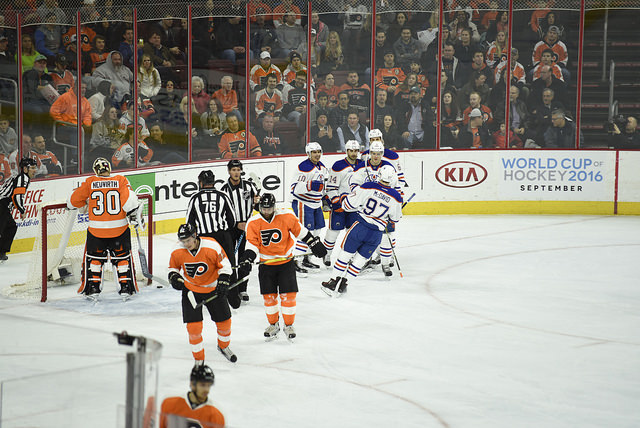 With the first three games of the homestand going as well as you could hope, the Flyers were bound to face some adversity sometime soon.

Thursday night, they faced plenty of it, too much to overcome.

The Oilers struck midway through the first and twice in short order in the second and rolled the rest of the way behind Cam Talbot to secure a 4-0 win over the Flyers on Thursday night at Wells Fargo Center.

3rd-period rally not enough as Phantoms edged by Hartford 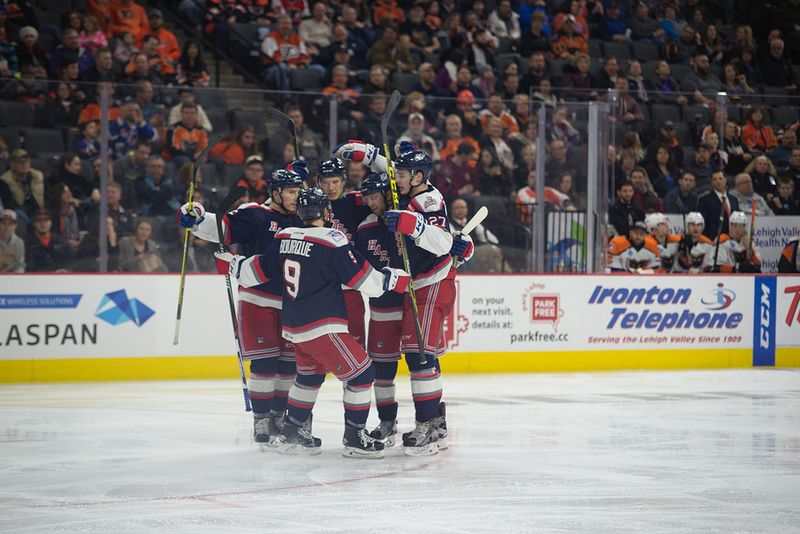 Points are the name of the game for the Lehigh Valley Phantoms. Tonight they got one, but it easily could have been two.

The Phantoms failed to score on a four-minute power play in overtime, and the Hartford Wolf Pack won the shootout, 2-0, to collect a 3-2 victory at PPL Center on Friday night. 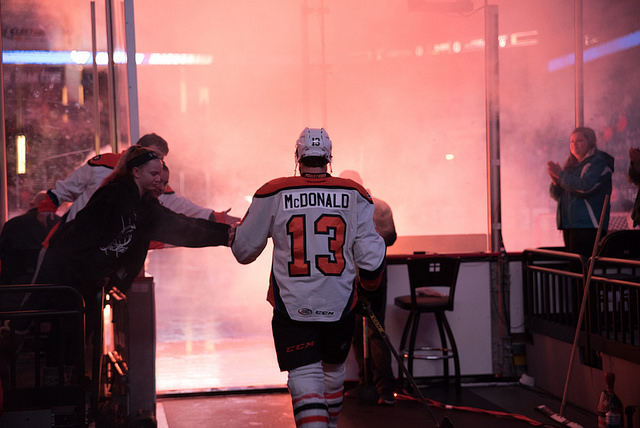 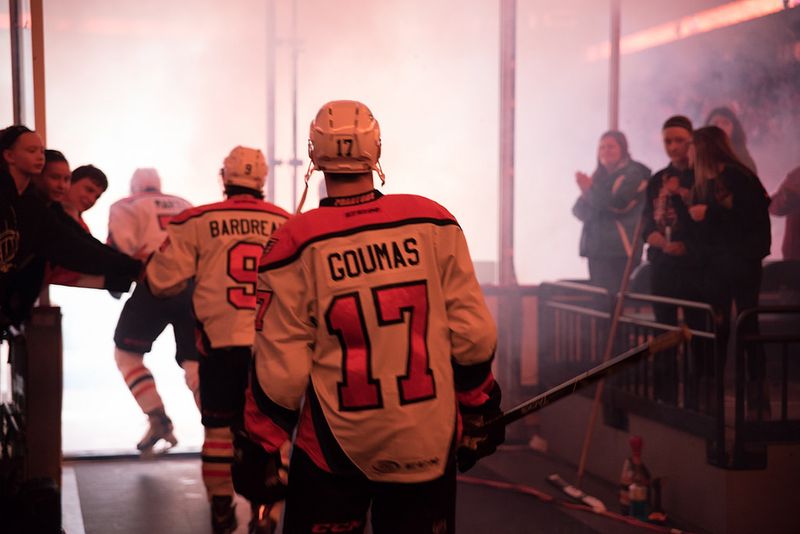 A win. The one thing the Lehigh Valley Phantoms had been fighting for finally came. 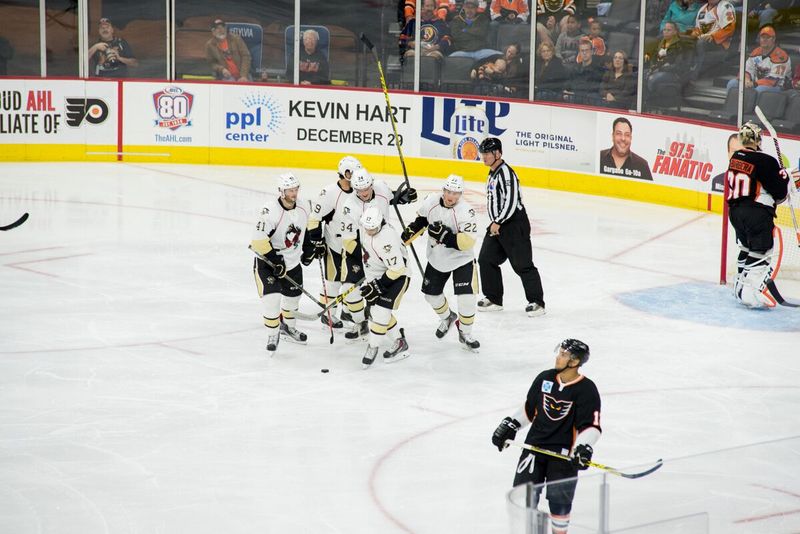 Forrest Gump once said: "Life is like a box of chocolates, you never know what you're gonna get." The same could currently be said for the Lehigh Valley Phantoms. From night to night, you just don't know what kind of performance they'll have. After a morale boosting overtime defeat of the Hershey Bears on Wednesday, the Phantoms were looking to defeat one of the AHL's top teams in the Wilkes-Barre/Scranton Penguins.

They were behind practically from the start.

Dominik Simon and Scott Wilson each had 2 goals, and Matt Murray had 23 saves for his 4th shutout of the season as the Penguins downed Lehigh Valley 4-0 Friday night at PPL Center.

It didn't take long for the Penguins to get on the board. Two seconds after Taylor Leier finished serving a high-sticking minor, Simon tipped a Tim Erixon point shot over the shoulder of Anthony Stolarz. Kevin Porter also collected an assist. It seemed everyone thought Simon's stick was above the crossbar, and Stolarz protested to the referee. The goal wasn't reviewed and allowed to stand.

The Penguins made it 2-0 12:10 later on Wilson's 12th of the season when he one-timed a pass from Conor Sheary at the top of the near circle past Stolarz. Derrick Pouliot also collected an assist. The Phantoms power play continued to be an issue, going o-2 in the period. (They would wind up going 0-7 on the night.)

Lehigh Valley hit five post on the night, but their best chance came when with 6:05 left in the second period, Tim Brent had a one-timer from the faceoff dot beat Murray over the shoulder but hit the corner of the post. Ten minutes later, Dominik Simon got his 11th of the season when he took a Carter Rowney pass that went through the legs of Sam Morin. Simon took the  shot and buried it past Stolarz. Will O'Neill picked up the secondary assist.

Conor Sheary almost made it 4-0 29 seconds into the final frame. Morin turned the puck over in the slot, but Sheary wristed the puck off the crossbar. The puck bounced into the crease, but Anthony Stolarz fell on to the puck.

In the third, the Phantoms had a glorious chance to close within two goals. They had a beautiful two on one, but Taylor Leier shanked the shot attempt and sent the puck fluttering to the corner.Wilkes-Barre/Scranton closed out the scoring on a beautiful passing play between Sheary, Tom Kostopolous, and Wilson. Sheary went for a spin in the slot and found Kostopolous, he made a cross slot pass to Wilson who was breaking to the far post. Just like that, it was 4-0.

Notes: Cole Bardreau returned to the lineup after missing 13 games. He took the roster spot of Jay Rosehill, who returned to being a healthy scratch. Tim Brent left in the second period and did not return. After the game, Head Coach Scott Gordon would not confirm if it was the same injury that caused Brent to miss Wednesday's game. It wad the first time this season that Anthony Stolarz had allowed four goals in a game.

Quotes: Mark Alt, on the benefit of playing the next night after a loss: "Yeah, that's the beautiful thing about hockey sometimes. You can forget a game pretty quick. We can lern from tonight, we can watch film tomorrow, but in the end we'll get back to it tomorrow with a better mindset and be ready to go."

Scott Gordon, on the power play: "The power play, we spent almost the entire time in the offensive zone. We did a great job of battling, but we just didn't score. Hit a couple posts. Usually when you have that much offensive zone time on the power play, I thought our guys did a good job of keeping possession but ultimately we couldn't get one past their goaltender. When that type of stuff happens it's probably not your night."

On how the score wasn't indicative of his team's effort: "It wasn't a 4-0 game, we clearly spent a lot of time in the offensive zone tonight. I think an indicator of that is the amount of penalties we drew tonight. I liked the pace that we played at. We didn't spend a lot of time in the defensive zone. The result isn't wanted, but the work ethic was there Wednesday and tonight and another indicator is the fact that we gave up 20 shots. When you can do that in back-to-back games against two good team, you're doing something right. The end result doesn't look that way, but for me it's a sign of our team heading in the right direction."

Up Next: The Phantoms will have less than 24 hours to rest up as they faceoff with the Springfield Falcons at 7:05.

Lehigh Valley Comes from Behind to Trap Bears in OT 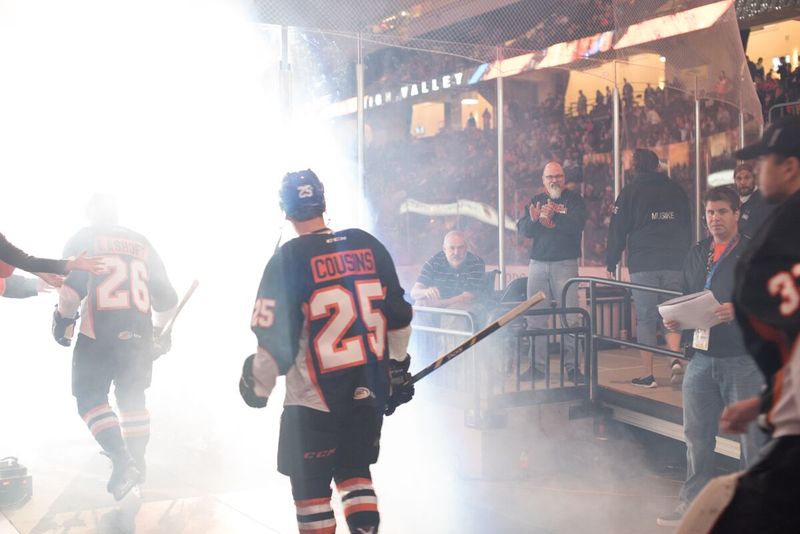 The Lehigh Valley Phantoms were looking for revenge after last Saturday's overtime defeat to the Hershey Bears.

Thanks to Nick Cousins, they got it.

Petr Straka and Danick Martel scored third period goals to erase a two-goal deficit, and Cousins scored 3:45 into overtime to secure a 3-2 victory on Wednesday night at PPL Center. 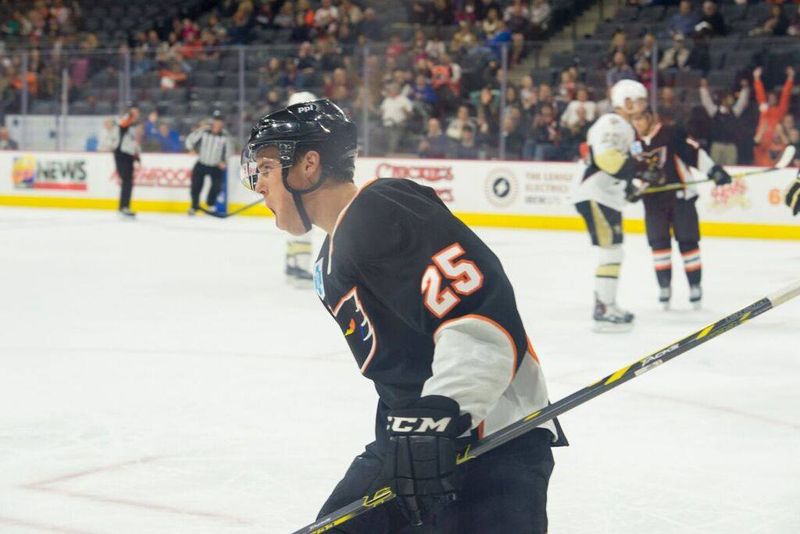 The Lehigh Valley Phantoms had been on a roll coming into Saturday night's. Anthony Stolarz had been incredible between the pipes, and they were getting scoring from nearly everyone on the roster. The power play had continued to struggle, just as it had for most of this campaign.

Saturday's game was much of the same, as the power play went 0-for-5 and Stolarz made 42 saves. Chris Bourque scored with 20.4 remaining to give the Hershey Bears a 2-1 victory on Saturday in Hershey.