The Flyers agreed to terms and avoided arbitration with a young goaltender, signing Alex Lyon on Saturday to a two-year contract. The deal carries an average annual value of $750,000.

As an NHL rookie last year in his second season as a professional, the 25-year-old netminder went 4-2-1 with a 2.75 GAA and .905 save percentage in 11 games. He earned his first win on Feb. 18 in a 7-4 win against the New York Rangers, after stepping in for an injured Michal Neuvirth.

Flyers blanked by Penguins in Game 4, 5-0 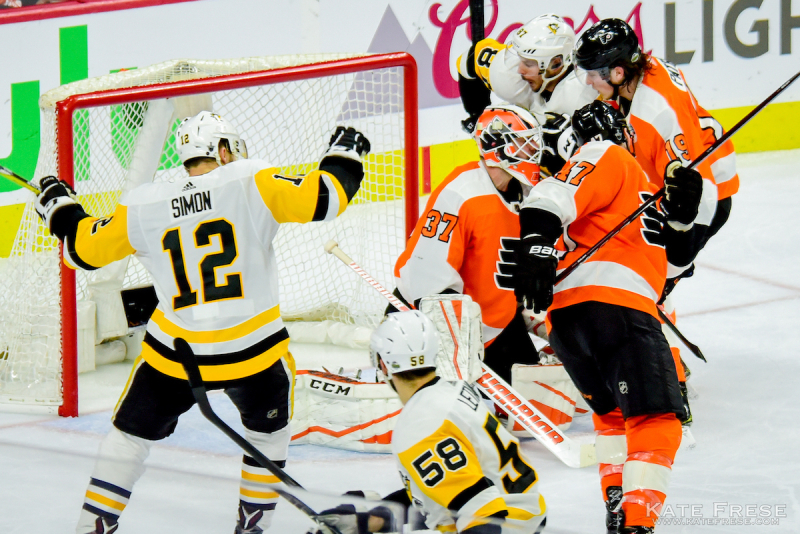 Murphy's Law has long stated that anything that can go wrong will go wrong, and as the Flyers looked to shift momentum with a Game 4 home game, that held true.

Missteps and mistakes early on came back to haunt them in quick order, as Pittsburgh took control of the game early. Not much could go right for the Flyers, and they fell, 5-0, to slide into a 3-1 series hole. 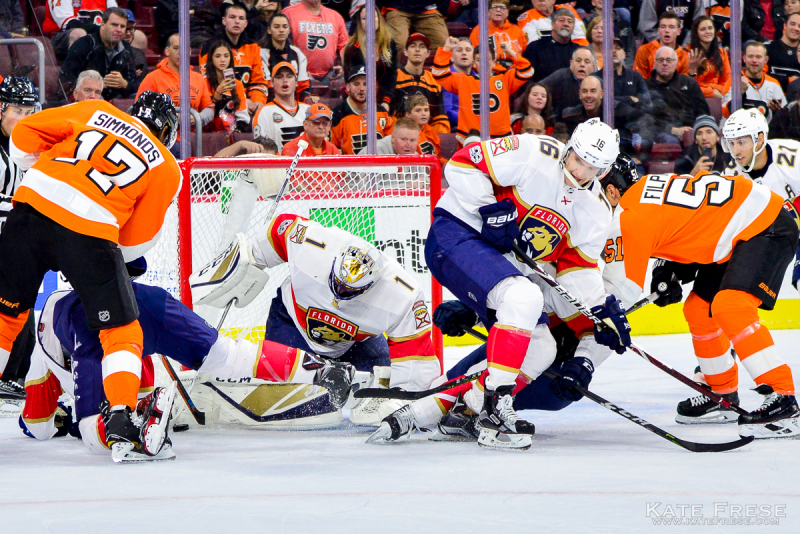 Hockey season is 82 games long, but for the Flyers, there's an outside chance it could get a tad longer.

With the Eastern Conference's final playoff spot still hanging in the balance, the NHL announced on Friday that a play-in game between the Flyers and Florida Panthers -- essentially, Game 83 -- could go down under the right circumstances. It's a long shot, and would require several highly specific outcomes, but the possibility is out there.

Over the past few games, one of the Flyers' chief concerns has been an inability to play a full 60 minutes. Decent play for the first two periods, until a collapse in the 3rd.

Thursday's game was a bit of an exception to the rule, as the Flyers got off to (yet came close to recovering from) a sluggish start, one that saw them yield two goals in an 11-second span. Cam Atkinson also helped sink them with a hat trick, giving the Blue Jackets a tight 5-3 win. 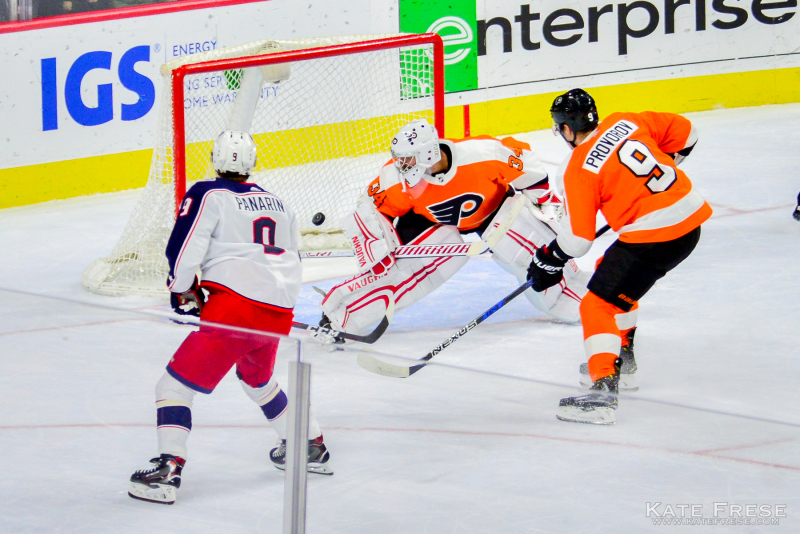 With the regular season winding down, the Metropolitan Division is in an absolute dogfight to the finish. In the third playoff spot, the Flyers sit four points behind Pittsburgh and Washington with 81 points, while New Jersey (80 points) and Columbus (79) sit right on their heels in both wild card spots.

For the Flyers, they have a chance to gain some ground, hosting that same Blue Jackets team that can tie them with two points. Though the Flyers snapped a five-game skid last weekend, they took a step back with a home loss to Vegas, so they'll take all they can get here.

Flyers toppled by Lightning in shootout, 7-6

As the Flyers played out of their minds over the month of February, they were humbled in their last game by Carolina. Not the prettiest game, but they had a quick chance to bounce back in a tough measuring-stick game against a vaunted Tampa Bay team.

Through two periods and part of the 3rd on Saturday, it looked like the Flyers could keep pace with a tepid-paced Lightning offense. A three-goal period, from JT Miller, Victor Hedman and Steven Stamkos, nearly sank them, but Claude Giroux's goal tied it late in the 3rd period helped get them a point in a wild 7-6 shootout loss.

Over the course of his NHL career, Justin Williams has solidified himself as a decent, serviceable player, and seemingly always finds a way to produce against the Flyers -- getting revenge time and time again for them trading him in 2004.

Fourteen years after that fateful trade, Williams continued that trend yet again on Thursday, scoring two goals and picking up an assist along the way en route to a 4-1 Hurricanes win.

It's no secret that the Flyers have been playing outright incredible hockey over the month of February, and they were rewarded after Monday's win against Montreal with first place in the Metro Division.

Because of the idiosyncrasies involving the NHL's schedule, they've lost that along the way to Washington, but sit just one point away. They have a chance to reclaim first place tonight against Carolina, and with Washington out of commission until Saturday, it could last a bit longer. 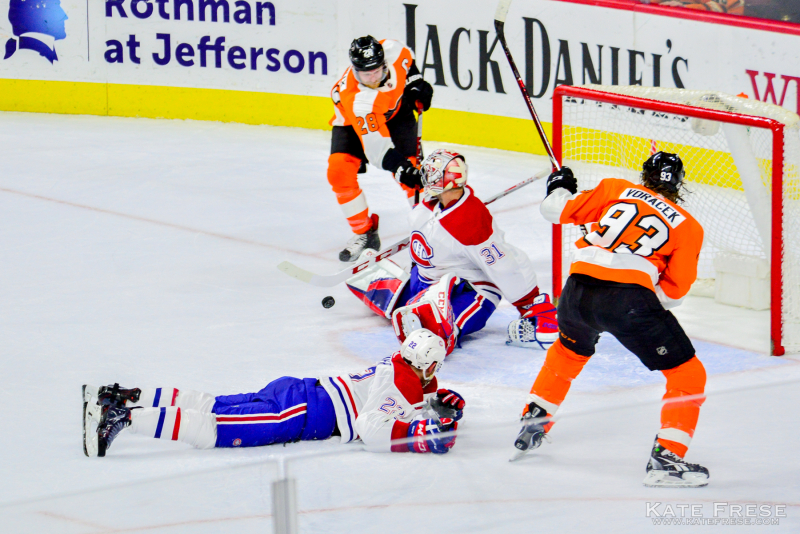 It's always a given in hockey that you can try and dominate possession, get shots to the net and do everything needed to win the game, but still come up quite short.
For the Flyers, that was about 85 seconds away from happening on Tuesday, but they pulled through.
Jakub Voracek tied the game late in the 3rd period, and followed up 1:26 into overtime to give the Flyers a dramatic 3-2 win.

There's no such thing as a convenient time for injuries to mount. And when you're a team looking to extend a point streak to nine games, you'll have to shake things up to have a chance to do that.

The Flyers changed several things up on Monday, acquiring Petr Mrazek from Detroit and recalling Oskar Lindblom from Lehigh Valley. Lindblom replaces Wayne Simmonds, who will be sidelined from 2-3 weeks, while Mrazek provides stability in net for the next few weeks as Michal Neuvirth and Brian Elliott recover.

Off the heels of an exciting 7-4 win against the Rangers on Sunday, the Orange and Black have a chance for points in their last nine games. That opportunity comes against the Montreal Canadiens, who six just six points away from the Eastern Conference's basement. This will be the second of three meetings this month between the Flyers and Habs, as they move through their season series pretty quickly.